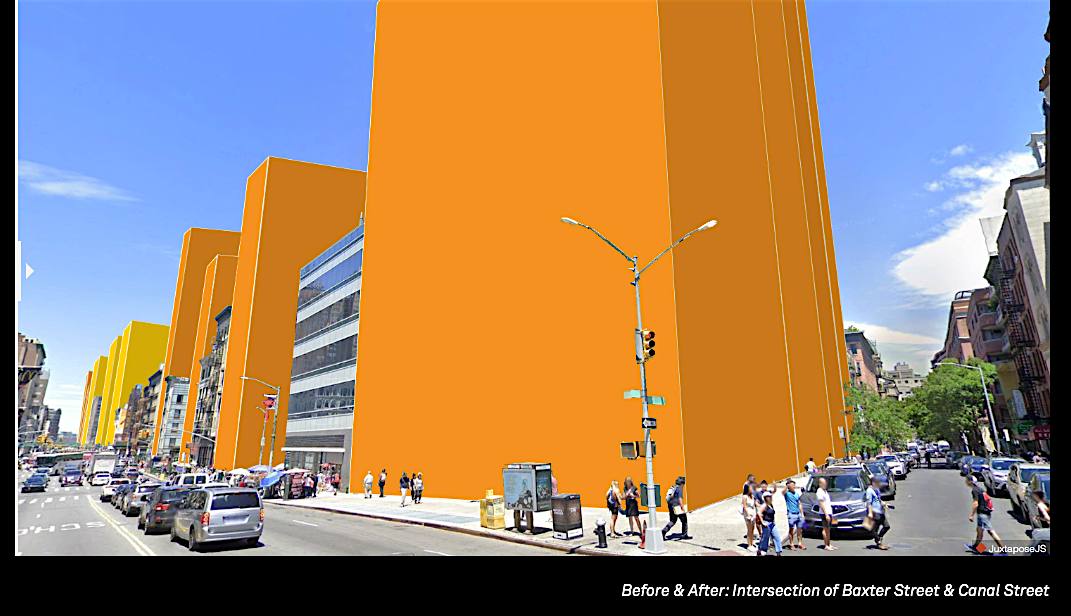 What Baxter and Canal Sts. could look like after the Soho/Noho rezoning, according to the Municipal Art Society. Orange sites represent "projected development" and yellow ones "potential development."

BY THE VILLAGE SUN | Updated May 4, 3:15 p.m.: On Monday afternoon, amid snowballing opposition to the proposed Soho/Noho rezoning, the city balked on certifying the plan, which had been set to occur. No explanation was given why.

The move — or lack of a move — on the city’s part comes hot on the heels of a community lawsuit filed last Friday by the Soho Alliance and Broadway Residents Coalition, accusing the de Blasio administration of “abuse of power.” Specifically, the suit charges that the city failed to provide a required full project summary of the proposed rezoning to Community Board 2 four weeks prior to the certification, and also that ULURP meetings for the rezoning must be held in person, not virtually on Zoom.

The proposed rezoning would be the first of its kind in the city, in that it would upzone a landmarked historic district.

Certification of the rezoning would have kicked off a seventh-month-long ULURP, the city’s land-use review process, for the plan. A new date for the certification has not been made public.

However, Andrew Berman, executive director of Village Preservation, which has been one of the fiercest critics of the rezoning for the famed landmarked district, said the clock is now winding down on the mayor’s effort to push through the plan before de Blasio and much of the current City Council are term-limited out of office at the end of the year.

“They clearly have a limited time frame,” Berman told The Village Sun. “There are at most one, possibly two meetings in which they could certify the plan and have time to vote on it before the end of the year. It’s not like the plan dies by the end of the year, but it would be different people. They obviously want the people there now to do it.”

The Department of City Planning for the past month had on its agenda to certify the ULURP for the rezoning of Soho and Noho on Monday. At the public hearing, however, City Planning announced it was not certifying the ULURP, without giving a reason.

City Planning will reportedly have its next public hearing on May 17. It is unknown if the certification will be on the table that day.

Regarding having “different people” in office, one leading mayoral candidate, Andrew Yang, recently came out in favor of the rezoning, remarking that no affordable housing has been built in the landmarked enclave. But Berman noted that the rezoning would surely displace many of the existing low- and moderate-income residents in more than 600 rent-regulated units, including many Asian Americans living in the rezoning area’s southeastern corner, basically Chinatown, where the most projected development would occur.

“These are many of the people who turned out at the hearings on the rezoning,” he noted.

Village Preservation has also put forward an alternative community rezoning for Soho and Noho that calls for deeper affordability than the city’s proposal, but which would not upzone the areas the way the city’s plan would. Berman said he hopes Yang considers their alternative plan.

In addition to the community lawsuit, the respected Municipal Art Society — the group that famously fought with Jackie Onassis to save Grand Central Terminal from the wrecking ball — recently released a highly critical report of the rezoning, urging the city to slow down its mad dash to ram the scheme through to approval before the mayor leaves office. The rezoning proposal over all “lacks clarity” and would likely result in unforeseen consequences, including development on sites not foreseen by the city, M.A.S. warned.

In addition, two of the city’s oldest and largest tenant groups, Tenants Political Action Committee and Met Council Action, on Monday came out with a devastating op-ed in the Daily News calling the Soho/Nobo plan “A rezoning wolf in sheep’s clothing.”

The column notes that the rezoning would incentivize developers to demolish rent-regulated units in Soho since it would allow them to build taller than they could now. Also under the plan, the column notes, developers could build 25-unit buildings or rooftop additions of the same size without including any affordable units.

“From Soho to Gowanus, from Crown Heights to West Harlem, de Blasio is trying to push through a few last rezonings before he leaves office,” Esteban Giron and Tiffany Ann Kahn write in the op-ed. “The result: more market-rate housing, more money in the pockets of developers, and scraps of ‘affordable’ housing for working Black and Brown New Yorkers.

“In sum, the Soho/Noho plan is a wolf in sheep’s clothing,” the op-ed accuses. “We call on City Councilmembers Margaret Chin and Carlina Rivera, as well as Manhattan Borough President Gale Brewer, to stop this and similarly disastrous rezoning plans.”

In recent weeks, other influential groups have also come out against the rezoning, including  the National Trust for Historic Preservation and the Preservation League of New York State.

Asked if it looks like the city is now faltering in its push for the rezoning, Village Preservation’s Berman said, “I don’t know. All I know is they blinked. They didn’t certify — and clearly opposition is growing.”