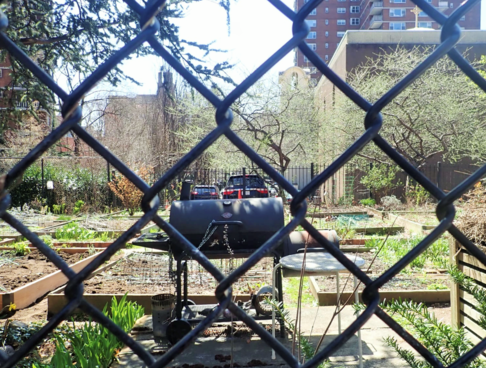 Exhibit A: The BBQ grill in the private garden. A new garden will be added — but without a barbecue. (Courtesy Democracy in Penn South)

Privilege amid the petunias at Penn South: Co-op’ers fired up over exclusive BBQ garden with ‘lifetime membership’

BY THE VILLAGE SUN | The allegedly unfair use of a green space at Penn South has some co-operators seeing red.

A garden founded decades ago at the sprawling Chelsea affordable co-op development has reportedly become a floral fiefdom.

Called the Intergenerational Garden, it’s become the “private paradise” of its few members, with its gates locked to everyone else at Penn South, critics charge.

The contentious community garden is a space owned in common by all the residents and subsidized by tax relief but is off-limits to all but 100 of about 5,000 co-operators.

Now a group of residents has started a petition calling for the garden’s gates to be open to all.

Judy Cohen, the moderator of The Penn South Post Facebook group for Democracy in Penn South, filled The Village Sun in on the background of the exclusive, members-only green space and where things stand now.

In the mid-1980s, a committee of Penn South residents designed and built the community garden. A two-year rotation was set to ensure that all who were interested would have the opportunity to participate.

At some point, though, in a brazen coup amid the cucumbers, those with plots unilaterally decided to suspend the rotation. Consequently, they now hold their plots in perpetuity. On top of that, a barbecue grill was installed, adding to the garden’s appeal but to the gall of those not in the insiders group.

As a result, the outcome was lifetime access to a social gathering spot for 100 co-operators, while the rest of the residents — almost 50 times as many people — were barred from entry. The waiting list for the coveted BBQ hot spot has since reportedly ballooned to about 230 people. Meanwhile, some gardeners have been living it up, kicking back in their privileged plots for as many as 25 years.

“We don’t know the length of time exactly, because the board keeps the list of gardeners secret,” Cohen noted.

However, to address the waiting list for the existing garden, rather than modifying these special privileges, the board has approved a second garden, with a rotation for residents’ use — though, without a barbecue — right across the street from the original one.

In turn, more than 50 fed-up Penn South cooperators signed a letter protesting the inequity, which was sent to the complex’s board of directors. They requested that the flap be discussed during open session at the board’s Jan. 18 meeting. But, in a Jan. 20 letter response, the board — satisfied with the current plan — curtly retorted, “As the issue has been addressed on many occassions, we consider the matter closed.”

Opponnents bristeled at the brush-off. According to Cohen, it was telling the protesters that “their concerns didn’t warrant consideration,” on top of not even being “a real response.”