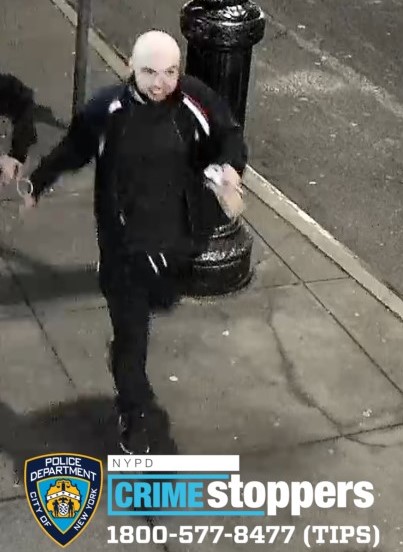 A surveillance camera image of the alleged attacker. (Courtesy N.Y.P.D.)

Police are seeking the public’s help in finding a man wanted for a recent stabbing in Washington Square Park.

According to cops, on Fri., March 18, around 2:30 a.m., a stranger approached a 19-year-old man inside the Greenwich Village park and got into a verbal dispute with him.

As things turned physical, the stranger drew a knife and slashed the victim across the left side of the face, causing a deep laceration. The attacker fled eastbound on E. Eighth Street.

News reports said the assailant was angered after the victim — who is from New Rochelle and was smoking pot by the fountain with two women — would not give him some of his weed.

The victim was transported by E.M.S. to Bellevue Hospital in stable condition.

The suspect is described as around 20 to 30 years old, 5 feet 11 inches tall, weighing 190 pounds and last seen wearing all black.

Police released a photo and video of the wanted man.