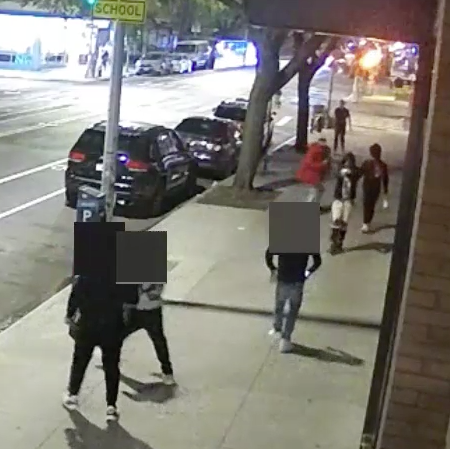 A surveillance video shows one of the suspects firing a shot at Tyrell Williams, 26. (Courtesy N.Y.P.D.)

Police recently released surveillance video and photos of suspects in the possibly gang-related slaying of an East Village man on Sun., Oct. 11.

Tyrell Williams, 26, of 279 E. Fourth St., was shot around 1:20 a.m. that day. Responding police found him near the corner of E. 13th St. and Avenue A, unconscious and unresponsive with a gunshot wound to his chest. E.M.S. transported Williams to Mt. Sinai Beth Israel Hospital, where he was pronounced dead.

The video clip, taken from near the incident location, according to cops, starts with three young men entering a bodega and jovially holding out their hands to get spritzes of sanitizer from the counter clerk.

The clip concludes with another trio of men walking toward the suspects, one of whom pulls out a gun and, holding it with both hands, blasts the apparent fatal shot. As the shooter pulls out the firearm and aims at the victim, the victim’s two sidekicks quickly dart toward the curb, trying to duck out of harm’s way.

According to the Daily News, police sources said the murder may have been gang-related and that Williams belonged to a local clique called the YG Bloods.

There are no arrests at this time. The investigation is ongoing.