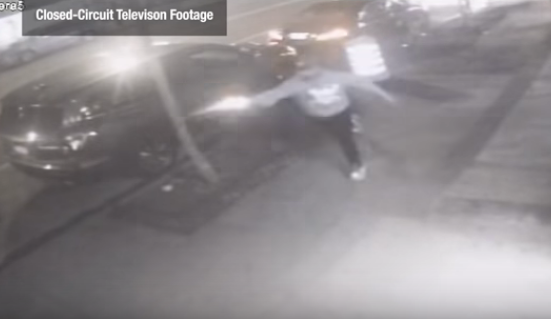 Police release video of cop-involved shooting on Avenue A

BY THE VILLAGE SUN | On Thurs., Feb. 20, police released body-camera footage from two Ninth Precinct police officers who were involved in a fatal shooting in the East Village on Jan. 9.

According to police, the incident began around 3:30 a.m. after two men — Earl Facey, 37, and Richard Reid, 41 — got into an argument inside Hayaty, a hookah bar at 103 Avenue A, near the southwest corner of E. Seventh St.

The dispute continued outside on the sidewalk, where, as shown in the footage, they both pulled out .22-caliber handguns and started blasting.

Facey chased Reid around a parked car as the two men fired shots at each other. Reid then sprinted off up Avenue A but Facey chased after him, shooting him in front of Ray’s Candy Store, at 113 Avenue A, near the intersection’s northwest corner, where Reid collapsed on the sidewalk.

Two uniformed officers, Liam Murphy and Christopher McGloughlin, were patrolling Tompkins Square Park in a squad car when they heard the gunshots. Quickly responding to the scene, they found Facey firing at Reid, police said.

The body-cam video shows the two cops repeatedly ordering Facey, “Get down on the ground!” But he fails to comply and continues walking south on Avenue A — with his back to the officers and his hands in front of him. He then starts to cross E. Seventh St., heading west to east.

According to police, Facey then stretched out his left arm, at which point, the officers fired their guns at him — Murphy shooting twice and McGloughlin once — striking Facey in the left hand and back. He fell facedown in the crosswalk.

Facey was transported to Bellevue Hospital where he succumbed to his injuries. Police said the autopsy and forensic examination revealed Facey also was shot twice by Reid with .22-caliber bullets — in his chest and thigh — in addition to the shots fired at him by police.

Responding officers performed CPR on Reid and he was transported to Bellevue, where he died of his injuries. An autopsy and forensic examination revealed Reid was struck once in the back by a .22-caliber bullet.

Facey and Reid each had a .22-caliber Northern American Arms revolver with five discharged shell casings, police said. The miniature guns can only fire a maximum of five shots, so both men had emptied their weapons. One of the firearms was recovered from underneath Facey’s torso while the other was found near Reid’s body.

The investigation remains ongoing by the New York Police Department Force Investigation Division and Manhattan District Attorney’s Office. Follow-up interviews are still being conducted and video is still under review.

After the investigation is complete, the facts of the case will be presented to the First Deputy’s Commissioner’s Use of Force Review Board, where the evidence will be evaluated to determine whether the shooting was justified and within department guidelines.

All N.Y.P.D. patrol officers are now equipped with body cameras.

According to the police, “The benefits of cameras are clear: transparency into police activity, de-escalation of police encounters and accountability for police officers, through an independent account of interactions between the police and the citizens they serve. Body-worn cameras serve as a vital part of ongoing efforts to increase trust between the police and all New Yorkers.”