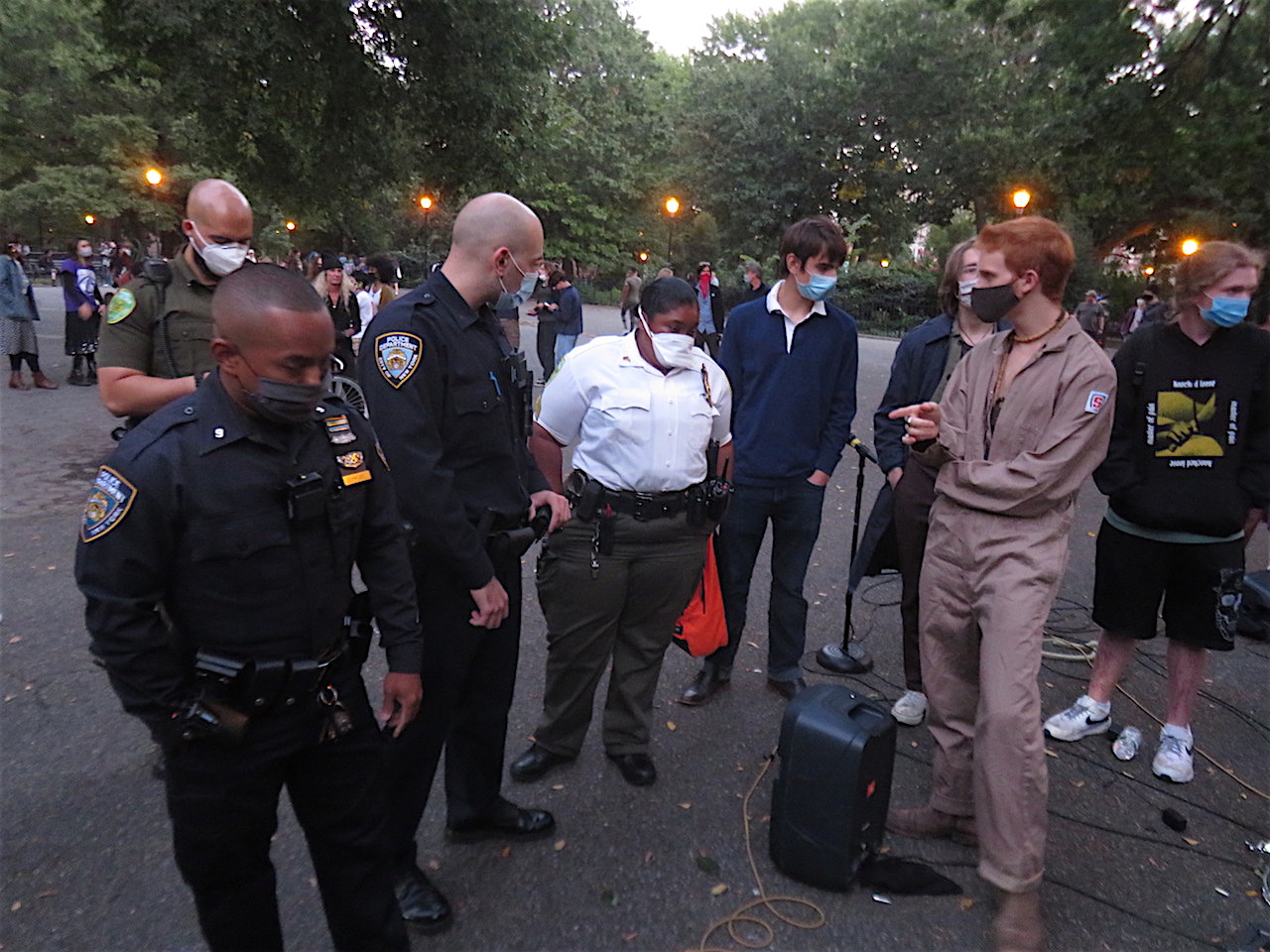 Parks Enforcement Patrol and police officers informed the Employees, who organized Friday's show at Tompkins Square Park, that they had to shut off their amplifiers and would need to file for a sound permit for a future event. (Photo by Everynight Charley Crespo)

BY EVERYNIGHT CHARLEY CRESPO | Three teenage rock bands hoped to perform in Tompkins Square Park Friday night, but were shut down by officers from the Parks Enforcement Patrol and Police Department.

Hello Mary, Clovis and the Employees drew more than 100 schoolmates, filling the circle by the Hare Krishna Tree, but none of the bands had secured an official permit to play with amplification. Parks Enforcement Patrol officers arrived about 5:20 p.m. and told the musicians they had to end the performances by 6 p.m. The three bands played brief sets and attempted to play past 6 p.m. but ultimately the officers moved in and ended the party.

This is the second time in a week that PEP officers visited Tompkins Square Park. The PEPs first shut down bands in the park last Friday. They have been shutting down amplified music in Washington Square Park, as well, for about three weeks.

Unamplified musicians are allowed to play without a permit.

“Ah, to be young and permit-free,” he reminisced. “By which I mean…even the concept of permits. These most excellent whippersnappers just set up and started playing — loud as balls — a rockin’ Mötorhead-esque triple bill. Eventually, the Parks Department via the Ninth Precinct pulled the plug on the whole affair and patiently explained how this whole game is played.”

“I’ve offered to put them in touch with Tompkins Square permit maestro Chris Flash / The Shadow… To be continued.”

Flash, publisher of The Shadow anarchist community newspaper, has been running permitted shows in the park for years, including the annual Tompkins Square Park Riots Anniversary Concert.

Amplification has become a heated issue lately. Last Saturday night, police seized deejay equipment in Washington Square Park after their orders to turn it off allegedly went unheeded. In response, about 150 protesters then marched down to W. 10th St. and reportedly tried to enter the Sixth Precinct, then blocked traffic on Hudson St., according to cops. After a standoff, police bull rushed the demonstrators and took 12 into custody, arresting four.

After Saturday’s aggressive arrests in front of Cowgirl Hall of Fame restaurant near the Sixth Precinct, Police Commissioner Dermot Shea said the situation with unpermitted amplified music had been brewing over the previous three weeks.

— With reporting by Chris Ryan