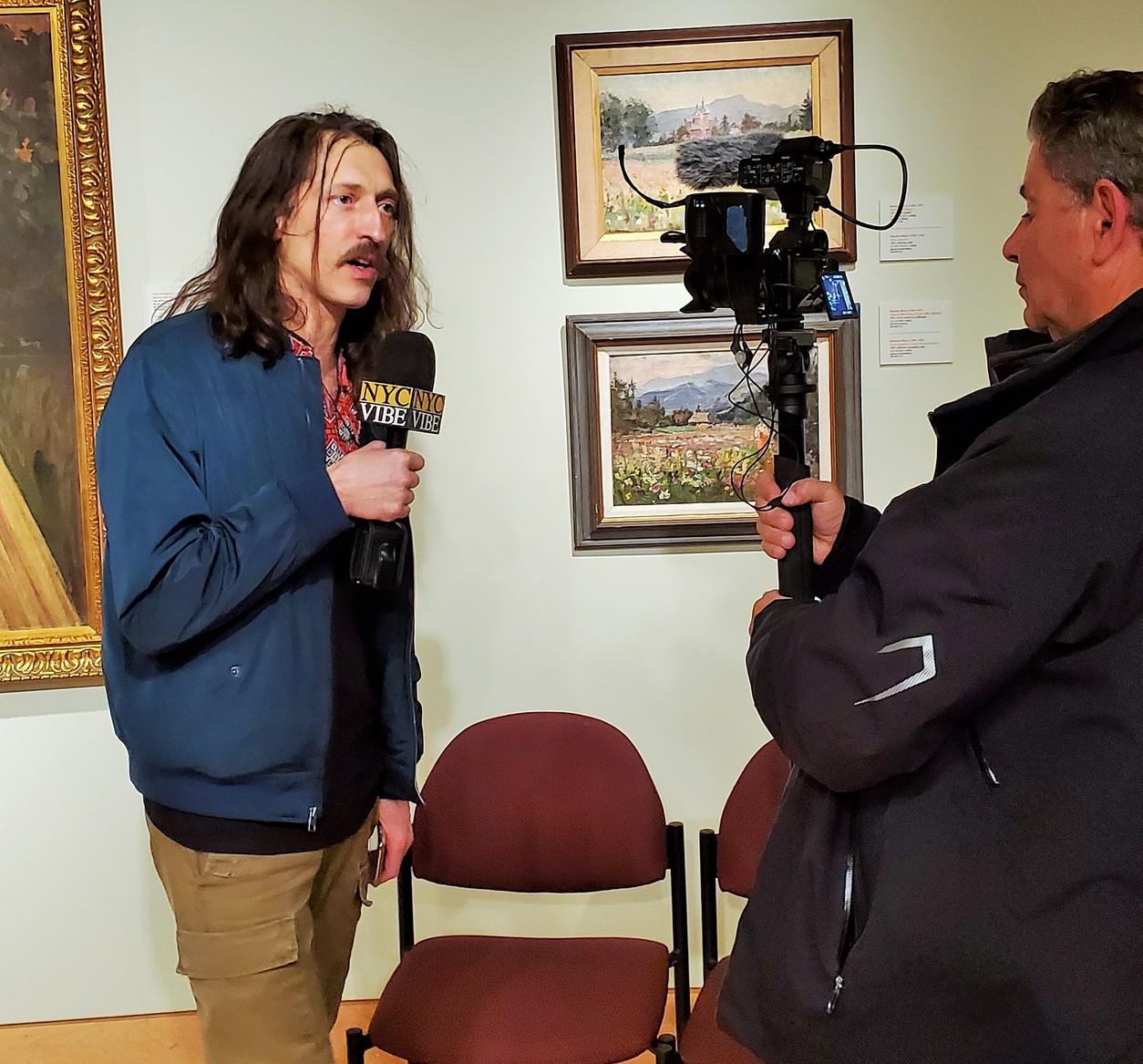 Eugene Hutz, the frontman of Gogol Bordello, does an interview after the show. (Photo by The Village Sun)

Poets, Gypsy-punk rocker pour out their passion for Ukraine

Although 300 reportedly had wanted to attend, the venue at the Ukrainian Museum, on E. Sixth Street, could only hold about 50 people. Another 15 watched the performances on a TV screen in the lobby.

Eugene Hutz, the frontman of Gogol Bordello, belted out several high-energy songs, in both Ukrainian and English. As his long hair flew about, he furiously strummed his guitar, holding it with the neck pointed nearly straight up, sometimes hugging and pounding it like a drum with both hands.

The Ukrainian-born Hutz, whose band got its start on the Lower East Side, has both Ukrainian and Roma ancestry.

After the performance, The Village Sun asked him about the fierce fighting wracking his homeland — and how the outmanned Ukrainians have been more than holding their own against the invading Russians.

“Of course, because they have cause,” he declared. “And these zombies, they don’t have a cause,” he said of the Russians.

Video of Eugene Hutz performing music followed by Bob Holman leading everyone in saying the Ukrainian national anthem in English, then some singing it in Ukrainian. (Video by The Village Sun)

During his performance, Hutz noted that Russia’s aggression didn’t come out of the blue, but for years had been “cooking,” keeping Eastern Europe on edge.

“All the neighbors around are tiptoeing around this bitch,” he spat of Putin, “walking on eggshells.”

In the overflow area in the lobby, Lena Howansky, a friend of Hutz’s and a hardcore punk fan, decorated a white, long-sleeved shirt for him. With a black marker, she drew a large “X,” then filled in the spaces with “K”,” Y,” “I” and “V.”

Hutz donned the shirt after the show.

There was also poetry by members of the Yara Arts Group, a resident company at La Mama. Yara’s leader, Virlana Tkacz, is of Ukrainian descent and grew up in the East Village. Her mother was a founder of the neighborhood’s Ukrainian youth scouts organization.

Another of the poets, Bob Holman, of Bowery Poetry Club fame, also has Ukrainian roots. His grandparents on his mother’s side emigrated from Ukraine in the early 1900s, settling in Kentucky.

Providing traditional music, Julian Kytasty sang and played the bandura, a combination of a zither and a lute.

Susan Hwang sang “Mushrooms of Donbas,” with lyrics by the leading Ukrainian poet Serhiy Zhadan, while playing accordion and accompanied on a small conga-like drum by Marlon Cherry.

Some of the Ukrainian singers ended their performances with shouted rallying cries in Ukrainian.

The evening ended with Holman leading the performers in reading aloud the English translation of the Ukrainian national anthem, after which those who could sing it in Ukrainian did, and beautifully so.

The poets’ “after-party” was at Veselka, of course, where they enjoyed borscht, pieorgi, beers and banter.