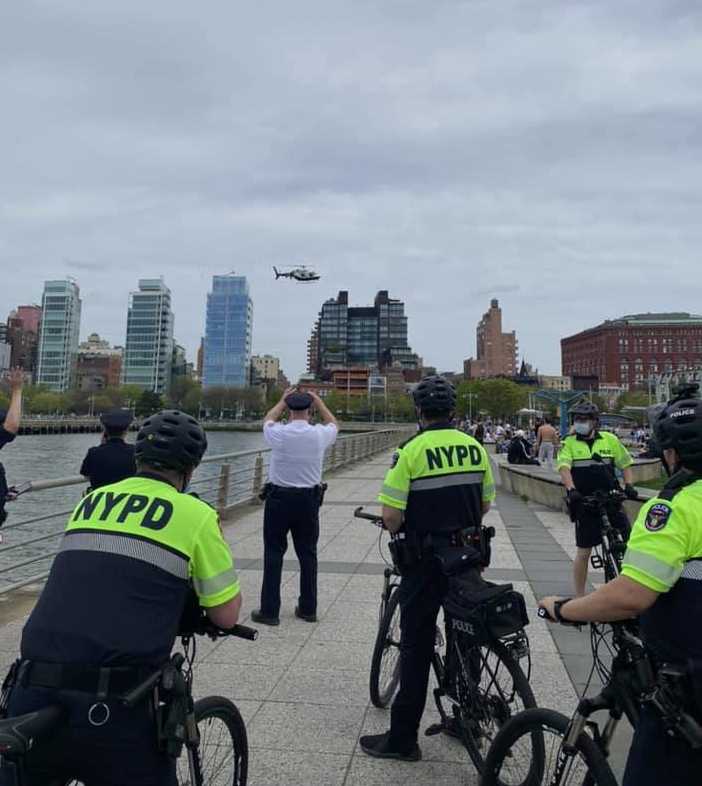 Updated May 4, 6:30 p.m.: Police cracked down on crowding in Hudson River Park over the weekend — and even called in the “air force” to check out conditions on the Christoper St. Pier.

On Sunday, a police helicopter swooped in low over the pier, officially known as Pier 45, which sports an inviting real grass lawn.

As the weather has warmed up amid the ongoing coronavirus pandemic, people are streaming to the waterfront park for fresh air and an escape from the mind-numbing confinement of their apartments.

Yet, there have been complaints about overcrowding in the popular park — and at one point, a swarm of parkgoers were told they all had to clear off of the Christopher Pier’s lawn.

Sara Kimbell, a vice president of the Village Independent Democrats political club, took photos of the weekend scene. She was perplexed that officers would actually want to reduce the amount of open space when it is in such great demand right now for social distancing.

“I asked someone why the grass was roped off and they mentioned they were told something about ‘weeding,'” Kimbell said. “When I was there two hours earlier, the whole lawn was open. Why would they want to limit space — especially when an overwhelming majority of people were not wearing masks? Is there an N.Y.P.D. protocol for groups in parks? It seems like it’s up to the ‘judgement’ of the local officers.”

However, a spokesperson for the Hudson River Park Trust, the state-city authority that runs the park, said people were moved off the lawn due to a maintenance issue — the pier’s grass is actually currently being seeded, not weeded. That said, he added that physically distancing within the park remains vitally important.

“We cannot stress strongly enough that all parkgoers should practice social distancing and wear face coverings, and we’ve posted signs throughout Hudson River Park making this clear,” the spokesperson said. “Our Park Enforcement Patrol is working hard to educate park users to wear a mask and stay 6 feet apart and working closely with N.Y.P.D. to support this effort — but we hope all park visitors can also take some personal responsibility right now out of respect for their fellow New Yorkers.

“While a portion of Pier 45 is cordoned off for annual reseeding until later this week, we hope everyone along Hudson River Park will adhere to social-distancing and face-covering protocols during this crisis. We all believe it is important to keep our 4-mile-long park open to provide people with open space to help meet their physical and mental needs during this hard time.”

Similarly, Central Park’s Great Lawn — which obviously would be a great outdoor spot for social distancing — was also recently observed fenced off from use, perhaps also for seasonal reseeding.

Meanwhile, police said the chopper’s visit to Hudson River Park was just part of the overall effort to keep an eye on overcrowding in public spaces.

“The N.Y.P.D.’s Aviation Unit is conducting directed patrols across the city at parks and other locations where crowds may gather to ensure social-distancing practices are adhered to,” a police spokesperson told The Village Sun. “The unit also conducts directed patrols to deter crime.”

The sea of humanity seeking escape in Hudson River Park from their cramped quarantine quarters has included at least one celebrity recently spotted on the Christopher St. Pier.