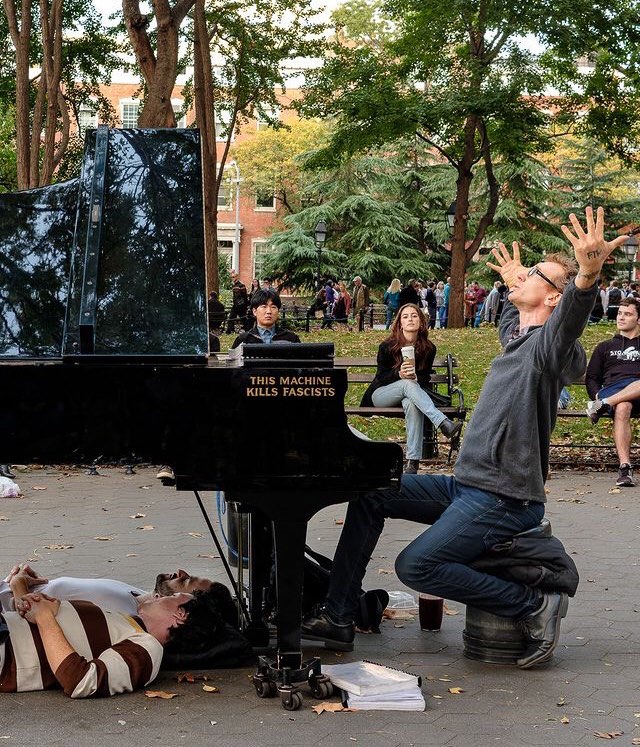 Colin Huggins performing in Washington Square Park just before the start of the pandemic. (Facebook)

BY LINCOLN ANDERSON | Colin Huggins is known and beloved as “That Crazy Piano Guy” of Washington Square Park. For most of the past 15 years, he’s been caressing and crescendoing the keys of a Steinway grand model B in Greenwich Village’s famed green agora to the delight of crowds.

Along the way, he’s developed some unorthodox, crowd-pleasing touches — like letting people lie underneath the piano while he plays, taking the idea of “feeling the music” to a whole new level.

During the pandemic, Huggins became homeless. He currently has a place to stay, though.

More, recently, his piano has become homeless, too. Given the effort it requires to wheel the 7-foot-long, 700-pound instrument into and out of the park, Huggins has relied on being able to store it nearby. Now he needs a new place for it — and quick — and he’s hoping some property owner around the park will help out.

He had a good setup with Judson Memorial Church, on Washington Square South, where he kept the grand piano for a year and a half until early this year.

After leaving Judson, he landed a spot at Ideal Glass Studios, at 9 W. Eighth St., for a while, until that, too, fell through. Huggins now found himself and his piano on the street — exposed to the rain and also theft.

In an unauthorized and desperate act, he tried to store the massive, percussive string instrument in the Jefferson Market Library right before the place recently reopened from a lengthy renovation. A newly added handicap-accessible ramp allowed him to roll the piano in through a rear entrance that construction workers had left open.

But the ad hoc piano squat didn’t last long. He was escorted out by Sixth Precinct police. Frank Collerius, the manager of the Greenwich Village library branch, insisted to police that he did not want Huggins arrested and did not want to press charges.

More recently, Huggins had been keeping the Steinway in a storage unit in Soho, but he said the spot was too far away to make the trek to the park with the piano on a regular basis.

“It’s too far to push more than once a week,” he stated.

Then on Wed., Aug. 10, Huggins reported to The Village Sun that he had lost that space, too — and that his beloved grand piano was once again back out on the street.

So he is, once more, desperate to find somewhere to store his music maker.

Some Village Sun readers were concerned about Huggins after seeing him and his piano on the street last month, and alerted the newspaper. The Village Sun reached out to him on Facebook and Huggins agreed to meet in Washington Square Park.

“I’ve been very reluctant to talk about it,” Huggins said as he spoke to this reporter on a park bench east of the arch on a quiet path near Washington Square North.

“It” basically refers to the combination of increased personal awareness and personal growth, yet also challenges, that he has been going through the past couple of years.

While the park was a wild and ebullient scene last summer — with late-night rave parties, amplified music, boxing matches, fireworks and motorcycles popping wheelies — Huggins was still performing. However, he said, he would come out to the park first thing in the morning “before all the cacophony began.”

“The park became this weird cacophony,” he recalled. “It was this muddled… . No one was connecting to anyone anymore.”

Although he had not been playing in the park more recently, Huggins said, “I’m going to be coming more again soon.”

Forty-four years old and a “ginger,” as he described himself, he wore olive-colored, thick cotton-twill pants, a white V-neck T-shirt and white-paint-splattered, brown slip-on shoes. He has tattoos on his right fingers and on his left hand and wrist. His voice was soft and calm.

Originally from Georgia, he said he came to New York City to be a classical pianist, mainly as an accompanist for ballet, such as the American Ballet Theater and Joffrey Ballet. He eventually found a calling, though, performing in Washington Square Park.

Then the pandemic hit and things began to change. As it did for many others, the lockdown had a life-changing effect on him. Basically, he said, in March 2020, when he still had his own apartment and New Yorkers went into quarantine, he started doing a lot of heavy thinking about himself and what he was trying to accomplish — his mission in life, as it were.

Realizing he had been working himself to “exhaustion” playing in the park — pulling 15-hour days — he decided he needed a break. However, this eventually led to his becoming homeless about 10 months ago. He declined to say how much he typically makes when performing.

“When I found out the moratorium on evictions was going to be lifted, I just agreed to leave my apartment,” he said. “I was able to pay rent for the first year of the pandemic. But after the second year, I just couldn’t do it anymore.”

Currently, he’s staying with a professor friend up at Columbia University.

The conversation turned to what happened that led him to lose the spaces for his piano. Basically, like many other creative types, he has his own preferences for how he likes to do things. Singer Chris Robinson of the Black Crowes, for example, performs barefoot on stage. The Beach Boys’ Brian Wilson composed the album “Pet Sounds” on a piano in a sandbox. Kyrie Irving, who creates with a basketball in his hands, has burned sage to purify courts before games.

In Huggins’s case it’s about cleaning the floor where he parks his piano. He dislikes what he called the “harsh chemicals” like bleach that are often used on floors, and the “dust” from uncovered concrete, so instead he puts down substances like baking soda, vinegar, palm oil, vaseline or arrowroot, the latter which he described as “like baby powder.” However, the properties’ owners have not exactly been floored by Huggins’s floor treatments.

When he got kicked out of the Ideal Glass Studios space, it was a low point for him. Without anywhere to store it, his piano was stuck out on the street for three days. People stole its pedals, his iPhone and iPad, a music stand. And then, on top of everything, it started raining.

“I walked over to the library and the door was open,” he said. “So I brought [the piano] over and pushed it in. And just to be nice to them, I used some paper towels — and [put down] a little arrowroot, to make it a little more pleasant for me.”

But the next day police arrived, and he was forced to wheel the piano back out of the landmark courthouse-turned-library.

Library manager Collerius told The Village Sun that he actually had been in talks with Huggins and was interested in having the pianist do some performances in the library’s lobby area to enliven the new space. However, he said, Huggins wanted to store the piano in an upstairs room and have 24-hour access to it, although it’s a shared space also used by four of five other groups. The librarian told the musician it wasn’t going to work out, and thought that was the end of the discussion. As a result then, Collerius was subsequently surprised to walk into the library and find the grand piano sitting in the lobby.

In addition, he said, “There was baby powder on the floor of the Children’s Room…and on the piano.”

Reverend Micah Bucey, a minister at Judson Memorial Church, said, in a statement to The Village Sun, that the renowned house of worship tried to accommodate the piano man.

“All of us at Judson respect and appreciate Colin’s special art,” he said. “That’s why we provided space for him and his two pianos, one of which is still being stored at Judson, for well over a year.

“We tried several configurations to try to accommodate Colin’s unique needs while also protecting the space and other space users, but after a series of attempts, we were unable to meet both.

“We certainly wish Colin well with all he does.”

Again, Huggins feels that through his music and also through his own empathic positivity, that he is improving the park. He even feels that he can help the troubled drug addicts who hang out in its northwest corner. He’ll sometimes go into that part of the park and just meditate, focusing his thoughts on helping the people there.

“There was one day where there were only 10 of them there,” he said. “Usually there are 150. I was working on it day by day and seeing the numbers improve. It might make them a little more open to connecting with one of these [outreach] programs that come to the park to help them,” he added.

Fern Penn, a Greenwich Village native who was sitting on a nearby bench, cheerily greeted Huggins as he and a reporter were getting up and heading over to visit the park’s northwest corner. She agreed that the pianist’s impact on the park is tangible and wonderful.

“He needs a good story,” Penn urged The Village Sun, adding of the absence of Huggins’s music lately, “Missing it!”

“He adds joy to the park when he’s here, and makes New York City a better place to live,” she enthused. “It’s just stupendous. It really brings joy to the community.”

After arriving in the notorious park corner, Huggins calmly took in the scene.

“All these people in here all suffered child abuse,” he said. He noted he’s had conversations with some of the individuals, “the few that were willing to open up to me.”

He revealed that he, too, was “born into pain,” having had clubfeet during his first year of life.

As he stood near the park’s northwest entranceway, Huggins gazed around at the nearby buildings ringing the square.

“I need someone around here to take and keep the piano as part of the community,” he said. “I need one of these building owners to understand I’m an important part of the community — that having Colin here makes this a better place and more conducive to positive human connection. But to do that properly, I need to feel like people want me here. I need someone to understand that having me here makes this a much better place.”

As much as Huggins feels that he’s giving to the community through his playing, he confesses that he gets a lot back in return, too.

“As much as I hate to admit it, a major reason why piano has always been so appealing to me is that it’s one of the few things that got people to like me,” he reflected. “When I stopped performing, I was reminded how difficult it is for me to be loved and cared for just as me.”

As he posed for some photos, Huggins was asked about his tattoos. He said the ones on the fingers of his right hand are trees. On his left wrist is seaweed.

As for the “FTW” on the back of his left hand, he said that when he originally got it inked, “It could have been ‘F— the World.’

“But today it means…” he said, and gently paused to think for a moment…“‘Find the Way.’”