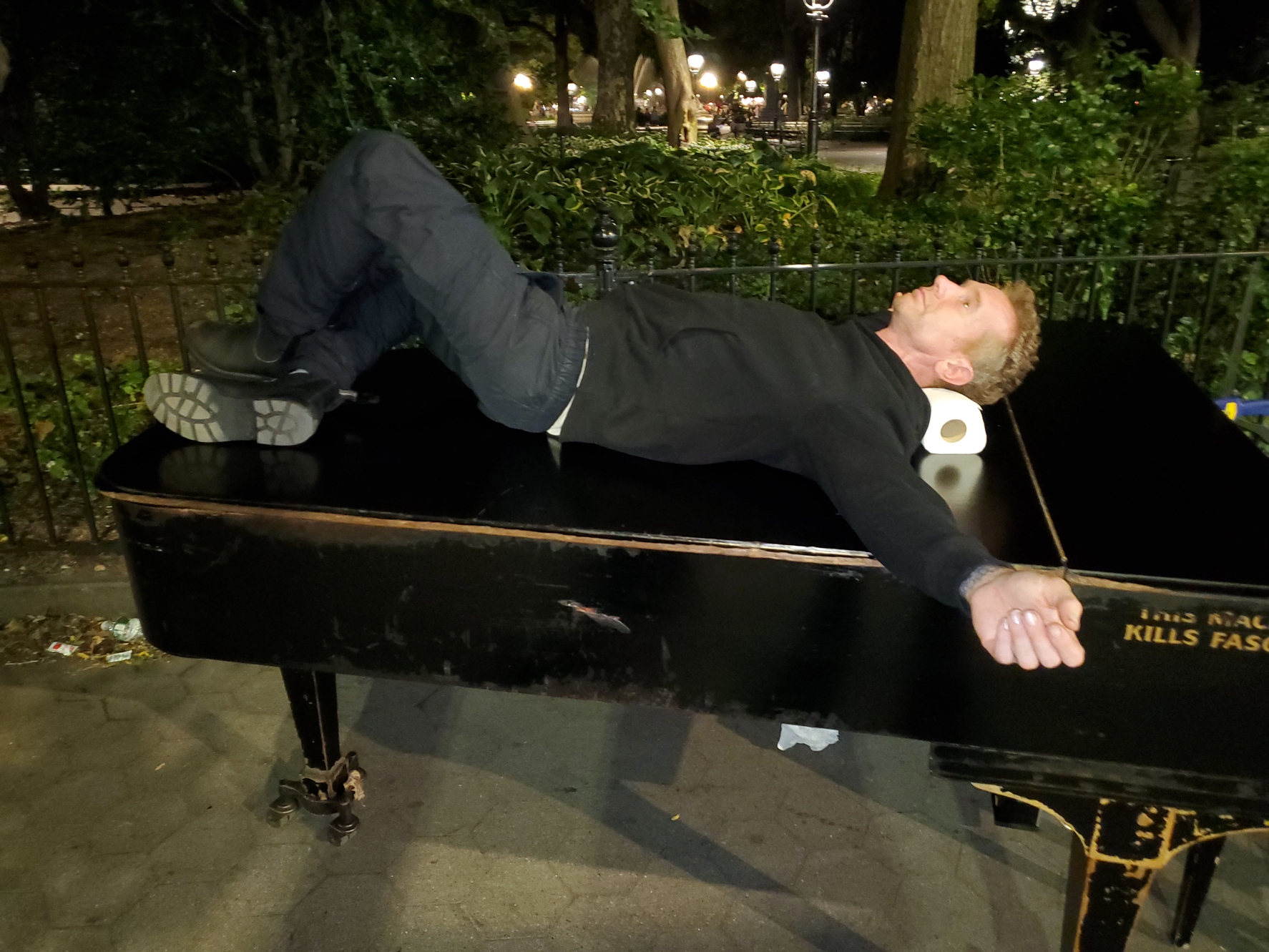 Collin Huggins about to go to sleep atop his grand piano just outside Washington Square Park. (Photo by The Village Sun)

BY LINCOLN ANDERSON | Colin Huggins hasn’t found a place yet — either for himself or his piano.

That’s why you could find both of them late one night last week right right outside Washington Square Park at Washington Place.

Huggins was getting ready for bedtime.

The park was being closed for its regular midnight curfew. Huggins stood next to the grand piano, meditating, eyes closed, hands held just in front of him at waist level, palms upward, as if cupping the air.

Easing out of his meditation, he then proceeded to wax down the instrument’s top with vaseline, which, he explained, waterproofs it.

On the side of the instrument, goldleaf lettering proclaimed, “THIS MACHINE KILLS FASCISTS” — in homage to folk legend Woody Guthrie, who famously sported the slogan on his guitar.

Huggins now sleeps on top of the 700-pound Steinway in the open air just outside the park’s fence.

“I’m homeless and I don’t have a place for the piano,” he told The Village Sun. “I put 2 and 2 together…and ba-da-boom.”

A month ago, The Village Sun first reported how Huggins a.k.a. “That Crazy Piano Guy” had lost a series of storage spots near the park for his piano. He hasn’t been able to find anyplace since — so he now sleeps outside the park — or, at least, tries to.

Since The Village Sun article, he’s been busking constantly in Washington Square.

“For about a month now, I’ve been playing in the park from sunlight to sundown,” he said, “and I sleep here from sundown to sunlight.”

His nightly rest, however, is more like napping — closing his eyes for 30 minutes until the next passerby wakes him up yet again. As he joked, “REM sleep and I are no longer friends.”

As for who wakes him up, he said it’s “N.Y.U. students — or someone will hit the piano and say, ‘Hey, how did you get that here?'”

A clamp holding the keyboard shut offers a little deterrence, in case anyone is inspired to think they are John Legend, Chris Martin or Alicia Keys at 3 a.m.

Huggins said he felt The Village Sun’s initial article about him was fair, and that it helped get the message out about him, his situation and what he is trying to do.

Part of what he is trying to do when he performs is to spread positive and healing energy around him throughout the park. That includes focusing on the park’s troubled northwest corner, where drug dealers and crack and heroin addicts often congregate. He feels the energy vibes he sends out have been working.

“There were 130 — now there are 20 or 30,” he said, referring to that corner’s denizens. “What I do is, I calm them down — so the cops and organizations can work with them better when they interact with them.”

Of course, it probably doesn’t hurt that there have been six police officers regularly posted in the park for the past two months, conveniently coinciding with the return of New York University students for the fall semester. One officer, though, recently told this newspaper that police were being posted there because “a lot of crime was coming out of the park.”

Huggins said he can tell that the individuals in that corner of the park suffered from childhood abuse. He said he’s “focusing on anxiety” when he sends out his healing energy, since that’s what many of those folks — and almost all of us, in fact — are experiencing far too much of in our lives.

Huggins said another reason he favors waxing down his piano with vaseline is because it doesn’t kill the microorganisms on top of it, as harsher substances might do. The instrument’s wood supports microbiomes, he explained. Even though the slogan on his piano refers to killing fascists, he doesn’t actually endorse killing anything or anyone, he said.

He asked this reporter to briefly put his hands on the piano top, and then he did the same. Then, crouching down and looking at the surface, he assesed the interaction. It was two males’ microbiomes, so there wasn’t the yin yang, dualistic relationship of male and female, he noted. Instead, the microbiomes were a bit on guard, checking each other out, their defenses slightly up. But it was O.K., he determined — on a microbiome level, the musician and the reporter were “bros.”

Now it was time for Huggins to start getting some shuteye and restoring his energy for the next day’s performances. He clambered atop the piano, lay down on his back in a semi-spread eagle position — actually, looking a bit like a crucifixion. (Coincidentally, he was previously kicked out of a church space where he had stored his piano.) He stuck a roll of paper towels under his head for a pillow. He closed his eyes.