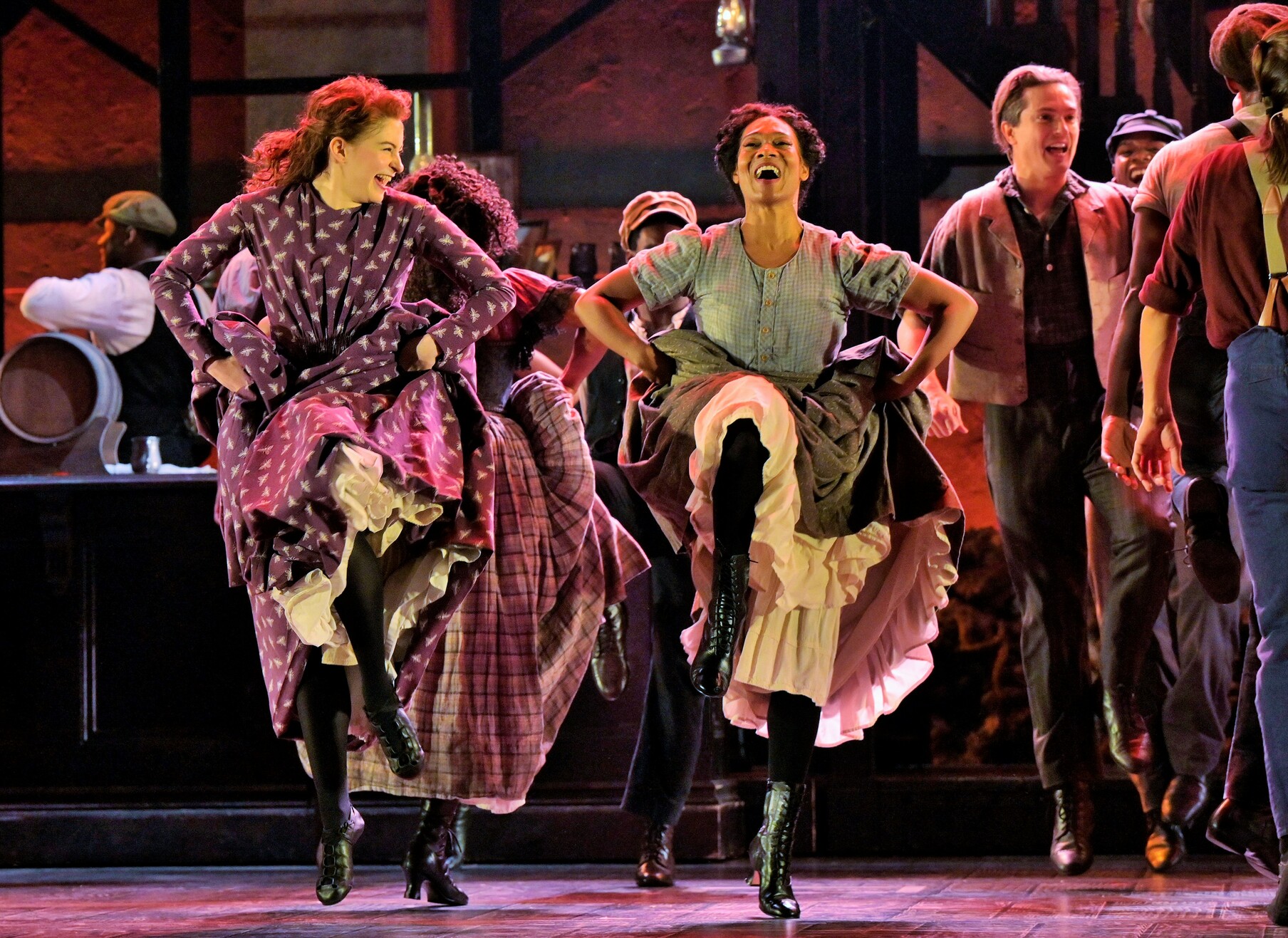 Eilis Quinn, left, and Chloe Davis in a scene from "Paradise Square." (Photo by Kevin Berne)

The show is facing two lawsuits alleging the production failed to pay nearly $350,000 in wages, pension and health benefits to two unions.

The big-budget musical with a 40-person cast in recent weeks was struggling to fill the Barrymore Theater, despite a short lift in sales after it was nominated for 10 Tony Awards and Joaquin Kalukango won for best actress in a musical. She also wowed the crowd during the live broadcast of the Tony Awards on CBS, during which she belted out the show’s top song, “Let It Burn,” to a standing ovation.

Kalukango portrays Nelly O’Brien, the black saloonkeeper who keeps the Paradise Square saloon going as a vibrant refugee after her husband, a Union Army officer, is killed in battle. The short-lived utopia where famine-era Irish immigrants lived, worked and loved side by side with freed blacks and runaway slaves is shattered by the Draft Riots that convulsed New York in 1863 — but Nelly protects her tavern in a standoff with the rioters.

The actors and designers could have used some of Nelly’s moxy in their real-life struggles with the play’s financial backers.

And the two lawsuits filed thus far may only be just the beginning of legal problems for the show, according to The Hollywood Reporter, which broke the news of two pending lawsuits last week, shortly before the show revealed it would close.

United Scenic Artists USA Local 829, which represents some of the designers, sued two weeks ago, claiming it is owed just shy of $157,000 for unpaid wages and retirement benefits.

Actors Equity sued in New York State Supreme Court in May, only a month after the show’s Broadway debut, and the production agreed to pay $413,000 to settle unpaid health and pension benefits.

But in a second lawsuit filed two weeks ago, the union said the show defaulted and still owed about $190,000.

The Hollywood Reporter said that in the week ending July 10, the show pulled in audiences of only 48 percent of capacity.

The show was seen as the first big bid by producer Garth Drabinsky to stage a comeback in the live entertainment world following his release after a 17-month prison stint in Canada on fraud and forgery charges from when he was running the publicly traded live entertainment company Livent.

The two lawsuits are apparently only the latest in a series of running battles between the union and the show’s producers.

The Actors Equity union said that it reached a settlement in late May for the show to pay $412,807 in unpaid retirement and health benefits and did pay $224,900 before defaulting, according to the lawsuit filed by Actors Equity in New York State Supreme Court.

“Equity is purshing every avenue available to ensure the actors and stage managers of “Paradise Square” receive everything their contract guarantees them,” the union told The Hollywood Reporter.

More recently, Actors Equity said it planned to put Drabinsky on a “Do Not Work” list. The union said “Pardise Square” cast members did not receive direct-deposit paychecks that were scheduled to be deposited last Thursday and instead were told to receive paper checks at the theater that evening.

Although Drabinsky is the lead producer, the designers union is so far suing only the Paradise Square Broadway Limited Partnership and Bernard Abrams, president of the limited-liability partnership.

The designers union said that it was awarded $156,986 in an arbitration ruling in June, but never received any of the settlement.

According to the original arbitration ruling, if full payment — that has now grown to $190,000 — is not received by this Dec. 1 then the production rights owned by the producers will be transferred to four of the top designers who are behind the suit: Allen Moyer, the scenic designer; Toni-Lesle James, the costume designer; Donald Holder, the lighting designer; and Jon Weston, the sound designer.

Drabinsky in an e-mail to staffers last week said, “The art of producing is filled with endless choices, the appropriate decision made for the greater good. Compromise is a tool that often must be part of the process. Every production decision made on “Paradise Square” was to protect the show and to achieve as long a run as possible for all of you to benefit.

“I fought the entire time for the company and the production I believed in,” he continued. “I was your champion in the arena, valiantly fighting the fight to garner the admiration of all those who love musical theater and for all those who care about the sacred institution of Broadway.”

But the Actors Equity latest e-mail on Thursday said that Drabinsky has been “the one person making all executive decisions.” Under conditions of Drabinsky’s prison parole, he was barred from being the main executive running any live entertianment businesses. The latest broadside from Actors Equity claimed that the company’s producers “have withheld benefits and pay from many company members and have created an unsafe, toxic and frequently hostile work environment. When presented with these concerns from the company, this person [Drabinsky] has continually been dismissive, defensive and often abusive.”

Irish rocker Larry Kirwan, the front man for the ban Black 47, who conceived the show more than a decade ago when it was known as “Hard Times” and who was one of the three co-writers when it finally made its short-lived run on the Great White Way, offered no insights on the financial woes that sunk his Broadway dream.

“I’m only involved in the creative and promo sides of “Paradise Square” and not the production or financial areas, so I’ve little to add to whatever controversies are swirling around the show at the moment,” he told The Village Sun.

“I will say that COVID has had a huge impact on “Paradise Square” and many other shows.”

He still has high praise for the cast and crew — and even the producers — who nursed it through productions in L.A. and Chicago before finally opening on Broadway in April.

“That a historical story says so much about the current state of America,” Kirwan said, “is a tribute to the cast, crew, creatives, producers and everyone who has given so much to the project over the years.”