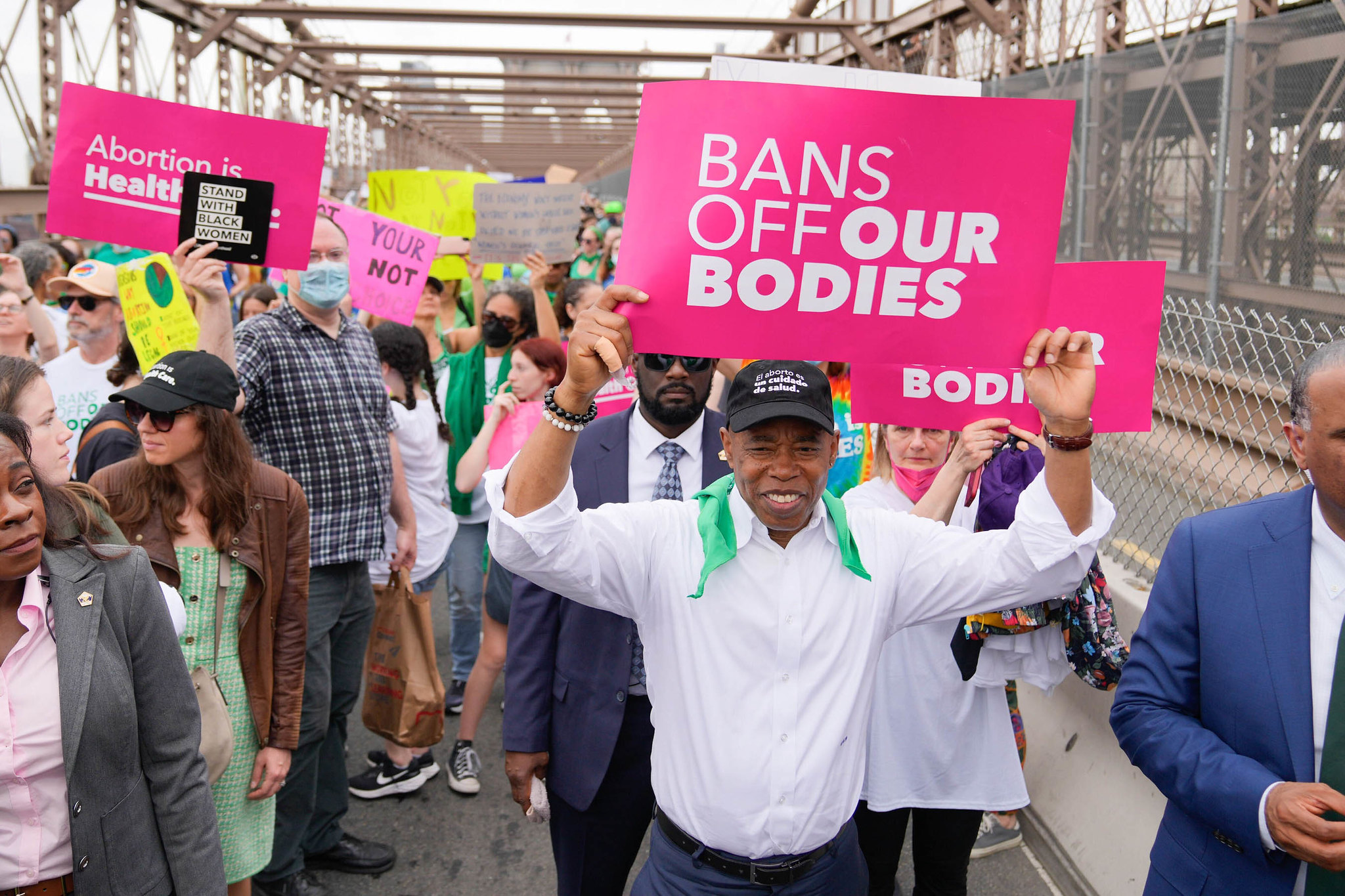 BY KAREN REMPEL | On Sat., May 14, more than 2,000 protesters gathered at Union Square to protect abortion rights in America. The powerful, recently formed activist group Rise Up 4 Abortion Rights organized the Union Square rally and also protests around the nation in 41 cities.

The other major event in New York City on Saturday was Planned Parenthood’s “Bans Off Our Bodies” march. Thousands marched from Brooklyn’s Cadman Plaza across the Brooklyn Bridge to Foley Square in Lower Manhattan.

Saturday’s protests were part of a unified movement, organized with rights groups, including Women’s March Foundation, MoveOn, UltraViolet, the Liberate Abortion Coalition and more than 100 allied organizations. Together they led marches and rallies in all 50 states and Washington, D.C.

From coast to coast, tens of thousands of abortion supporters came to more than 380 events to march, shout, carry signs and gather as a protective community in response to the leak on May 2 of the Supreme Court’s intention to strike down Roe v. Wade. The 1973 ruling said that the U.S. Constitution protects a pregnant woman’s liberty to choose to have an abortion without excessive government restriction. The 1973 decision struck down many U.S. federal and state anti-abortion laws.

In the leaked document, Supreme Court Associate Justice Samuel Alito said, “The word abortion is not in the Constitution.” The protesters’ answer: “Neither is the word woman.”

The Constitution was ratified on June 21, 1788, at a time when women were not considered autonomous human beings. As the English jurist William Blackstone famously put it in his “Commentaries on English Law” (1765–1769), “By marriage, the husband and wife are one person in the law: that is, the very being or legal existence of the woman is suspended during the marriage, or at least is incorporated and consolidated into that of the husband.”

If approved, the leaked ruling would mark the first time in history that the U.S. Supreme Court has taken away a fundamental right. For half a century, generations of women have grown up with legal access to abortion. However, 23 states are now poised to make abortion a crime if the ruling goes into effect. This drastic legal opinion goes against the wishes and beliefs of nearly 70 percent of the American population, according to one poll.

Views on abortion are not binary (either/or), but rather nuanced, depending on circumstances, the stage of pregnancy and other factors.

For example, nearly three-quarters of adults (73 percent) say abortion should be legal if the woman’s life or health is endangered by the pregnancy, and about 70 percent say abortion should be legal if the pregnancy is a result of rape. The Pew survey was conducted in early March. This was after the Supreme Court’s oral arguments on a case challenging the 1973 Roe v. Wade decision that established a federal right to abortion, but before the May 2 publication of the leaked Alito draft of the Supreme Court majority opinion that suggests the court is poised to strike down Roe.

The leak created a sense of urgency for women’s rights organizations, although they have seen this coming for several years. With the appointments to the Supreme Court of conservatives Neil Gorsuch in 2017 and Brett Kavanaugh in 2018, followed by Ruth Bader Ginsburg’s death in 2020 and the rapid appointment of another conservative, Amy Coney Barrett, scarcely a month later, the writing was on the wall that abortion rights were in jeopardy. Together with Samuel Alito and Clarence Thomas, these justices now form an anti-abortion majority.

Early this January, Merle Hoffman, Lori Sokol, Sunsara Taylor and other initiators of Rise Up 4 Abortion Rights came together as individual longtime activists out of their shared recognition that the Supreme Court was on track to decimate abortion rights. They issued a statement that read, in part, “We refuse to let the U.S. Supreme Court deny women’s humanity and decimate their rights! Join us in fighting for abortion on demand and without apology! The violent subjugation of half of society must not be accommodated, excused, downplayed or surrendered to. It must be stopped!”

Since then, the group Rise Up 4 Abortion Rights has organized events on key occasions in Washington, D.C., and New York. The 41-city protest on Saturday is its most ambitious accomplishment to date. At Union Square, an impressive array of speakers took the stage to inform, inspire and motivate the crowd to take action to keep abortion legal. The crowd shouted and cheered at emotional high points, and emcee Karina Aybar punctuated each speaker’s message by leading the crowd in chanting.

The organizers also provided green bandanas, downloadable signs and other emblems to create a unified identity and sense of purpose. The color green is used in solidarity with the women in Argentina, Chile, Mexico and Colombia who have waged fierce, determined, nonviolent struggle in the streets in the form of a “#Green4Abortion” wave to decriminalize abortion.

After opening speeches by Rise Up 4 Abortion Rights founders Hoffman, Sokol and others, Rosita Romero took the stage. The executive director of the Dominican Women’s Development Center, she fired up the crowd.

She explained the protest’s connection to the global abortion rights movement.

“We support abortion not only in the United States, but in Latin America and throughout the world,” Romero said. “We are on the green wave! To make it a right in all countries, so women can say, ‘My body, my choice!’”

According to Romero, the Dominican Republic is one of four Latin American countries where abortion is illegal, and her organization is fighting to legalize it there. She led a chant, “Keep your rosaries off our ovaries!” in English and Spanish.

Next to take the stage was Dr. Nori Rost, the resident acting leader of the New York Society for Ethical Culture. She said her organization has been a champion of justice for all for the past 145 years.

“We believe it is incumbent upon each of us to fight for the rights of all of us,” Rost said. “The anti-life, anti-choice, anti-women choir has long been seen as a center of oppression and fear. It’s a tired tune, and it’s not in tune with the reality of millions of people in this nation and around the globe. So now’s the time to lift our voices, to be loud and proud in our support for the people that have abortions and the medical professionals that ensure abortion access. Now is the time.”

The crowd responded, “Because we value life, abortion is a right!”

Jennifer Baumgardner, the prolific feminist writer, activist and initiator of the I Had an Abortion campaign, shared her story of having undergone the procedure.

“The energy of this crowd is so powerful,” she said. “I want to say a couple commonsense things about power. If I, as a woman, have the power to give life, I have the power to not give life. After my second child was born, I got pregnant again and I had an abortion. This was about 11 years ago. I’m grateful because it was safe, easy…a doctor’s appointment. If there was ever a time to own your abortion experience, regardless of gender, and to own your power, it’s now.”

Former Congressmember Liz Holtzman said, “The future is grim indeed if this group of people who are hostile, judges who are hostile to women and to women’s rights can control us. Where are we going to be in terms of any rights? Because if they interfere with the rights of more than half the population, nobody is safe.”

“Feel the energy of not just this crowd, but there are hundreds of thousands, if not millions of people all over this country saying ‘No!’ to the Supreme Court,” she declared. “We are powerful, and they better start shaking in their boots, because more than half this country is made up of women. And there are some men who love us, too, and care about what happens. We are here because we are angry, and because we are demanding that we be treated as full, legal human beings under the law.”

Sunsara Taylor is co-host of the “RNL Show: Revolution Nothing Less!” on YouTube and is a key initiator of Rise Up 4 Abortion Rights. She is a passionate young woman and she addressed the crowd forcefully.

“There are few things that are as beautiful as furious women and girls, and justice-loving people taking to the streets, standing up, standing shoulder to shoulder and fighting for a better future and a better world!” she shouted. “And there could not be a more important time to be in the streets, to be standing up, to be giving voice to your righteous rage, than right now.

“Because the Supreme Court, as we all know, is on track to overturn Roe v. Wade. To decimate women’s fundamental right to abortion. This would be an atrocity,” Taylor said. “This will be an atrocity. Forcing women to have children against their will is barbaric. It shatters lives. It forecloses dreams, it traps women in abuse. It forces women and girls to drop out of school, to lose their jobs, to lose their future. And it tells women and all girls, whether or not they ever become pregnant, that the state — a patriarchal state — views them as less than fully human.”

She shouted a Rise Up slogan, “Forced motherhood is female enslavement… This is why we say, and we must mean it and we must back it up with our bodies in the streets, and with our bodies refusing to become silent: Overturn Roe? Hell no! We need to stay in these streets!”

Amaris Modesto is vice president of digital health at the P.R. and communication services firm Edelman and an organizer for Rise Up 4 Abortion Rights. Her savvy influence was seen in emcee Karina Aybar’s prompts to take the audience to deeper levels of engagement. Early in the protest, Aybar said, “Pull out your phones and take a picture. Post it on Instagram right now to #rise4abortionrights.”

Later, the Rise Up speakers encouraged instant cash donations, and described next steps to take action at a walk-out on Thurs., May 19. These women are smart and using every means at their disposal in this crucial fight against the repressive forces on the Supreme Court and the people behind them who are making puppets of the Supreme Court.

Hundreds of students walked out of class to protest in Washington Square Park on Thurs., May 12, just as dozens had done the previous Thursday. Rise Up 4 Abortion Rights organized these walkouts, and it’s staging a massive national walkout on Thurs., May 19 at 1 p.m. and another on Thurs., May 26, at noon. These activists want to shut the country down on these afternoons, to make felt the impact of people’s refusal to participate in an unjust society.

For details on the upcoming walkouts, visit riseup4abortionrights.org.