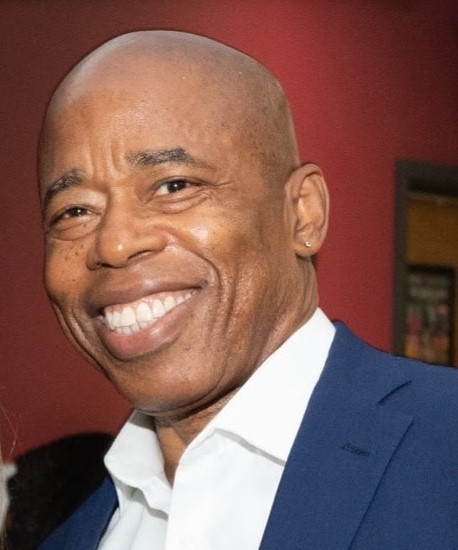 Eric Adams at City Winery at Pier 57 in Hudson River Park on Oct. 13, when he joined Google and Tech:NYC to recognize New York’s 2020 and 2021 Google for Startups Black Founders Fund grant recipients. (Photo by Don Pollard)

Opinion: Welcome, Mayor Adams! Why he’ll be a new kind of leader for our city

BY ARTHUR SCHWARTZ | We have a new mayor (or at least a mayor-elect) by the time you read this.

His name, if you missed it, is Eric Adams.

Over the last few weeks, as the media resumes paying attention to local politics, writers have been trying to figure out who exactly Eric Adams is. The New York Post’s characterization of him as a “law and order centrist” has worn thin, because that’s not who he is.

I spoke at an Adams fundraiser early in October, and giving remarks before him, I said, “You cannot put Eric Adams in a niche. He is a complex person, who, as he says, has ‘walked the walk.'” He led the applause — before calling me his “brother from another mother.”

At a forum last week I heard him describe himself as “perfectly imperfect.”

One thing Eric Adams isn’t — he isn’t Bill de Blasio. Many, including me, thought that Bill de Blasio would be a great bastion of progressive change in New York City after 12 years of Emperor Bloomberg, and his predecessor, Rudy — can you believe he was our mayor for eight years!

But de Blasio didn’t shake out so great, and may leave as the most unpopular mayor ever. He wasn’t real. He hadn’t battled to survive in his life, and eventually identified with the city’s elite. Eric Adams has battled to get where he is.

Yes, Eric Adams was a cop. He even spent some years in Greenwich Village’s Sixth Precinct! But he was a cop who signed up as part of an effort spearheaded by Reverend Herbert Daughtry to combat racism from within the New York Police Department. He started a civil rights group while in the N.Y.P.D. He did not abide by the “blue wall of silence.”

When a woman named Eleanor Bumpers was brutally shot in the Bronx by a cop with a 12-gauge shotgun, Eric Adams, then a sergeant, spoke out. When Abner Louima was sodomized in a precinct cell, Adams denounced it — he was a captain by then. He speaks about how when he would enter a room full of officers, everyone would move to the other side. Once, his car was shot at, and he was sure it was by a cop.

Eric Adams is the son of two poor immigrants, raised mostly by his mom, who cleaned houses to survive. He talks about how he brought a bag of clothes to school each day just in case his family was evicted. His mom saved enough to buy a house in Queens, but Eric was a horrible student. He graduated Bayside High School with a D average.

His mom got him to go to community college at night; there he learned that he was dyslexic. He sought help, got it, and went on to graduate from John Jay College with an A average, and went on to earn a master’s degree in government administration.

At age 14, Adams joined a gang called the 7-Crowns. He would run errands and hold money for local hustlers. Once he stole a TV from one of his “employers” because he hadn’t been paid. He got arrested, was brought down to the basement of the precinct, and was kicked so hard he pissed blood for weeks. He spent some time in the Spofford Juvenile Center before being sentenced to probation. But he suffered from PTSD for years. His response was to join the N.Y.P.D.

In an interview in the Wall Street Journal published this Sept. 4, Adams was quoted as saying this about the police: “On day one, I’ll go from borough to borough and have focus groups with my police officers and say, ‘It’s time to hit the reset button. We need each other, the community, and the police, and we want to rebuild trust. Trust means racial sensitivity. There’s a lot of deep wounds and scars and we really need to confront this.” He vowed to “rid the department of those who tarnish the shield and the nobility of public protection.”

At the fundraiser I spoke at last month, Adams talked about crime. He pointed out that 35 percent of the prisoners at Rikers Island have mental health disorders, and that 25 percent had learning disabilities. His answer, he said, wasn’t more arrests and more people in jail.

“We need to address the problem of crime at its roots,” he stressed. “Just throwing people in jail won’t do that.”

Will he work hard? When the worst days of COVID were here, just 18 months ago, Eric Adams, then Brooklyn borough president, set up a cot in Borough Hall and directed operations from his office 24 hours a day, 7 days a week. He lived the crisis along with the essential workforce. The same thing happened on 9/11, 19 years earlier. Eric said he ran right down to the collapsed Twin Towers from the Sixth Precinct and was in charge of the officers at the scene.

Eric was an early proponent of marriage equality, voting for it three times as a state senator until it became law.

He was a vocal opponent of the N.Y.P.D.’s “stop and frisk” policy, and doesn’t dispute that it was applied in an unconstitutional manner. He was a strong critic of the lack of prosecution in the N.Y.P.D. killing of Eric Garner.

As borough president he fought hard to build genuinely affordable housing. He supports making community colleges free, and he recently announced that he would restore the Gifted and Talented program that de Blasio irresponsibly cut on his way out the door. Adams also supports requiring COVID vaccinations for all school children now that the Food and Drug Administration has approved the vaccines for children.

And then there is his life as a vegan. He chose to deal with a serious diagnosis of Type 2 diabetes in 2016 — he was losing his vision — by adopting a plant-based diet. He has fought to ban processed meat from city schools. If “you are what you eat,” Eric will be a force.

And Eric considers himself a member of the disabled community. At a recent forum held by the 504 Democratic Club, the city’s leading political organization for people with disabilities, he displayed a profound grasp of the problems of the disabled, promising to focus a lot more money and attention on special education and the hiring workers needing reasonable accommodations.

Sounds like a quite different kind of mayor doesn’t he? I am excited about the next four years.

Schwartz is the male Democratic district leader for Greenwich Village, the political director of the New York Progressive Action Network and law chairperson for the Manhattan Democratic Party.