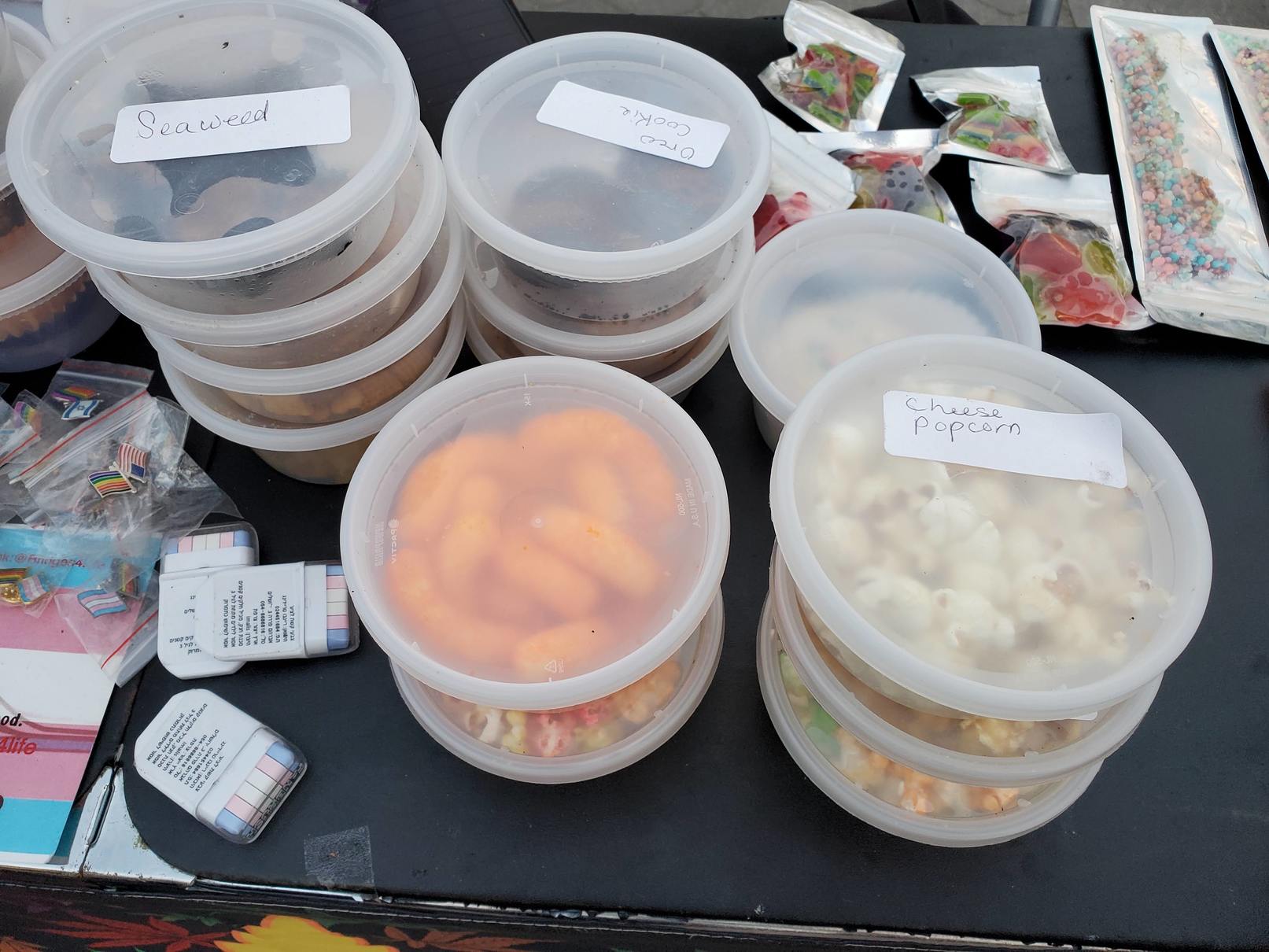 An array of marijuana-infused "edibles" recently for sale in Washington Square Park. (Photo by The Village Sun)

One day later in a subsequent Village Sun article (“Up in smoke: Parks Dept., police crack down on Washington Square pot bazaar,” Oct. 14 ), Parks and the New York Police Department announced a crackdown, claiming that no vending is allowed in the park.

You might think The Village Sun got the story wrong. The reality is that the Parks Department has told so many lies about the park rules that not even the Park Enforcement Patrol (PEP) officers know what’s legal and what isn’t.

I spent 20 years in court suing the Parks Department over its rules as applied to artists. What I found was that Parks officials routinely lie to the PEP officers, reporters, vendors and to federal judges about what the rules actually are and how they are enforced.

In each of my federal lawsuits the lawyers for the Parks Department committed numerous acts of perjury, both in written briefs and in oral testimony, before federal judges. They lied about what the rules were; how they were enforced; who they were or were not enforced against; and why the rules were created in the first place. The three Parks commissioners I personally dealt with during those years also lied on a routine basis to reporters and judges about what the rules were.

During the course of the lawsuits, they frequently temporarily changed the rules, so as to confuse the judges about each and every aspect of enforcement. Part of the reason the PEP officers are so ineffective when it comes to enforcement is that the Parks Department lies to them, as well. I’ve never met any PEP officer that actually knew the park rules.

What follows is a very brief outline of the park vending rules as applied to artists and performers as modified in 2010. To read the full text of the rules see expressive-matter-faq.pdf.

No one can sell anything in any New York City park without a Parks Department permit. The exceptions are vendors who have bought a Parks Department concession; visual artists selling paintings, books, prints, photos or sculptures; or performers. Performers are allowed to solicit and accept donations but not to sell anything (although most are selling CDs and other merchandise).

In addition to the requirement in the four parks mentioned above to stand on a medallion, artists and performers (but not concession vendors), in general, must be 50 feet from any park monument or fountain; on a path or sidewalk that’s at least 12 feet wide; at least 5 feet from any bench, tree, sign or park furniture; and not on the grass.

No one can sell clothing, jewelry or crafts on the street or in any park without a vending license, based on the Street Vendor Project losing a federal appeals case, Mastrovincenzo v City of NY, 2006. The exception is materials with a First Amendment-protected message, such as politics or religion.

Now here’s the problem in Washington Square Park. Due to all the trees, benches, the narrow paths, the fountain, etc., there is no legal space in all of Washington Square Park to legally vend. In this brief video clip, below, PEP officers in the park explain this fact to artist Joe Mangrum:

So, in other words, all the vending in Washington Square Park other than the hot dog cart concession is technically illegal. Likewise, virtually all the performers are violating numerous sections of the rules, such as, on keeping their distance from objects; playing on park paths that are the required width; selling versus soliciting donations; using tables or stands of any kind; and using amplified music. Needless to say, vending marijuana and alcohol is not allowed.

Vendors who call or visit the Parks Department to find out what is or is not legal are routinely misinformed about the rules. While the rules are written in black and white, the enforcement changes day by day. No one, including the PEP officers, can ever be sure what the rules that will be enforced are.

Aside from all the lying about the vending rules, city officials and the N.Y.P.D. are also feeling a lot of heat over making vending arrests that are perfectly legitimate. For example, a number of arrests of immigrant food vendors who completely flouted the laws exploded into widespread negative coverage about vending enforcement. That, in turn, has caused the N.Y.P.D. to become very hesitant to enforce any vending laws, for fear they will be depicted as racist. This explains why people could set up alcohol and marijuana stands in a New York City park where vending of any kind is basically illegal.

What is needed is for the Parks Department to revise the vending rules so as to make them clear, unbiased and equally enforced. The distance from benches, fountains, monuments and trees should be modified to a reasonable distance. The medallion requirement should be eliminated altogether. Artists and performers, both fully protected by the First Amendment, should have the same exact rules and be enforced against the same. However, they have not been enforced against the same, ever.

When government officials consistently lie about what the laws are, you can’t expect vendors, artists and performers to do anything other than make up their own rules.