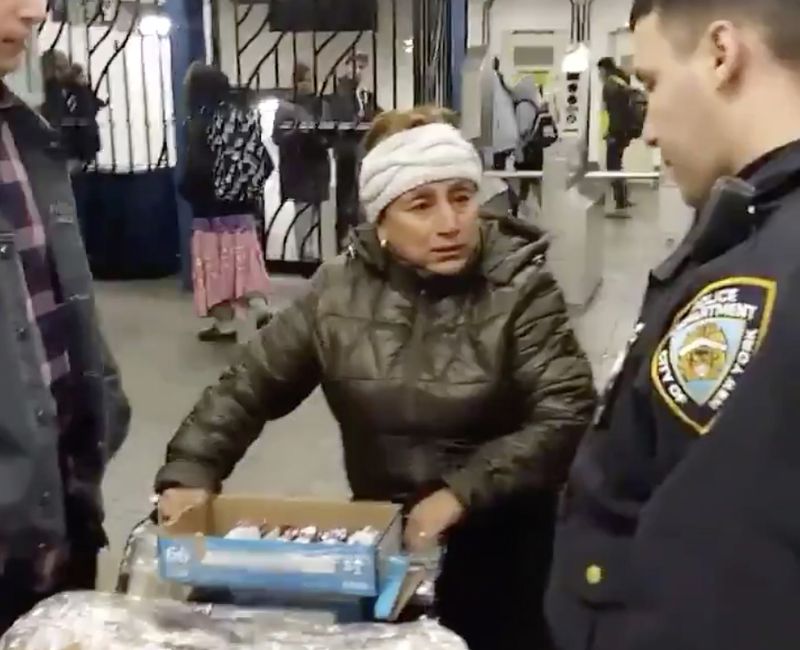 A screen-grab from a video, above, shows a female churro vendor inside a Brooklyn subway station being confronted by police. (Twitter/@SofiaBNewman)

BY ROBERT LEDERMAN | As you have no doubt seen and heard, two recent arrests of immigrant women vending churros (a long donut-like pastry) has resulted in a huge controversy.

The media and elected officials have feigned outrage over the two arrests and they are linking both to two new proposed vending laws, which, if passed, would forever change New York City vending — for the worse.

The two arrests are being used as “proof” that all of the vending laws need to be radically changed.

Need I mention that the Street Vendor Project, a City Council-funded front group that has spent years trying to eliminate the rights of street artists, helped write these two proposed laws and is using all of its resources to get them passed?

The City Council bill was cooked up by a giant food-vending corporation, MOVE Systems, funded by Wall St. billionaires, the Street Vendor Project and a past City Council speaker with direct ties to the food company.

Suddenly, both the media and the elected officials are pretending that vendor arrests are either unknown or rarely happen and they are further pretending that this was some kind of racist attack by the New York Police Department on Hispanic vendors.

The reality is that all vendors experience some degree of harassment. There are thousands of vendors arrested in New York City each year and tens of thousands summonsed.

These women had many previous summonses for vending in the subway and simply refused to stop doing it. These were legitimate police actions not harassment.

One can feel sympathy for anyone being arrested or summonsed while at the same time recognize that there are vending laws for a reason. Food vending laws are, to my thinking, the most reasonable vending laws.

These two women were unlicensed, had no food vending permit, a completely illegal cart and were vending in the subway, which is illegal for all vendors, regardless of what they sell.

If there is any type of vending that actually needs to be closely regulated, it is food vending.

A single food vendor with a communicable disease or a dirty cart, or who mishandles food, can create an epidemic. That’s why food carts require a vending license, a food cart permit and a certification in proper food handling. They don’t want food vending in the subway because New York City subways already have a huge rat problem and food vending would make it much worse. Imagine trying to get into a subway car or out onto a rush-hour subway platform that is crammed with food carts.

For most of my life, I worked as an illegal vendor. I am not opposed to anyone getting a vending license. But I am opposed to fake vending reform that pretends to be about helping poor vendors but is actually about helping the biggest and wealthiest food vending corporations.

The two proposed laws are a scam. They want to completely eliminate any cap on how many food vendors there can be and make getting the license and permit very easy.

But there’s a catch.

Under the proposals, a legal food cart would have to have hot and cold running water. The carts would cost anywhere from $5,000 to $50,000. The cart and the food would have to be stored in an authorized commissary, which would cost many thousands more. And, they still would not be able to vend in the subway, let alone vend from a cardboard box on top of a shopping cart.

What’s more, these proposed laws provide that a vendor getting four summonses loses his or her license.

The City Council bill would put all vending decisions into the hands of the business improvement districts, or BIDs.

And the law being pushed in Albany would give cities and parks the right to create any new limits on vending they like.

What’s the real agenda behind these two proposed laws? Is it about helping poor immigrant vendors?

Apart from scoring points for political correctness, it’s about helping giant food corporations take over all vending. Currently, a food vending company can only own one food vending permit.

By increasing the number of permits out there (removing the cap) these food vending corporations could temporarily buy up thousands of permits from the vendors who obtain them, exactly as they do now with a huge black market in food vending permits.

Once the streets are completely overrun with thousands of new food vendors, the city would have no choice but to create a concession system — exactly as exists throughout New York City’s parks — where two or three companies own every food cart and stand. Immigrant employees paid less than minimum wage run these stands.

That’s the wonderful future the elected officials are setting up for the vendors they are pretending to help.

When you see these hypocrite elected officials posing as champions of the vendors, don’t forget that it is these exact same pols who wrote the vending laws and who mercilessly pressure the police to enforce them.

The very same media outlets pretending to be outraged about these arrests, such as The New York Times, have spent decades demanding crackdowns on vending. In fact, The Times started the Times Square BID, one of the most anti-vending organizations in New York City.

One might ask, how is this different from the city arresting street artist vendors in the hundreds from 1993 to 2001? Didn’t we protest hundreds of times? Didn’t we try to change the vending laws?

The difference is that artists were already considered to be First Amendment-protected by the Manhattan district attorney as early as 1993. Every one of those arrests was illegal and unconstitutional. However, there is no constitutional right to vend food in the subway.

Moreover, we changed the vending laws in such a way as to help all vendors.

In fact, under the rights we won, immigrant vendors can legally sell books, art, CDs, DVDs and other First Amendment-related materials without any license or permit.

These proposed bills are poison to every form of vending.

To our politicians: Please stop exploiting immigrants to make yourselves appear to be enlightened public servants.

You are fooling no one.

Lederman is president, A.R.T.I.S.T. (Artists’ Response to Illegal State Tactics); He has vended in New York City since 1962 as both a street artist and a food vendor.