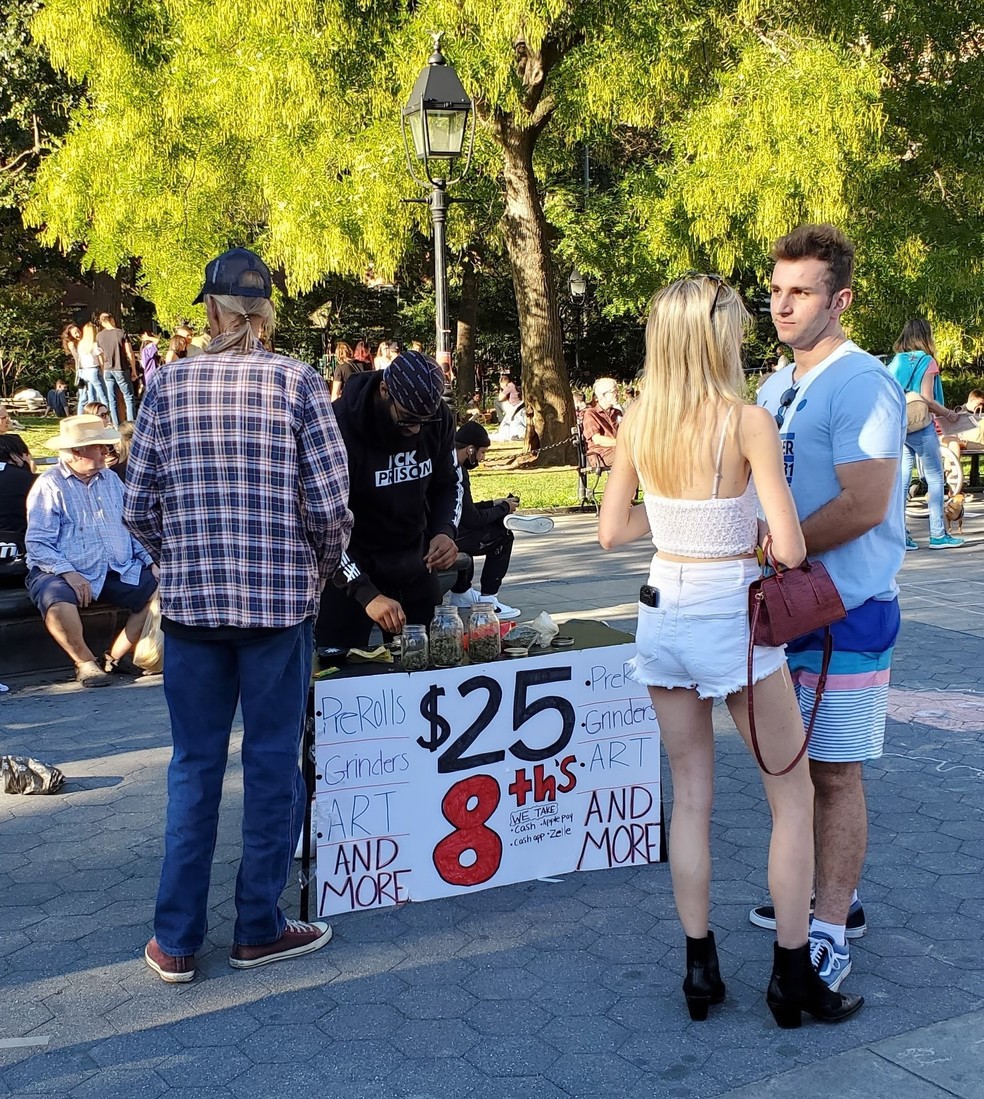 A weed vendor in Washington Square Park was recently advertising his price as $25 for an eighth of an ounce. (Photo by The Village Sun)

Up in smoke: Parks Dept., police crack down on Washington Square pot bazaar

There’s a new Parks Department captain in town — and he’s cracking down on vending in Washington Square Park, and that includes the park’s new “cannabis casbah.”

Captain St. Louis, the new commanding officer of Park Enforcement Patrol (a.k.a. “PEP,” the Parks Department’s green-uniformed officers) for Manhattan South, met Thursday with Sixth Precinct police officers to discuss conditions at the landmark Village park. Illegal vending is something the Parks honcho definitely plans to address, according to Evrim Can, a precinct community affairs officer.

“We want Parks to take the lead with vending, skateboarding, all quality-of-life issues in the park,” Can said. “He’s already enforcing the vending. He’s going to enforce it, and we’re going to be behind him. We already agreed to that.”

Can said St. Louis has a plan for the park.

“He sees some issues that he wants to correct,” he said.

According to a Parks Department spokesperson, on Wednesday PEP officers and cops chased out around a half-dozen vendors from Washington Square.

“We are working in collaboration with N.Y.P.D. to address unauthorized vending at Washington Square Park,” she told The Village Sun. “Our Parks Enforcement Patrol (PEP) officers removed five vendors and issued two summonses for operating without a permit yesterday. We will continue to adjust our approach as needed.

“Our PEP officers’ first course of action is to educate parkgoers to our rules,” the spokesperson added. “If [the rules are] not followed, the next step would be to issue a summons, and only in extremely rare circumstances would we effectuate an arrest.”

It was not clear how many, if any, of the above vendors were selling marijuana products. Asked for clarification, the spokesperson did not provide an immediate answer. Meanwhile, the Sixth Precinct’s Can said Parks would be the ones to ask about how many of the vendors in question were offering ganja. However, many of the vendors recently in the park have been peddling pre-rolled joints, edibles, pot gummies and the like.

More broadly speaking, vending in parks and on New York City public property, in general, must receive the proper approvals from the appropriate city agencies. On the other hand, First Amendment-protected “expressive matter,” such as printed material and artwork, is allowed, with some conditions.

Some vendors might contend they aren’t selling anything, rather merely accepting “donations” — but the regulations don’t allow for that, either.

The “no donations” rule, however, does not apply to musicians playing in the park because busking is also considered protected free speech, according to the spokesperson. Amplified sound, on the other hand, has been the main issue with musicians.

According to the Parks Department’s rules on vending: “No person in or on any property under the jurisdiction of the Department shall sell, offer for sale, hire, lease, or let anything whatsoever, including, but not limited to goods, services, or entertainment, or provide or offer to provide services, items, or entertainment in exchange for a donation (hereinafter “vend”), except under and within the terms of a permit, or except as otherwise provided by law.”

Other vendors in the park have been selling clothes, like T-shirts with slogans printed on them, jeans and more, displayed on standing garment racks, a seeming violation of park rules. On the other hand, the guys who peck out poems on demand on manual typewriters are probably allowed to do so since it’s “expressive matter.” As for a vendor who sells handmade phallic-shaped candles, it wasn’t immediately clear if it would be allowed as “expressive matter.”

Corrections: The original version of this article incorrectly said that musicians busking in the park cannot technically accept donations under the Parks Department regulations on vending. A Parks spokesperson subsequently clarified that because busking in the park is considered “expressive matter,” accepting donations for it is allowed. In addition, a photo caption in the original version of this article said vending one’s own handmade jewelry in the park would be allowed since the jewelry would be considered “expressive matter,” as well. But Robert Lederman, president of A.R.T.I.S.T. (Artists’ Response to Illegal State Tactics), subsequently clarified that vending jewelry in New York City requires a vending license.