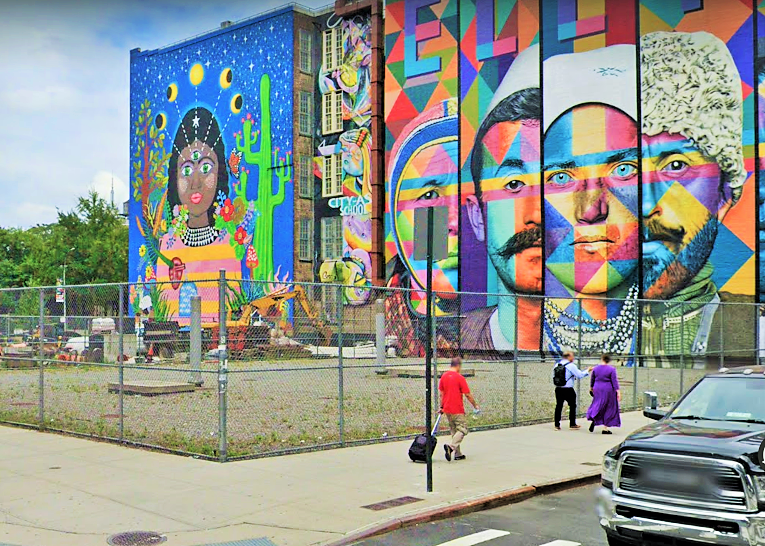 The southern half of the D.E.P.-owned lot at Hudson and Clarkson Streets cannot be built on because access must be maintained to the water-tunnel shaft below. (Google Street View)

Opinion: How many concrete canyons does Greenwich Village need?

BY LYNN PACIFICO | Venerating nature as the basis of life, the ancients set aside areas around natural features, such as caves, waterfalls, springs and groves, as sacred. These areas were considered healing and, in their reverence for the earth, visitors were reminded that, as children of the great mother, they were a part of nature, and also sacred.

Modern society has forgotten our symbiotic relationship with the earth. But the old city planners, still intimately involved with their farms and gardens, realized nature’s importance and set aside percentages of land for parks in each neighborhood. We are relational beings supposed to interact with the natural world. Technology and the “metaverse” cannot substitute for the vital life force that nature gifts us.

We have the only living planet that we know of. Yet we think that we are smarter than nature and, through arrogance, believe that we can ignore and profit from her without paying a price. If children don’t receive care from their mother, they will wither away and die. And so, through our dissociation, we are facing personally the increase in dissociative illnesses, like attention deficit disorders and dementias, and globally with extreme weather…and extinction.

In the words of Hubert Reeves, the Canadian astrophysicist, “Man is the most insane species. He worships an invisible God and destroys a visible Nature. Unaware that this Nature he’s destroying is this God he’s worshiping.”

This neighborhood didn’t used to be as manicured as it is now. The West Village not long ago was largely vacant lots, print shops, storage, parking lots, old hotels and empty buildings. According to the Gaia Hypothesis, the earth will regulate itself if allowed. These neglected Village blocks allowed for naturally “free” areas.

We also had fields: Greenwich Village had a large open field at Houston and Mercer Streets until New York University built a gym on it. The West Village had J.J. Walker Field until it was blanketed with artificial turf in 1999. Both multiuse fields were used by the people who lived around them: kids and ball players during the day and dog owners in the evening.

The old fields had natural surfaces and weeds grew along the fences and in corners. This area is also a flightpath for migrating birds and there used to be a lot of birds here. The act of witnessing seasonal changes as nature was busy popping up weeds, bushes and trees and the birds that came for them, provided a grounding meditation and a relief from the demanding busy city life.

Our district has the least amount of open space and natural areas in all five boroughs. Our multiuse fields are now artificially turfed for the exclusive use of league sports, and with the gentrification of Greenwich Village and the development of the West Village’s “Gold Coast,” we have no natural areas left.

The amount of people living and working in the neighborhood continues to grow. The crowds looking for lawns and shade during the COVID lockdown and after, clearly illustrate that there is not nearly enough park here.

“But man is a part of nature, and his war against nature is inevitably a war against himself,” environmentalist Rachel Carson said.

If we act now, we can create more park, and maybe even create a children’s play garden/farm, and an additional field, by converting the western half of Clarkson Street and the Department of Environmental Protection water tunnel site on Hudson Street between Clarkson and Houston Streets, to parkland. The Tony Dapolito Recreation Center across the street, with its youth community center, is being renovated. Certainly, it can use more land, as can City-As-School next door.

A seating area is proposed for the southern portion of the water tunnel site due to access needed to the water shaft below. The northern part of that lot, thanks to deals made in community politics, is slated to be developed as “affordable” housing. (The affordability, however, will last just 30 years before reverting to market rate. Actual affordable housing can be created by modifying existing buildings.) With the tall buildings to the east, west and south of the water tunnel site, building on the lot’s northern half will create a concrete cavern around the planned seating area. This area will need to have plastic grass since it will get very little sun and light and no nature. A new building would also cast part of the J.J. Walker Little League ball field into shadow.

No matter how fabulous our technology, or how much money we do or do not have, or how much profit can be made, being in natural areas is a basic human need. Our Parks Department, along with its advisory organizations, must work to protect and increase natural areas as our changing residency requires.

“All of our exalted technological progress, civilization for that matter, is comparable to an axe in the hands of a pathological criminal,” Albert Einstein said.

Those of us who live here now, as well as future residents, do not need more concrete caverns. We do need more nature. Please preserve the last open space while there is still time. There should be no building on the Hudson Street water tunnel site until this is sorted out and a plan is made to use this precious area in the best way.

Pacifico is a longtime activist for dog owners and open space in the West Village.