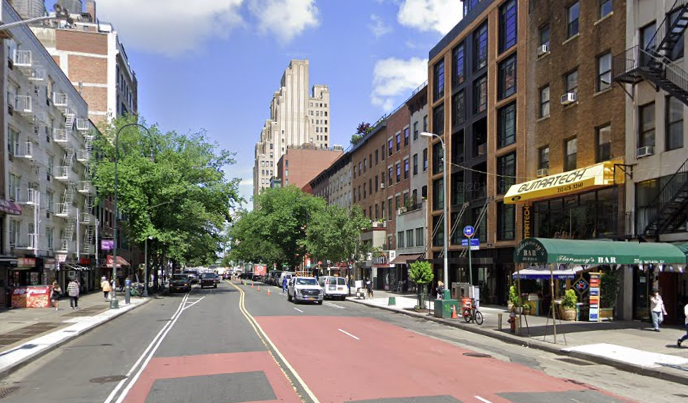 BY GAIL FOX | I wrote this as a response and more to The New York Times article “14th Street, Manhattan: A Congested Thoroughfare Transformed,” in the Nov. 20 Real Estate Sunday section.

None of those interviewed for that article walk in my shoes or that of my neighbors. Those responsible for the 14th St. busway and traffic plans declared victory after its first week.

No one has our back.

As a longtime Union Square and Village resident, I am an advocate for the elderly and for the community. I feel strongly that the 14th St. busway and traffic changes have all been done without meaningful and comprehensive community inclusion and input.

Present-day 14th St. has become a complex world of too many quick fixes. I am frightened — actually terrified — of bikers going in every direction. Drivers make mid-street U-turns. There are jaywalkers, buses “bunching” after I’ve waited long past the scheduled times at the bus stop, intersections blocked, avenues gridlocked. And there are few to no enforcement officers. (The current traffic-agent presence for the busway is painfully obvious P.R.).

Other times, 14th St. is a desolate ghost town of empty storefronts. There is no voice in this entire process that has an absolute handle on what makes 14th St. work or fail. When will there be meaningful, inclusive dialogue?

When I have errands, I try to plan in advance, so I can take my shopping cart for the added protection of standing out and looking more conspicuous. Mere signage is no protection for us pedestrians.

One friend who is 101 years old, and another who is recovering from hip surgery, in order to return home to Fifth Ave. and 14th St., will soon incur much higher cab fares due to having to go around unnecessarily circuitous extra blocks to discharge a passenger on 15th St. My post-surgery friend was refused a trip home by a taxi driver who said there were too many restricted turns and there was no route that was “allowed.” She did call 311, and still the driver refused.

A friend who lives on 13th St. and University Place cannot get car service pickup unless she walks two to three blocks to “meet up.”

I was in a north/south crosswalk at 14th St. and University Place and at least four bikers going different ways whizzed by, inches from me. I turned to the two busway traffic agents standing mid-street and said, “Did you see that?” One of them simply responded, “Are you from New York?” This is not acceptable, and it drives home the point that the new 14th St. traffic busway setup is fraught with age discrimination.

Bus stops have been taken away, which puts the elderly in a situation where they are forced to walk several blocks, and some are simply not able to do this. Plus, the elderly are thus being put in danger for a longer period of time by errant bikers.

The new bus-stop extension platforms, with one bump or slant at the front, are difficult for someone with a walker or someone on foot because they present a trip hazard. And the hollows under the extensions make a perfect place for rats.

Here is one idea: I have submitted to 311 the issue that crosswalks are in need of a repaint. The stark white lines would provide safer space for pedestrians.

Also, I seek a real and meaningful concession for the elderly in the form of keeping access along 14th St. for cars and taxis. The signage as it exists now is unclear to drivers and pedestrians alike. Revamp the signage and flow will improve.

Third, I seek a fuller, meaningful, more inclusive study of the busway during normal (non-holiday) times, without the false positive of specially assigned traffic agents.

We need a fair assessment that is fair to everyone. Elected officials campaign to assure the elderly and all the community that they “have our backs.” Prove it now! We’re watching and waiting to be heard!