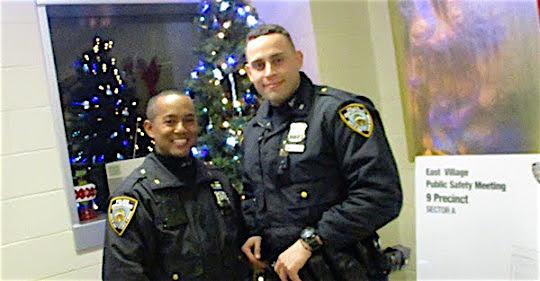 BY MARY REINHOLZ | There were holiday snacks and festive decorations that included blown-up balloons of Santa Claus and a snowman that quickly deflated. But there was also good news for about 35 locals who recently gathered on the second floor of the New York Police Department’s East Village stationhouse.

Crime in all categories, particularly burglary, was down by 10 percent over the last 28 days for the last month and by 10 percent over all compared to last year, said police Lieutenant Alen Barakovic, who spoke at the December meeting of the Ninth Precinct’s Community Council.

What about homicides in the last 28 days, inquired this reporter, after noting that police officials had announced a slight uptick in murders even before Barnard freshman Tessa Majors was fatally stabbed on Dec. 11 near her campus.

“Zero” murders in that time frame in the Ninth, replied Barakovic.

Asked if any arrests had been made among the hordes of SantaCon revelers who descended on his precinct on Sat., Dec. 14, Barakovic — who was filling in at the meeting for Captain John L. O’Connell, the Ninth’s commanding officer — said there were only five red-suited pub crawlers busted, all for disorderly conduct.

To what did he attribute this awesome reduction in crime? Without hesitation, Barakovic smiled and waved to a line of unformed cops who stood at attention in the conference room.

“Why of course the crime reduction is due to these fine officers,” he said, as several of them chuckled.

All  gave reports on their work in the precinct. There were few questions from residents.

The Ninth doesn’t allow photos or videos inside the stationhouse, but Barakovic allowed The Village Sun to take pictures in the conference room. The meeting wound up within 20 minutes.