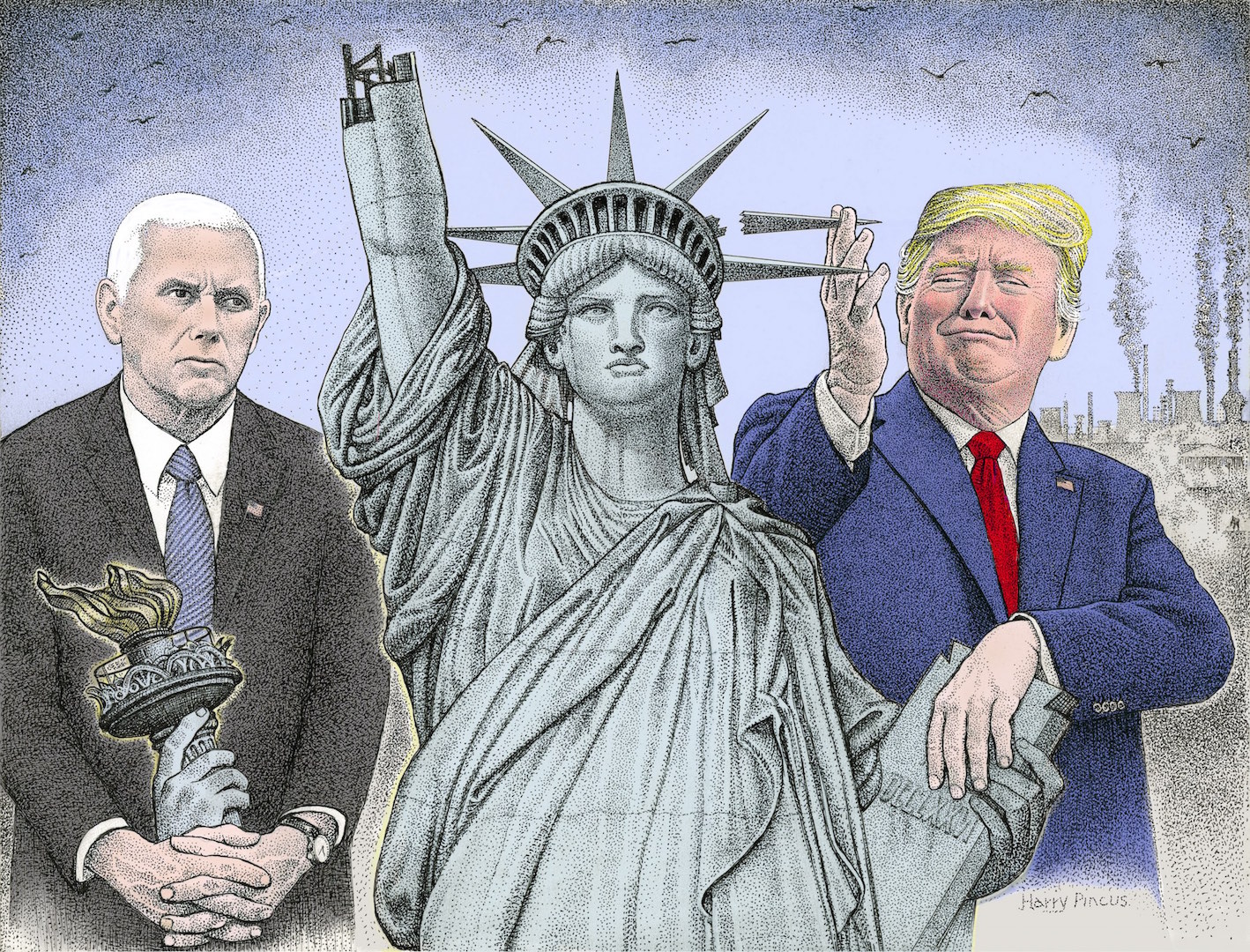 On the sacking of our Capitol

BY HARRY PINCUS | We are a people in deep crisis.

In the midst of a devastating plague, we have collapsed, and lost sight of what is truth. We are clawing toward a light, hoping that it is a clean and healthy light, but fearing that it is the light of our final annihilation.

There has been an attempted coup d’état in our land, and it has not yet failed. Unlike 9/11, we cannot look over our shoulder for outsiders who threaten our existence, because the threat is from within. The hopeless peasants, the white supremacists, the meth heads and the pinheads, the Viking and the dope in the Auschwitz T-shirt have arisen with their pitchforks and no Republican is safe at the airport.

Along with the so-called “deplorables” are elites, who take their marching orders from miked-up racists, bitcoin gamblers and conspiracy theorists. The whole can of worms has broken open. The freak show has come to town. And as we flail and struggle, the whole world is watching.

The president is a criminal, cornered and desperate, and Death is waiting on every street corner, out of control and wiping out thousands of us every day. It’s driving us all mad, and so about half of our people have elected to destroy ourselves, and our society, in a death spiral of hatred. Our hospitals are full, our byways are morgues, and our government is broken. We extend our arms and pray that a needle will save us, while we arm ourselves with guns, delude ourselves with drugs, and face the empty screen of existence with little hope.

Christmas is over, and it’s hard to believe that the best is yet to come. We are tattooed, pierced, addicted, bloated and perplexed.

The crisis is not about any one man, or the events of any one terrible day. We are facing a cancer of despair that has been growing from within, a crisis of emptiness and an inability to adapt. The Tribes have collided on a broken Main Street, where a world of loners in Red Hats roam aimlessly through a landscape of detached digital synapses and dystopian signals. Make America Great Again, they plead, hoping for a world that never existed, where everyone will look like Goober at the gas station, and follow the dictates of an Aryan Fuhrer. Six million is not enough!

And so a man punches an old cleric in the subway, because, as he said, “I just wanted to punch someone.” Cops shoot black men in the back, and walk free. Neighbor sues neighbor, and “Soho Karen” has anger-management issues. We have arrived at the crossroads of Greed and Dishonesty, sold our souls to the Devil. And received nothing in return.

A dumpster in Seattle is spray-painted with the motto “I hate you, Mom,” while the garage door of the speaker of the House of Representatives is spray-painted, “We want everything!” The window across the street said, “Fuck our Fascist Government” this morning, but an hour later, it was gone. “I just want 11,880 votes!” screeches the newly castrated dictator at a low-level official.

Main Street is over. Craft is anachronism.The theater really is dead. The TGIF in New Jersey was full on Saturday, but they are gone now, disappeared in a mist, back to Brigadoon.

What would have happened if a German conscript named Hitler had found a bullet and been killed in the first World War? Would there never have been a Holocaust, or a Second World War? What if Frida Kahlo’s trolley had delivered her safely to school, and continued on, until it jumped a curb and killed Hitler? Would Frida have married a dentist instead of her Diegito? What if Hitler had smoked weed and learned to paint better? Would he have been hired to illustrate promotional brochures for Trump Village, and taken art directors out to lunch at the Lotos Club?

How is it that one human megaphone can rise up and stir all of the hatreds in humanity as easily as a microwave excites the atoms in my cup of coffee?

Hurt people hurt people, and so it is pain , plain and simple, that gave us Hitler and Trump. What cruel and withholding Teutonic patrimony was shared by Alois Hitler and Fred Trump? We know Whistler’s Mother, but what of Hitler’s Mother or the Mother of Donald Trump? What milk of kindness was withheld? How did these men speak to the pain in every human soul, stir it, amplify it and manipulate it, until they control armies and cause holocausts?

The violent and deadly sacking of our Capitol was not the work of a foreign enemy. Those who argue that it came from Russia or China choose to ignore the fact that The Fury that erupted was predicated by none other than the president of the United States, who was simply trying to overturn his own expulsion.

Five people are dead, a cop had his head crushed by a fire extinguisher, shit was smeared on the walls, and Nancy Pelosi’s seat was defiled, whatever that means. It reminds me of the time when we took over the office of the college president, a former nun, and sprayed her feminine deodorant spray all over the conference room. But Trump has no sense of humor! No irony.

Why doesn’t he set a little campfire on the grounds of the White House, strip naked and roast marshmallows, like the Marx Brothers did in Irving Thalberg’s office? Hopefully, Trump won’t want to ride out on a nuke, like Dr. Strangelove. Alas, it seems like we will only have an orderly transition when this guy is removed in a straitjacket by orderlies!

It’s said that the stuttering King of England listened to the speeches of Hitler in newsreels and compared Hitler’s voice to the sound of a wild animal. We have heard that bestial screech right here, exhorting us to march up the Avenue, break glass and and loot and burn. We have been Trumped and the beast of hatred and chaos has been let loose upon our land. Now we will have to be patient and understanding until we can collect the lost and broken souls amongst us.

The furious mob broke glass in the temple that is the People’s House this week, just as they did on Kristallnacht.

I was thinking of my beloved Steeplechase, the last great temple of Coney Island, where the glass was broken by old Fred Trump. The buildings still looked like Les Halles in Paris, and the surreal 19th-century visage of George C. Tilyou, with his hair slicked down the middle and his dozens of teeth, was still presiding over the old amusement park on the windswept boardwalk. The roller coaster still rolled, the blast of air still blew up the ladies’ dresses and that huge concrete barrel you had to walk through when you left the place was still spinning.

Then the father of “our president” bought it all, promising to give it back to the people, before he sent out engraved invitations, instructing his swell friends to arrive in their formal attire. Fred Trump handed each a brick, and instructed them to break a pane of glass. Kristallnacht had come to Coney Island. A few days later, the bulldozers took away Steeplechase forever. This is the legacy of lies and broken glass that informs “our president.”

Some of my old friends have gone over to Trump and, sadly, they are lost to me forever. The son of the Cub Scout pack master who taught me patriotism is gone. So is the hedge-fund legend whose father was a Coney Island cop that my father Irving called “the greatest man I ever knew in my life.” All gone! My dear old friends, intelligent, brilliant even, but they are loners.

The Trumpers I know feel isolated in their dreams of money, guns and toy soldiers. They try to warm themselves before the hearth of the great corporate eunuch, Lou Dobbs, and recite conspiracy theories about Internet enemies.

Our new president, Joe Biden, will be an old frontiersman. He said that the sacking of the Capitol will make it easier for him to govern, because this is a moment of clarity. It was a clever answer.

He himself is purified, and almost saintly, burnt to a white ash from the losses he has already suffered in life. If anyone can understand this pain we are in, it is this good man, who will soon ascend to his destiny, and ours.