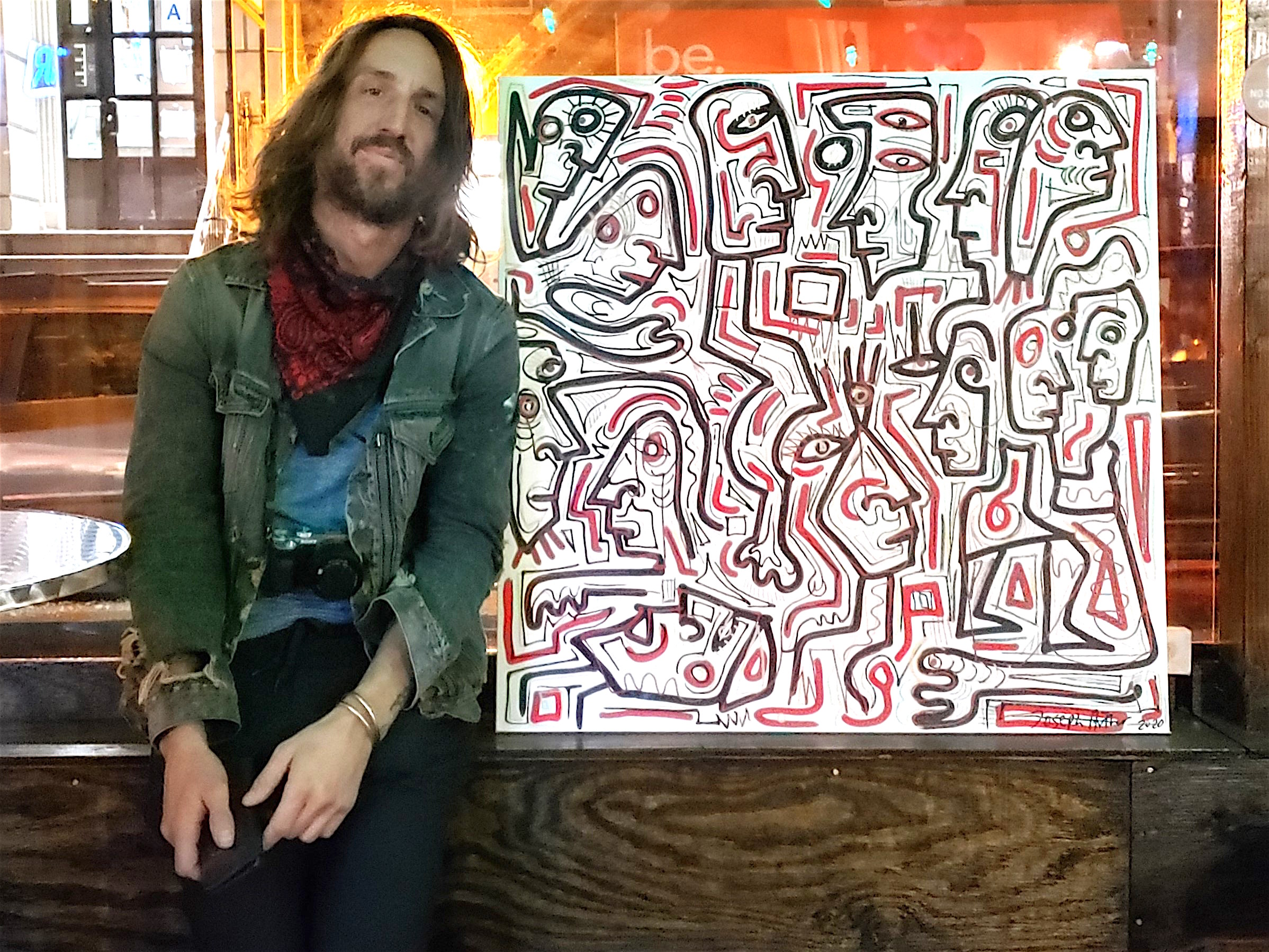 Joseph Arthur with one of his paintings at Kavasutra Kava Bar on E. 10th St. last week. (Photo by Everynight Charley Crespo)

BY EVERYNIGHT CHARLEY CRESPO | Although little celebrated, numerous musicians have moonlighted as visual artists, from Frank Sinatra and Tony Bennett to John Lennon and Yoko Ono to Fiona Apple and Swizz Beatz. Never before, however, has there been a dedicated venue for the exhibition of this body of work by musicians.

On Tues., Nov. 17, the new City Winery at Pier 57 will open a second-floor gallery to showcase visual art created by musicians. The first installation will be a collection of paintings by Joseph Arthur.

Michael Dorf, C.E.O. and founder of City Winery, a national chain of restaurants and live music venues that began in New York City in 2008, conceived the idea and is making it a reality in the newest City Winery, which opened last month. Dorf saw the potential in converting a second-floor passageway into much more than a hallway.

“This is a public gallery where we hope to change artists every three or four months,” Dorf told this reporter. He is already contacting numerous musician/artists regarding future installations. “We are thrilled to start with our good friend and very talented friend Joseph Arthur.”

The gallery will debut to the public this Tuesday from 6 p.m. to 8 p.m. Afterward, Arthur will perform a concert from 8 p.m. to 9:30 p.m. in the venue’s main space.

“The public is invited, albeit in reduced capacity because of COVID,” Dorf said.

“Painting has saved me during the lockdown,” Arthur told this reporter. “It has given me a place to focus my energy and drive.”

“Michael decided to create a gallery space in this new location,” he said. “It is actually really great for seeing this work — plenty of walls and plenty of wine.”

“This art show is a culmination of the work I did all last year, from my residency at Fotografiska, New York, to the flowers I painted over quarantine at Michele Mack’s gallery,” Arthur added. “It is a very New York City art show.

“It is happening at City Winery because they had me paint a 20-by-10-foot giant piece for permanent display, which will be up in time for the show,” he said. “I also have a couple of giant paintings on permanent display in their Chicago location.”

No doubt, Dorf will strive to bring many of these artists’ works to the new gallery.