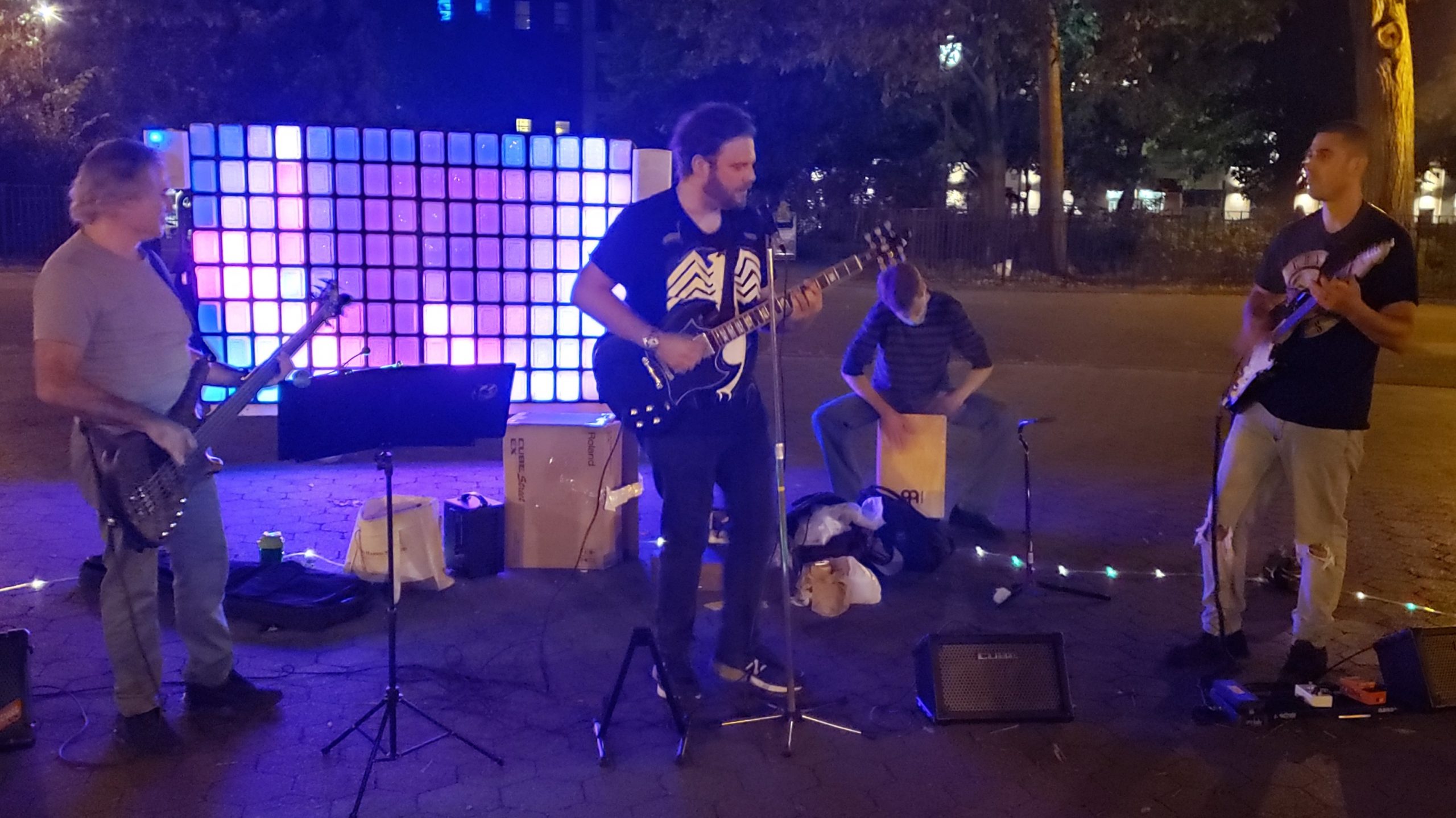 Whiteclaw playing at an earlier show in Tompkins Square Park, on Sept. 17, with their signature light wall. (Photo by Everynight Charley Crespo)

‘Offender’ doesn’t ‘let there be lights’ at Whiteclaw show

BY EVERYNIGHT CHARLEY CRESPO | With concert venues still closed, rock bands these days do not get many opportunities to practice their chops or gain an audience.

Sidewalk cafes tend to hire quieter performers, like jazz and world music acts. Once a band brings out a drum kit, the tenants living above or across from the cafe complain about the noise, no matter how early the music ends.

Rock bands have few options to play for an audience except in the public parks, where amplified music is prohibited without a sound permit. Many musicians play anyway, hoping that the Parks Enforcement Patrol officers will not come by to unplug them.

Brooklyn-based Whiteclaw has been performing in Tompkins Square Park once a week for more than a month, playing covers of classic rock songs by Tom Petty and the Heartbreakers, Green Day, Soundgarden, the Marshall Tucker Band and more. The quartet has no drums, with a percussionist slapping a box with his palms for rhythm. The band creates a stage by forming a circle of blinking party lights on the ground around the musicians and their gear. The first time the quartet performed, the musicians even brought a vertical light panel that they displayed behind them for a psychedelic effect.

On Thurs., Oct. 15, Whiteclaw took a break because a young woman, seemingly intoxicated, repeatedly interrupted the performance with disruptions. When the woman walked away, the band resumed its performance — but, upon hearing the music, the woman returned.

As the band performed, the woman lifted the string of lights from the ground, wrapped it around her neck and started to walk away, dragging the lights with her. The band stopped playing and some of them and the audience tried to wrest the lights from her, but she would not surrender them, intent on stealing them.

Thinking they were rid of her, the musicians refit the remaining lights into a straight line in front of the staging area and resumed the music. The woman returned and began destroying the remaining lights. The concert was over. The band members packed their equipment while some audience members reported the woman’s action to the police.

“Last night was definitely a bummer, and we were disappointed that our efforts to de-escalate with ‘the offender’ did not seem to work,” Tristan Vaughn, the lead vocalist and guitarist for Whiteclaw, told this reporter. “That said, I did speak with the officers present prior to exiting the park, and they were receptive. There was no negative commentary from them about our presence or playing.

“Hopefully that will not change, as we did not want any trouble,” Vaughn said. “They were, however, ultimately able to find ‘the offender’ [who returned several times] and were able to take her to a park bench and call her an ambulance. As such, I am hoping this ended in the best way possible, whereby the person involved will get some help, so they do not hurt themselves or inconvenience others.

“I did get the impression that she has been in the park before. She seemed to be known by many of the locals attending.

“Aside from the negativity,” Vaughn continued, “we did get some positive feedback from the community regarding our performances in the park. It seems like people were excited to come out and welcome us back to continue playing. That was great to hear from the other locals on our way out!”