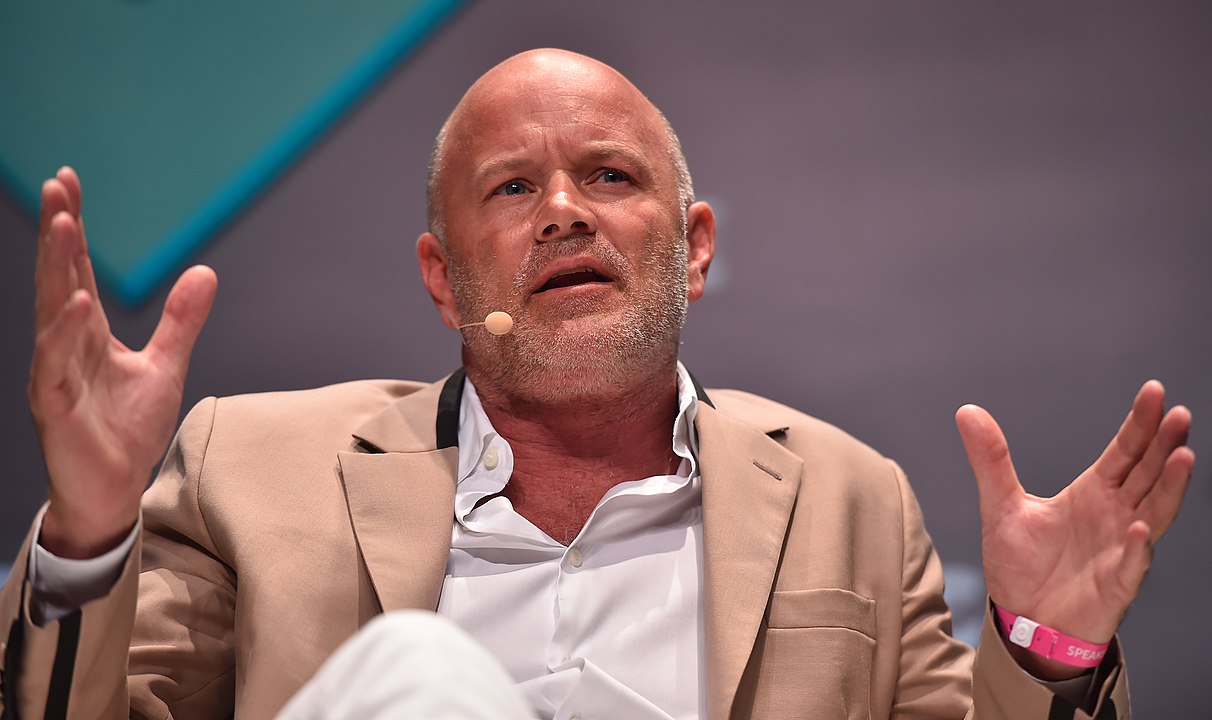 Michael Novogratz speaking at a financial conference in 2018.

BY LINCOLN ANDERSON | Updated May 16, 12:00 a.m.: Financial titan Michael Novogratz was in the headlines last week as he took a multibillion-dollar hit in the reeling cryptocurrency market.

On a local level, though, the digital currency booster also made quieter news a month ago — and earned accolades for his past leadership — when he stepped down as the chairperson of the Hudson River Park’s main nonprofit fundraising group, Hudson River Park Friends.

According to a Friends board member who requested anonymity, the two events have nothing to do with each other.

“It has been in the works for six months,” the board member said of Novogratz’s giving up his position at the Friends. “He had planned to step down long ago. He served the organization really well, raised a lot of money for the park, and he figured it was time to move on.”

The board member noted that Novogratz originally only took on the Friends chairpersonship in 2013 because developer Douglas Durst had abruptly quit the post due to a falling out with Madelyn Wils, the former C.E.O. of the Hudson River Park Trust.

Similarly, a Friends spokesperson said, “Mr. Novogratz informed the Hudson River Park Friends board three years ago that his next three-year term would be his final. We announced at our gala in October that he would step down as chairperson early in 2022 and that Diana Taylor had agreed to serve as his successor. The board formally nominated and appointed Ms. Taylor as chairperson at our January meeting and Mr. Novogratz’s term officially ended on Jan. 31.”

In contrast, the cryptocurrency debacle was the opposite of calm and orderly. On Thursday, it was reported that Bitcoin and similar digital currencies had plunged to their lowest prices in more than a year and were in “free fall.”

According to the New York Post, Novogratz is among the top five “biggest losers” in the “crypto sell-off” — with his fortune shrinking from an estimated $8.5 billion last November to $2.5 billion today. Other major losers included the Winklevoss twins — whose fight with Mark Zuckerberg over the rights to Facebook was portrayed in the 2010 movie “The Social Network” — who are said to have lost around $2 billion, or 40 percent of their wealth, in the crypto crash.

The epic tanking of one particular digital currency, LUNA, is being deemed the “most spectacular.” Novogratz, who was formerly a principal in Fortress Investment Group, is currently the C.E.O. of Galaxy Investment Partners, which focuses on cryptocurrency investments. Novogratz was one of the biggest backers of LUNA, even getting a tattoo of the digital coin on his shoulder four months ago, which he posted a photo of on Twitter. In an earlier tweet of his new arm ink, he crowed, “I’m officially a Lunatic!!!”

However, seasoned investors like Warren Buffet have warned that Bitcoin and its digital ilk are a dangerous investment and little more than “a speculative bubble.”

Meanwhile, back on April 14, Hudson River Park Friends announced that Novogratz was stepping own as the group’s board chairperson and would be replaced by Diana Taylor.

Novogratz served as the Friends chairperson from 2013 to 2022, prior to which he was a board member of the Hudson River Park Trust, the state-city authority that is building and operates the 4-mile-long Hudson River Park.

Taylor was chairperson of the Hudson River Park Trust from 2007 to 2021 and was a Trust board member beginning in 1999, when the organization was formed.

“I could not be more proud of the work we accomplished for Hudson River Park and everyone who enjoys it during my nine years at the helm of Hudson River Park Friends,” Novogratz said. “I’ve always been a huge fan of the park and a big park user. But, during the last two years of COVID, it’s hard to express how important it’s been for me and for my whole community. It’s just an incredible asset to have in a stressed-out place like New York City and has an amazing team of dedicated professionals who are committed to keeping it beautiful, clean and green. I could not be happier about having Diana Taylor taking over my role as chair. I know how much she cares about the park and the city, and I couldn’t be leaving Friends in better hands.”

Novogratz personally donated a $1.3 million gift to the Pier 26 Science Play Area in the park’s Tribeca section this past year.

“Mike Novogratz has done a fabulous job as chair for the last nine years, and I will try to fill his shoes as best I can!” Taylor said. “I look forward to working with the community of park supporters to make sure Hudson River Park is the best it can be in serving millions of people and creating a wonderful place to learn, play, exercise and relax by the Hudson River.”

Connie Fishman, executive director of Hudson River Park Friends, thanked Novogratz for his work and expressed confidence that Taylor will grab the baton and carry on the work of the park.

“From securing funding for critical recreational, sustainability and educational programs in the park to expanding volunteer opportunities and building new playgrounds, Hudson River Park Friends is immensely grateful for all that was accomplished under Mike Novogratz’s leadership,” Fishman said. “With the park’s final stages of construction now underway, I am confident that Diana’s tireless advocacy and longtime involvement with Hudson River Park will help us achieve our mission of guaranteeing that the park remains an exceptional public space for all of New York to enjoy.”

Taylor sits on the board of directors of Citigroup and Brookfield Properties and chairs several nonprofit boards, including Accion, Hot Bread Kitchen and the New York City Ballet. She is the longtime girlfriend of former Mayor Mike Bloomberg.

Prior to Fortress, Novogratz spent 11 years at Goldman Sachs, where he became a partner. In recent years, Novogratz has made criminal justice reform the primary focus of his family’s foundation, Galaxy Gives. He serves as the chairperson of The Bail Project, whose stated mission is to “disrupt the money bail system.” He’s also a founding partner of the REFORM Alliance, which aims to “transform probation and parole.” He’s a board member of the Robin Hood Foundation, an anti-poverty organization that provides food relief, housing and workforce development.

In addition to his philanthropy, Novogratz, a former college wrestler, has championed U.S. Olympic wrestling. Locally, his organization Beat the Streets promotes wrestling for middle-school students.

Correction: The original version of this article said Hudson River Park Friends issued a press release on May 14 announcing that Michael Novogratz was steppping down as Friends board chairperson. The press release was issued on April 14.