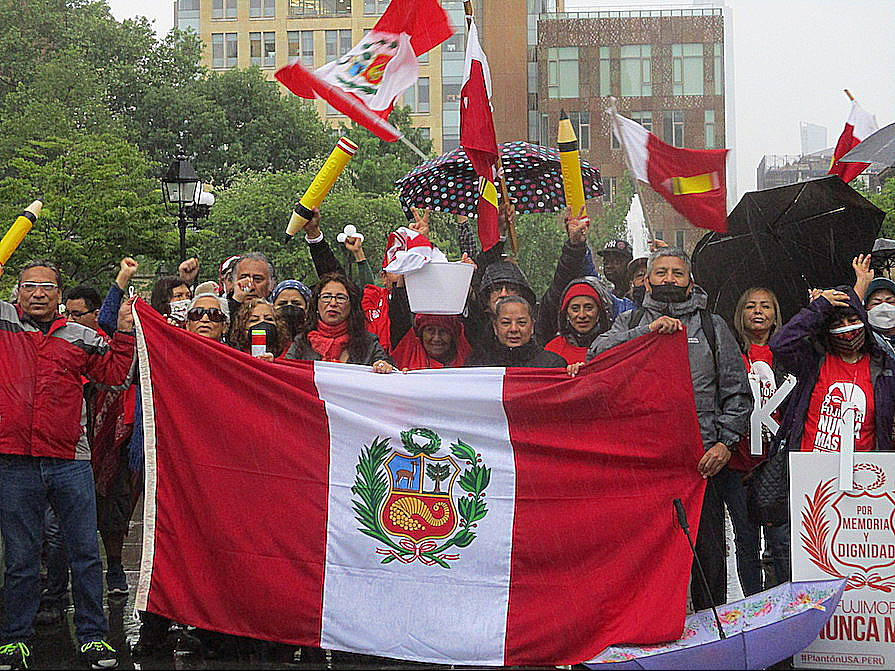 ‘No to Keiko’: Peruvians rally in Washington Square before election

BY BILL WEINBERG | It was a rainy Friday on May 28, when a group of some 100 New York-area Peruvians gathered in the shelter of the Washington Square Arch to bring a message about what they see as an urgent situation in the South American country.

“The rain is appropriate,” said Carlos Bernales, a retired veteran reporter for El Diario-La Prensa, in opening remarks spoken in Spanish through a bullhorn. “Because it can mean a cleansing — and we have to cleanse our country of corruption.”

In the June 6 presidential runoff in Peru, voters will face a choice even more stark than that one in the United States last year.

On one side, Keiko Fujimori — unrepentant daughter of the imprisoned ex-dictator Alberto Fujimori and leader of the country’s hard right. She was herself jailed under “preventative detention” as corruption charges were pending against her last year. But until she’s convicted, she is free to run for president.

On the other side, Pedro Castillo — a populist former schoolteacher and union leader from an Andean peasant community, whose grassroots campaign mobilized the rural hinterland, taking the political elite in Lima by surprise.

There was no doubt which side the crowd at Washington Square was on. The ubiquitous slogans were “Fujimori Nunca Más” (Fujimori Never Again), “Keiko No Va” (Keiko No Way) — and “Se Siente, Se Siente, ¡Castillo Presidente!” (Feel It, Feel It, President Castillo!”

Rally co-organizer Tatiana Bejar, who works with a nonprofit in Manhattan, told The Village Sun their primary message was directed toward the some 50,000 metro-area Peruvians, who have the right to vote in Peru’s election through the consulate.

“We are a group of Peruvians from New York City, New Jersey and Connecticut who are mobilizing to reject the candidacy of Keiko Fujimori,” Bejar said. “We are talking to other Peruvians who are only listening to the dominant narrative from the right wing that is saying Castillo is a communist, that he will make Peru a new Venezuela. There is a defamatory campaign from the media, right-wing parties and the ruling wealthy class that is creating fear about Castillo. They call anyone who follows him a terrorist.”

The terrorist-baiting is certainly ironic in light of the bloody legacy of Alberto Fujimori (whom Keiko openly seeks to pardon). Some signs at the rally made reference to atrocities committed under his regime in the ’90s: the forcible sterilization of thousands of indigenous and peasant women, the death-squad massacres — most notoriously those at the Lima working-class district of Barrios Altos and La Cantuta University. These massacres were part of a reign of terror that was ostensibly unleashed in the name of fighting the Shining Path guerillas, but indiscriminately targeted students, peasants and the poor.

Ydelzon Sánchez, who works as an assistant teacher in the Bronx, is from Cajamarca, the same rural region as Castillo, and claims to have known him in his youth.

“He worked like us in the chacra [farm plot] and corn, he understands the Peruvian reality,” he told the crowd. “From here in New York we say — on June 6, Keiko No Va!”

Sánchez wielded a giant plastic pencil as he spoke; the pencil is the ballot symbol of candidate Castillo — a reference to his schoolteacher roots.

Also speaking was Ana Maria Quispe Piscoya of the Peruvian Organization in Defense of Coca Leaf. A longtime New York-area activist on issues about the land of her birth, she raised the indigenous Inca concept of pachacuti — the time of upheaval. It seemed all too appropriate as Peru is ravaged by COVID-19 (the highest per-capita death toll in the world at 180,000) and a seemingly permanent political crisis that has seen five presidents in as many years, amid relentless corruption scandals.

“We need a transition to the time of peace,” Quispe Piscoya said. “That’s what we all have to work for.”