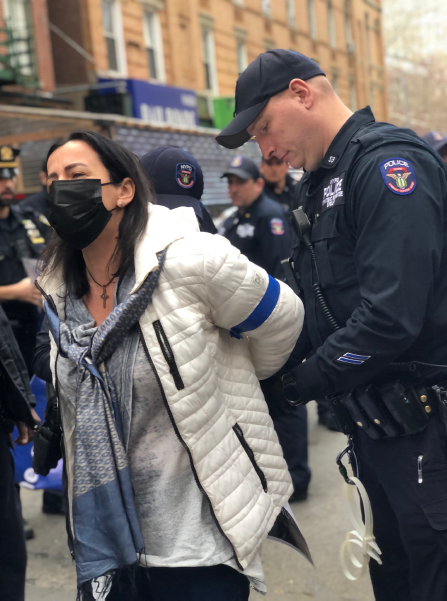 BY DASHIELL ALLEN | Ten people were arrested — including two political candidates — Wednesday morning outside the Manhattan Detention Complex after more than 20 protesters tried to block the start of the site’s demolition.

It was the third day in a row that demonstrators had gathered at the location. The city plans to raze the current jail facility and replace it with a taller version — dubbed a “megajail” by critics.

“Shame! Shame! Shame! Chinatown not for sale! People First! No new Jail!” the activists chanted as flatbed trucks rolled in carrying concrete Jersey barriers, to be placed around the block between Baxter and Centre Streets.

Some protesters took issue with the hard hats for beginning their work earlier than 7 a.m., before which time, according to city rules, they would have been required to “apply for after-hours authorization.”

“Do you have your permits, Gramercy?” asked Jan Lee, a co-founder of the group Neighbors United Below Canal and local property owner. He was referring to Gramercy Group, the company contracted by the city to demolish the complex, which is known informally as The Tombs.

“You started to put the bollards down on the sidewalk,” he shouted. “Do you have any permits for that? Show us your permits!”

Councilmember Christopher Marte, a longtime opponent of the city’s borough-based jails plan, called the start of work “disheartening.” He, along with several activists, called 3-1-1 to question whether the work had started before legal hours.

“We’re going to bring it up with D.O.B. We’re gonna bring it up with D.O.T.,” he said, referring to the Department of Buildings and Department of Transportation. “There’s a reason why we have laws. We have to respect the laws, and Gramercy and the city just broke the law this morning,” he said. “Mr. Mayor, tell your contractors to follow the law. When we asked for permits they didn’t show us anything. Who’s really following the law? Gramercy isn’t.”

One nine-year resident of a tenament building on the opposite side of Baxter Street, who requested anonymity, told The Village Sun she was concerned about how the jail’s deconstruction would affect her directly.

She has a toddler, and she’s concerned about how dust and asbestos might affect them both. She also runs an online business out of her home, she said.

“I’ve been e-mailing the mayor and City Council and all the people involved to perhaps stop it,” she said, “but it seems like it hasn’t actually worked.”

According to the woman, about 80 percent of the tenants in her building are Asian seniors, most of whom weren’t aware the demolition was taking place until just two months ago.

Drivers ferrying in the concrete barriers on flatbed trucks tried to go down Baxter Street. But a group of nine protesters defiantly sat down on the street in their way before eventually being arrested by police.

Among the arrested were two political candidates, Grace Lee, who is running for state Assembly, and Vittoria Fariello, running for state Senator, as well as Evelyn Yang, the wife of former mayoral and presidential candidate Andrew Yang, and Victoria Lee, a Democratic district leader and co-founder of the nonprofit Welcome to Chinatown.

Given the politicos’ choice to participate in civil disobedience, City & State reporter Jeff Coltin suggested on Twitter that “opposing the jail is clearly seen to be helpful politically.”

“Rikers is a place of systemic injustice and needs to be closed,” Grace Lee said in a statement later in the early afternoon. “But a $2 billion megajail that has even fewer beds than the existing structure is not the solution.

“The demolition of the Manhattan Detention Complex and the construction of the new megajail will have an enormous environmental impact,” she said. “Hundreds of toxins and chemicals will be released and contaminate the air that our seniors and our children breathe when the current structure is demolished. There is asbestos in the building, and VOCs, PCBs and heavy metals have been detected in the soil below.

“What happened this morning,” Lee added, “is eerily evocative of a massive protest against the construction of the current structure back in the 1980s.”

“I am so sick and tired of politicians’ empty words talking about stopping Asian hate,” Yang said, addressing the crowd. “People supported [Adams] because of those promises. … Now that he is mayor, where is he? Where is his support of Chinatown now? His exact words: This megajail is ‘institutionalized hate against the people of Chinatown who have already suffered so much.’”

(She was quoting a speech Adams made as a mayoral candidate at a rally in Chinatown against the jail in April of last year.)

Fariello also issued a statement Wednesday afternoon after her arrest.

“Our neighborhoods don’t need a bigger jail,” she said. “We need more schools and more housing, and I’ll do what is necessary to win this goal.” She added, “I call on Mayor Adams to keep his promise and stop construction on the jail immediately.”

Fariello also thanked the 7th Precinct police officers “for their professionalism” in dealing with the protesters and the arrests.

On Monday, a mayoral spokesperson told The Village Sun in a statement, “This administration will always follow the law, and the law says the jails on Rikers Island must close on time. To follow the law and protect the safety of the community and all involved in this project, this work is proceeding. We have engaged deeply with the community every step of the way, and we are committed to continuing to work with them to limit the disruption of this project.”

The Mayor’s Office did not issue a statement when asked about the work starting early on Wednesday. However, due to the presence of the protesters, the decision was reportedly made to start “a few minutes before 7 a.m.”