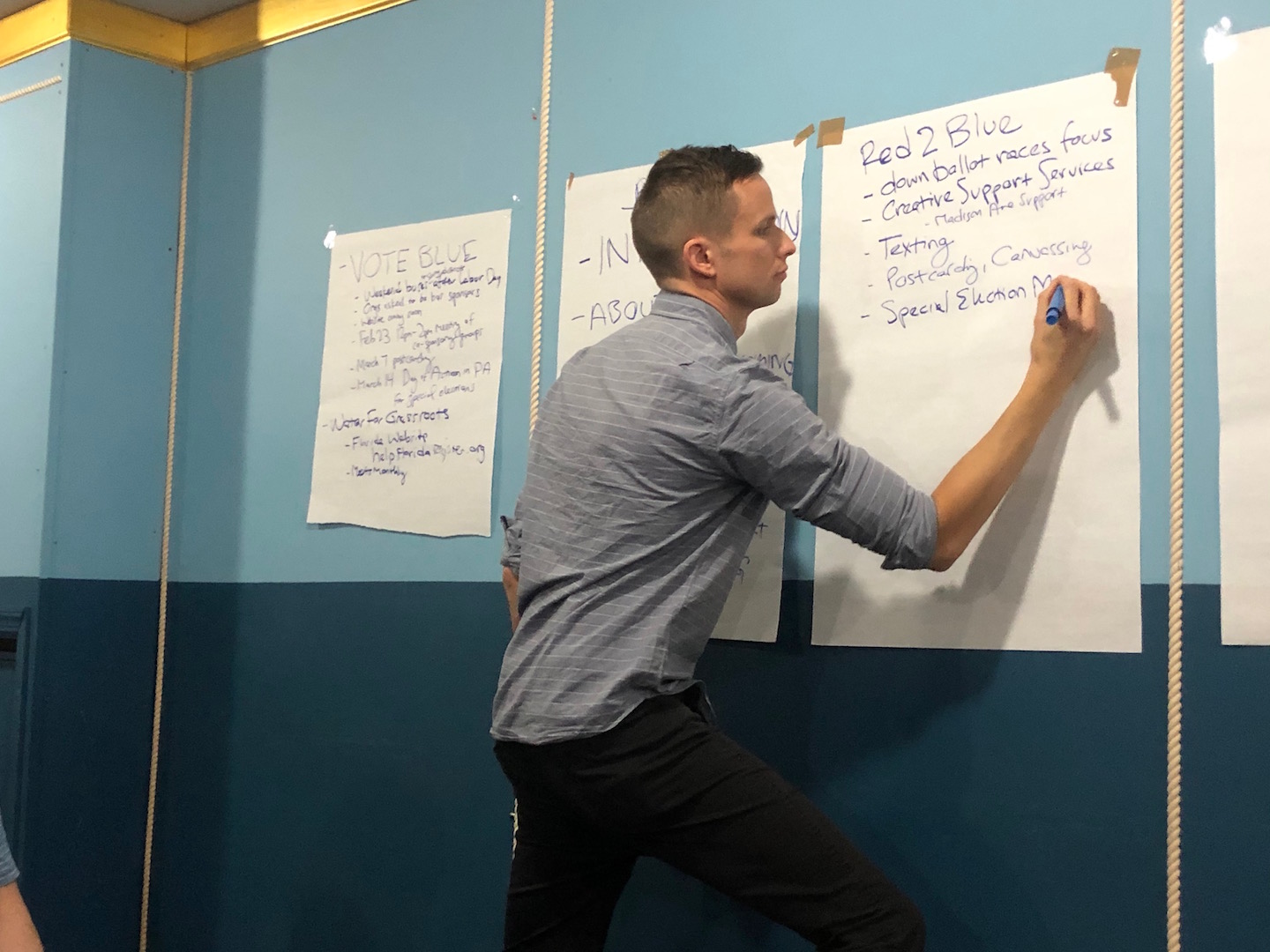 BY EDWARD YUTKOWITZ | It was the day after the presidential election in 2016, and New Yorkers were in despair. An unimaginable nightmare had become a reality.

But a group of intrepid political activists immediately saw the election results as a call to arms. To avoid dwelling in despair, they decided to channel their energy and develop ways to organize for the 2018 election cycle.

Out of such concern was born United Thru Action, a network of groups committed to sharing and promoting ideas and activities to elect progressive Democrats in New York City, and in swing districts on Long Island and in Upstate New York, New Jersey and Pennsylvania.

Since 2016, UTA’s monthly meetings have brought together a wide range of political organizations from across New York City to discuss and implement strategies to get voters to the polls and generate enthusiasm for Democratic candidates, not only in New York City but in surrounding areas. With the support of some of New York City’s leading political figures, including City Council Speaker Corey Johnson, the group has provided ordinary New Yorkers opportunities to make a difference in “swing” areas that don’t have a strong Democratic or progressive presence.

The group has enjoyed extraordinary success since its inception. As part of 2018’s national Blue Wave, the group promoted voter registration, canvassing, phone banks, and post-carding events and activities that helped swing a number of congressional districts from Republican to Democrat. It was instrumental in the demise of the Independent Democratic Conference (I.D.C.), a group of Democrats in the New York State Senate that took the Republican side in opposing Democratic legislation.

Building on that momentum, UTA’s first meeting of 2020, at the Church of the Village, at 201 W. 13th St., drew more than 80 participants, including Assemblymember Dick Gottfried. While most of the political clubs represented at the meeting, including Village Independent Democrats, Hell’s Kitchen Democrats, Downtown Independent Democrats and Chelsea Reform Democrats, are based in Manhattan, there were also representatives from Brooklyn and Queens clubs. A number of independent progressive organizations were also represented, including True Blue NY, Rise and Resist and Make the Road NY.

The participants represent a wide variety of political views and priorities, which might be described as New York City’s democratic (small “d”) “resistance” to Donald Trump and his cruel and corrupt policies and practices. While they may not agree on everything, they are united in a common cause: to increase voter turnout for Democratic candidates and defeat Donald Trump and the Republicans.

Moderated by Erik Bottcher, chief of staff to Council Speaker Johnson, the group set to work brainstorming and outlining ideas for the coming year.

Representatives from New York BudgetJustice.com emphasized the importance of continuing to work for progressive legislators and reforms in New York State. They noted that New York is one of the wealthiest states in the nation, yet income inequality is also among the greatest here. They urged participants to pressure Governor Cuomo and legislators to make sure that the state’s upcoming budget reflects progressive priorities and addresses the needs of lower-income New Yorkers.

But most of the organizations at the meeting focused on motivating New Yorkers to get involved in local activities that help progressive groups, like Swing Left, to get out the Democratic vote in communities outside the city. These activities include regular post-carding, carpooling and text-banking events, which have been effective in turning out Democratic voters.

Brooklyn-based Water the Roots, which operates under the auspices of GetOrganizedBK.org, is helping to register voters in Pennsylvania and Florida, among other places. Its representatives urged attendees with friends and relatives in Florida, for example, to direct them to HelpFloridaRegister.org.

Other groups are already visiting swing districts. For example, Changing the Conversation organizes carpools of volunteers to Bucks County, Pennsylvania, a crucial swing district, to engage in “deep canvassing” that engages voters in conversation to try to bridge ideological divides.

On Feb. 15 and 16, Red2Blue and Turn PA Blue are organizing carpools to Bensalem, Pennsylvania, to help turn out voters for a special election of Congressional District 18 on March 17. Potential participants can learn more at info@red2blue.org. 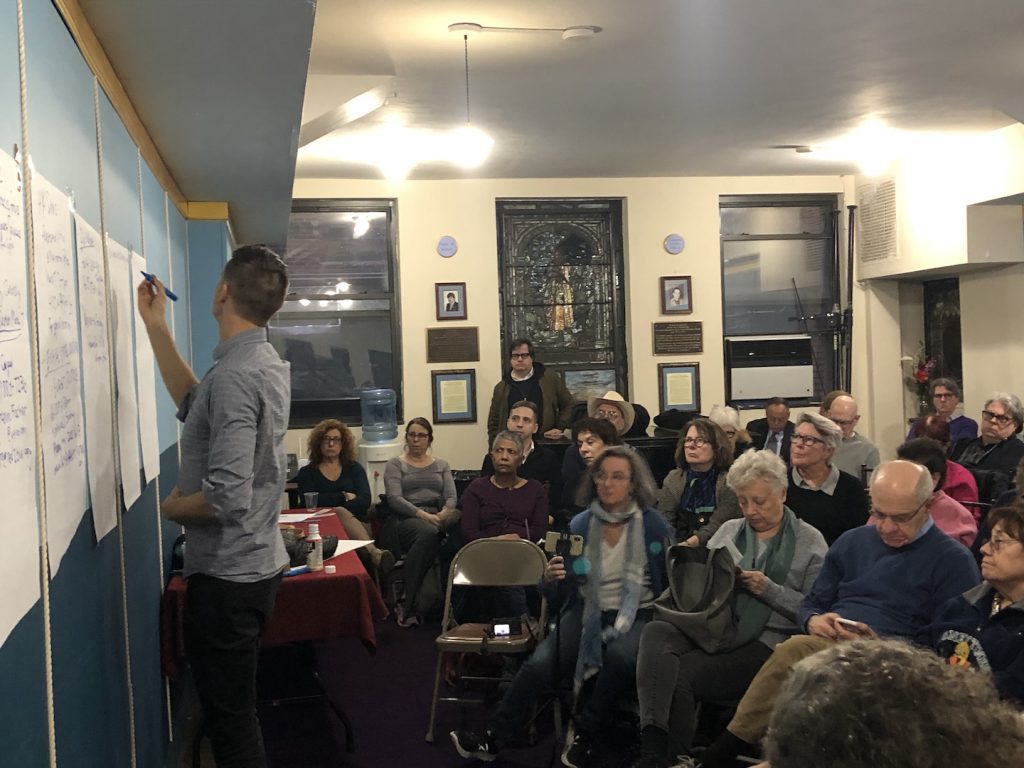 In 2016 and 2018, Vote Blue sponsored more than 30 buses and hundreds of volunteers who went door-to-door to encourage Democrats to vote for Democratic candidates, and helped swing six congressional districts from red to blue.

The initiative seeks to do the same this year. As campaign season heats up after Labor Day, Vote Blue will send volunteers to canvass — go door-to-door — for Democratic legislative and congressional candidates Upstate, on Long Island and in New Jersey and Pennsylvania. The effort will focus on reelecting Anthony Delgado, in District 19, in New York’s Hudson Valley, and Andy Kim, in New Jersey’s Third Congressional District. And, of course, Vote Blue will work tirelessly to elect the Democratic candidate for president.

Republicans are engaged in a massive disinformation campaign led by a vengeful, ruthless and emboldened president. Only a sustained, concerted effort can defeat him. UTA welcomes New Yorkers to share their ideas and ideals and get involved. The United Thru Action Facebook page provides a calendar of upcoming events and information on all of UTA’s efforts.

UTA’s first meeting was just the opening in what will be a challenging year. All of the participants know that November is a long way off and that restoring majority rule and regaining political power won’t be easy. But everyone shared a sense of purpose and direction, and returned to their respective organizations energized and ready for action.

As Erik Bottcher put it, “New Yorkers are going to make 2020 the worst year of Donald Trump’s life!”