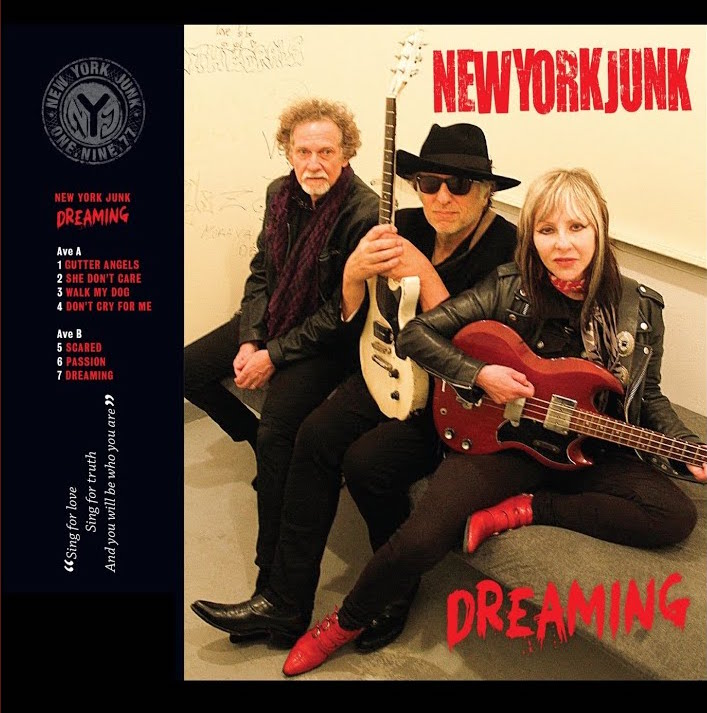 New York Junk are back with a new album rooted in the spirit of Downtown rock.

BY JOHN PIETARO | Rock-n-roll is universal, though it was conceived by the convergence of African American blues via “reeling and rocking” church traditions with the largely rural white edge of western swing and rockabilly.

With all of the attention to the music’s southern roots and branches, there may be question as to how it ended up in New York City in time to birth the punk movement. But this East Coast urban rock tradition is vital.

In the period between the Velvet Underground’s proto-punk assault on the music industry and Hilly Krystal agreeing to feature Television on his CBGB stage (or actually build it, as legend goes), something revolutionary was happening Downtown.

With the city in the throes of bankruptcy and the Lower East Side riddled with abandonment, the angry and dejected sought a music to match their emotions, to tell their story. This was realized in the stripped-down, razor sharpness of punk rock and its many offshoots.

The individual members of New York Junk bared witness to the heyday of this revolution in sound. Leader, guitarist/vocalist Joe Sztabnik was a member of the Dragons, an early CBs act. He also worked closely with Dee Dee Ramone, co-writing songs with Dee Dee for the Ramones member’s solo career, which was cut painfully short.

Canadian bassist and poet Cynthia Ross — a founder in 1977 of the B-Girls, who toured with Blondie, The Clash, The Ramones, Mink DeVille, Robert Gordon and The Dead Boys — also worked with Stzabnik in the mid-1980s. In 2008 they joined forces again to found, with veteran drummer Gary Barnett, New York Junk. A trio of survivors, one might say.

The band’s first three albums, powerful statements of pre-gentrified Downtown, also included Brit guitarist Jeff Ward, known on both shores as a musician (Gunfire Dance) and author. They toured not only in the U.S. but developed a large following in Prague, gaining European airplay and press, spreading caustic Downtown gospel inside the former Eastern Bloc.

“Dreaming,” the latest release by New York Junk, is a seven-song E.P. which only magnifies the urgency. The band’s return to its original trio format allows for more space and rawness. Calling on what noir novelist Cornell Woolrich referred to as “the deep of night, the dregs, the sediment at the bottom of the coffee cup. The blue hour,” New York Junk’s music is like a blast of shrapnel.

The E.P. leads off with the gripping “Gutter Angels,” a Stzabnik song built on a lyric by another Downtown original, Puma Perl. This is a bitter anthem of the sad resurgence of homelessness on our streets, the poverty in our paths, as well as the sad legacy of the same dating back decades. Stzabnik sings in a torn vocal style, tapping into Johnny Thunders’s sound with the ease of familiarity.

Gutter angels up in heaven

Looking down on us all

Bless the sidewalks where they fall.

Haunting stuff. Perl’s poetics are a minefield of realization in the current state of uncertainty and division. While the rest of the album maintains the band’s core strengths, this track is so gripping, it would have been the preferable title track. The back-cover photo of a darkened alley only magnifies the point.

Other highlights include “Scared,” a throbbing rocker, relentless in energy and output, and “Passion,” which Stzabnik originally wrote to a lyric by Dee Dee Ramone during their partnership. Here, “Passion” is reworked to recall The Kinks at their grittiest. The band must be chomping at the bit to take this music out live, since its sound was birthed in those noisy Downtown barrooms…visceral, the sediment of our city.

Nothing’s changed since you’ve been dead

Except you feel your body aching

Gutter Angels up in heaven

Looking down upon us all.

Bless the sidewalks where they fall