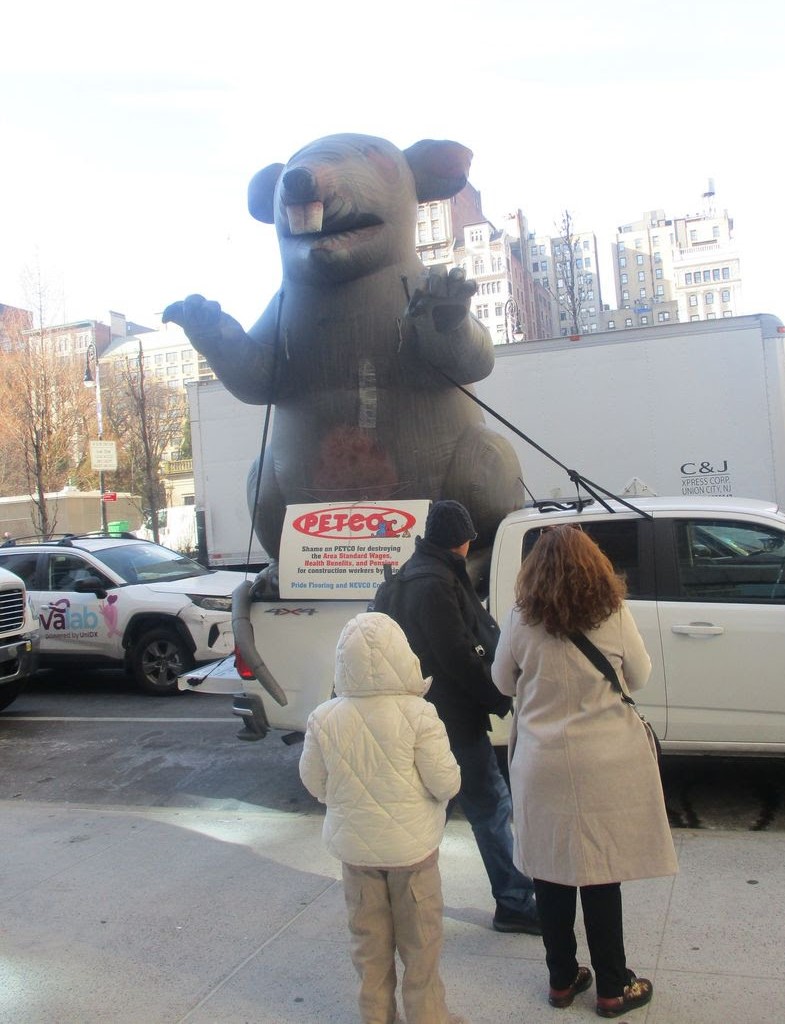 The union rat is making a stand outside the new Petco store currently being built out at 17th Street and Union Square East. (Photo by Mary Reinholz)

BY MARY REINHOLZ | Petco’s flagship New York store has yet to relocate into the historic Tammany Hall building at 44 Union Square East, despite its corporate parent signing a lease last April and a “cake-cutting” party heralding the impending move to three floors a few months ago, said a manager at the current store at 860 Broadway. The Petco is also supposed to include a pet hospital.

The manager declined to comment on the delay or why the storied “union rat,” known as Scabby, was now standing outside the landmarked Tammany building, a towering symbol of protest against nonunion labor still at work renovating the site. It’s been there for the past month.

“Shame on Petco and Schimenti for contributing to the erosion of area standards for New York City Carpenters by allowing Nevco to work on their jobs,” read one of the pamphlets from the 20,000-member-strong New York City District Council of Carpenters, referring to the San Diego-based pet supply chain; its contractor, Schimenti Construction; and Nevco, its subcontractor.

A Schimenti boss, on the second floor of the building, stated, “We don’t have anything to say,” according to a guard, who walked  up to get his comment because the elevators still aren’t working and The Village Sun was not permitted to join her. Construction workers in flooring and other specialties walked by, most of them in their 20s.

“They get low pay and no benefits,” said Peter Brereton, a representative and member of the New York City Carpenters Union Local 2287. He noted that it’s not illegal to have a nonunion shop, but faulted Petco for “requiring nonunion labor” when it signed up with Schimenti.

Brereton said he is still in talks with Schimenti and the Canadian Pension Plan, one of Petco’s owners. Petco has been valued at $4.6 billion.

Representatives for Petco and Reading International, which owns Tammany Hall, did not respond to  calls for information.

Tammany Hall was once the scene of labor gatherings. Margaret Cotter, Reading’s executive vice president of her family-run firm and head of it real estate division and the subsidiary, Reading Tammany Owner, LLC,  purchased the building in 2001 from Local 91 of the Ladies Garment Workers Union. That union had owned Tammany Hall since 1943.