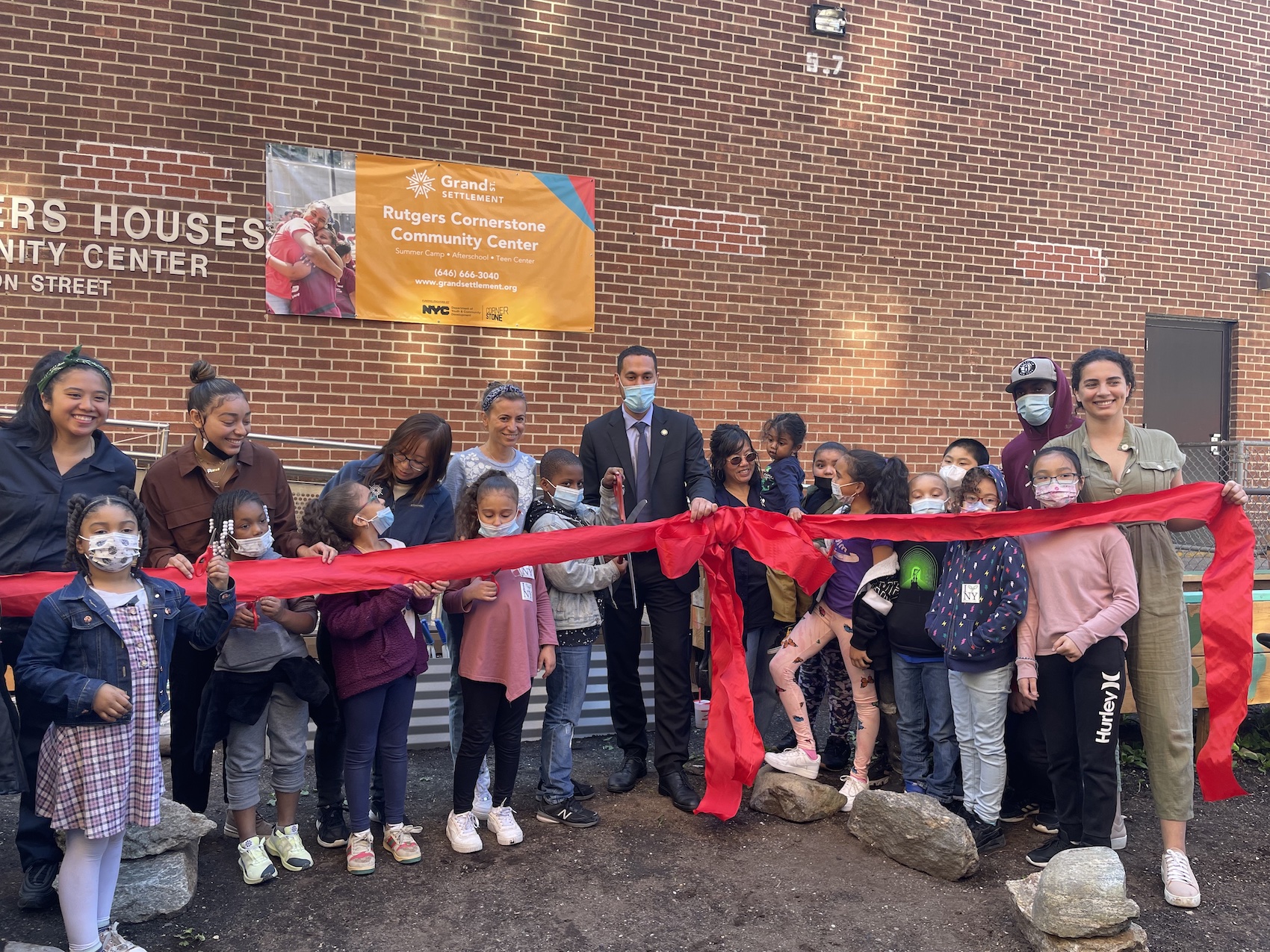 BY DASHIELL ALLEN | On Monday, community members celebrated the opening of a new community garden in partnership with Grand Street Settlement that has the aim of educating Lower East Side kids about healthy and ecologically sustainable food practices.

The product of six months of hard work and planning, this is the first garden opened by Chefs for Impact, a new nonprofit that aims to raise awareness around food sustainability through school and adult education programs.

“We get to make stuff that we’ve never made before and we get to eat it,” declared one 7-year-old.

“Before Chefs for Impact came in here, all we had were four crates that were pretty much broken and [useless],” said Amy Huang, the program director at Rutgers Community Center from Grand Street Settlement.

“Rodents could get inside [the old planters], and we don’t want the kids around anything like that,” she said. “So when Chefs for Impact offered to work on this garden and make it into something that is kids-friendly and brand new, we jumped at the chance for it. There was no reason for us to say no to it.”

“More than ever after COVID, kids want to be part of something, creating something from beginning to end,” said Thahn Bui, the managing director for youth and community development at the Rutgers center.

Located on a small plot of land owned by the New York Housing Authority, the garden holds six brightly painted planters, elevated a few feet off the ground as a deterrence to rats. Already, the first crop — strawberries — is beginning to peek out of the soil.

“I don’t know what’s more impressive — building this beautiful garden, or getting NYCHA to allow you to do this in such few months,” Councilmember Christopher Marte quipped. “It’s really miracle work.”

“Grand Street never ceases to amaze us, every program, every event,” said Amy Vera, representing Assemblymember Yuh-Line Niou, who provided a citation in honor of the occasion.

Founded two years ago at the start of the pandemic, Chefs for Impact works to “inspire consciousness and change,” according to Olivia Chessé, the program’s founder. Chessé has more than 15 years working in the food and hospitality industries in France, China and the United States.

“I grew up in the countryside of France,” she told The Village Sun. “So, for me, farms and seasonality of fruits and vegetables is very genuine, like what’s in season.

“When I moved to the U.S. I realized the food education is very poor if not nonexistent in U.S. schools,” she said, adding that she is a mother of four. “I realized there was an obvious need; change is taught at a young age.”

The nonprofit’s youth education programs reach an estimated 600 kids at five community centers and schools. By next fall, they hope to increase that number to 1,500. The Lower East Side garden will serve 100 students through afterschool programs, many of whom live in Rutgers Houses and the nearby area.

Many of the communities Chefs for Impact serves, including in Lower Manhattan, have experienced heightened levels of food insecurity — one of the problems they’re hoping the programs based around the garden can address.

“Our goal is not to just give away a bunch of food, but how do you cook it and what do you do with it after?” said Kristina Ramos, the chief chef and educator.

“I come from a background of fine dining,” she noted. “So I take what I’ve learned traveling the world and bring it to the curriculum in a friendly way. It’s a lot of focusing on seasonal products where we can cook together step by step and teach these kids better skills to use produce.”

After the press conference and photo-ops, this writer got to sample one of the creations of chef Marcia Sanchez of Preserving Harvest Catering — a wonderfully mouthwatering piece of carrot, perfectly seasoned, on top of what appeared to be a cross between an aioli and pesto sauce. No wonder the kids were so excited to get cooking!