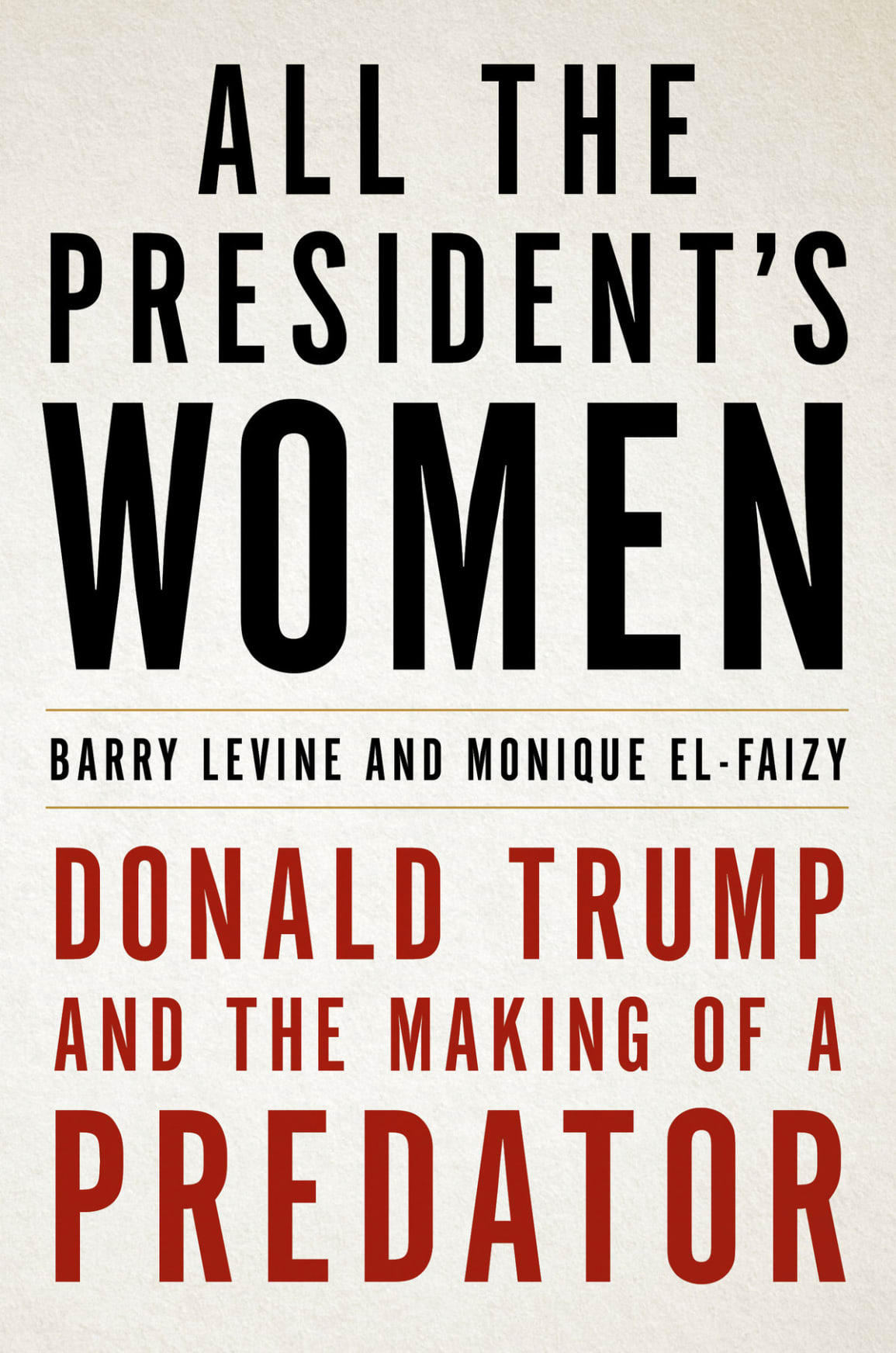 BY JACK BROWN | “All The President’s Women: Donald Trump and the Making of a Predator,” by Barry Levine and Monique El-Faizy, is a deep dive into the sordid sociopathy of the current occupant of the Oval Office.

Published by Hachette Books, with “behind-the-scenes interviews and never-before-seen photos,” and clocking in at a hefty 384 pages, the book was released last month.

A prior occupant of said office, William J. Clinton, left his own stain on the dress of Monica Lewinski and the dignity of the presidency.

Both Trump and Clinton partook of the hospitality of convicted pedophile financier Jeffrey Epstein, now deceased. It seems they all enjoyed the company of women “on the young side.”

Trump’s father Fred, son of German immigrants, was a hard-driving aloof real estate developer. Trump the elder made his money building low-income housing in Queens and Brooklyn. He told Donald you can have as many mistresses as you want, “just don’t get caught.”

Young Trump was described by childhood friend Peter Brant as having been a good baseball and soccer player, also something of a bully. As a reward for standing up to his father Fred, at the age of 13 Trump was shipped off to the New York Military Academy. It was construed as parental rejection.

Yet Trump seemed to thrive amidst the strong-arm culture, as well as the airbrushed fantasy of Hugh Hefner’s six-year-old Playboy magazine. Biographer DC Johnston said, “Donald has been living the year he was 13 for the next 60 years.”

Donald Trump’s mother Mary was an immigrant from the Scottish Hebrides Islands. She worked as a maid for the Carnegie family. There she developed a taste for luxury.

Other than Mary’s bearing children, Trump praises her for being silent and supportive.

She was of little maternal influence.

Trump bears the characteristics of “attachment avoidance.” Someone who has difficulty trusting and forming stable relationships. Mother Mary is quoted as saying, “What kind of son have I created?”

Father Fred  seems to have imported young women to New York Military Academy so that young Trump would be seen with “arm candy.” Donald was soon recognized as a ladies man.

A lesson in PR. Stoking the Playboy fixation.

After two years at Fordham, Trump landed at the University of Pennsylvania Wharton School of Business. He pursued Miss U. Penn 1963, Candace Bergen.

Beautiful with a famous father, she was bored and agreed to a date. Trump arrived, all ostentation. Burgundy suit. Burgundy boots. Burgundy limousine. Bergen’s verdict?

Nonetheless, Trump boasts about his wild sexual time in Philadelphia.

After college, Trump returned to New York to work with his father in real estate.

Trump Sr. built Section 8 housing in Queens and Brooklyn. But Donald had eyes for Manhattan. He was thrilled to find a nondescript pad on Third Ave. From that lair he hit the East Side hot spots, where glitz and glamor, models and actresses could be found.

He was particularly keen to become a member of Le Club, a private bar where “rich 75-year-old men could be seen with three Swedish blondes.”

Trump persisted and finally cut a deal where he was granted membership with the caveat that he would leave the members’ wives alone.

It was at Le Club where he met legal viper Roy Cohn. According to gossip columnist, Liz Smith it was to the gay Cohn that Trump “lost his moral compass.” An unholy Bronx-Queens alliance in Manhattan.

Cohn provided an intellectual and legal amoral rigor. It was Cohn who polished the sociopathic Trump apple. Facts were fungible. Attack without mercy. Always claim victory.

Cohn fancied hanging out with the tall blond lothario. Cohn called Trump his “best friend.” Inevitably, it was Cohn who was jilted and said of Trump, “Donald pisses ice water.”

Trump was seen crying. Whether it was because of the loss of his legal executioner or his exclusion from the ceremonial spotlight is not known.

It was at the latter, according to the authors, that Trump was observed by “Tino,” a mob associate, engaging in a threeway with his regular, “Tri,” and a girl who may have been underage. Trump was known as “the real estate guy.”

“Kasowitz has gotten Trump out of all kinds of jams. Kasowitz on the campaign — what did we have a hundred women? Kasowitz took care of them all.”

McDougal seems to have seen a warm and fuzzy side of the predator. She recalls an active sexual relationship.

Stormy Daniels has the knack of gaining both the respect of Trump and myriad angry women whom she encounters:

“You get that orange turd.”

Penthouse’s May/June 2018 issue quotes Daniels from her 2018 book “Full Disclosures”: “I’m fine with women saying, ‘You’ve inspired me.’ That’s great. But I’m quick to point out that’s not my story. I suck dick for a living.”

Daniels met with Trump at the Beverly Hill Hotel to discuss appearing on “The Apprentice.” Though it appears she taught him a thing or two. Trump came out waving a magazine with his picture on the cover and bloviating about himself.

Stormy took umbrage and took control. She told him, “Drop ’em.” Swatted him on his posterior with said mag. Then he calmed down.

The voting bloc that likely threw the 2016 election to Trump was white evangelical women. Despite Trump’s flagrantly anti-Christian behavior and crass anti-woman pathology, they finally decided he was preferable to Hillary Clinton.

Progressive secularism. They realized that Mitch McConnell’s savaging of the Supreme Court nomination of Merrick Garland would be redressed with a vengeance by Hillary with numerous court appointments. The key issue became the courts.

They held their noses and voted Trump. In the Trump way, he used them and they used him. Feeding his base, Trump has been packing the courts from Gorsuch and Kavanaugh on down with conservative anti-abortion judges.

Conversely, Trump’s election and the nomination of Kavanaugh inflamed Democratic women. They have mobilized like never before, running for and winning races in the 2018 midterm elections, from Congress to the state and local level.

Trump claims not to be a racist. He talks the talk and walks the walk — at least when it comes to fetching biracial models. Prior to marrying Melania Knauss, he dated both Kara Young and Maureen Gallagher, getting serious about Young.

However, it is Gallagher who provides a most resonant bon mot. Clearly, Trump, a sociopath, has run roughshod over the hearts, minds and bodies of a vast legion of women.

It is likely a large silent majority remain in the shadows. In the fast-lane sexual crucible between womb time and tomb time, Gallagher says, “If you can’t get down with the get down — stay home.”

That said, Trump is unfit for elected office. May the force be with women in 2020.