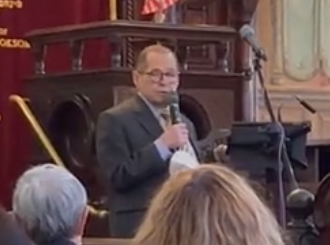 BY THE VILLAGE SUN | Speaking at new City Councilmember Christopher Marte’s inauguration Sunday afternoon, Congressmember Jerrold Nadler said the diverse crowd showed “what broad support he has in the community.”

Mad love for our @ChrisMarteNYC inauguration from @JerryNadler

He sees what we see—a leader for the people. pic.twitter.com/BCmED8kh9L

“And you don’t get that kind of broad support unless you served it and unless people have seen it,” Nadler said.