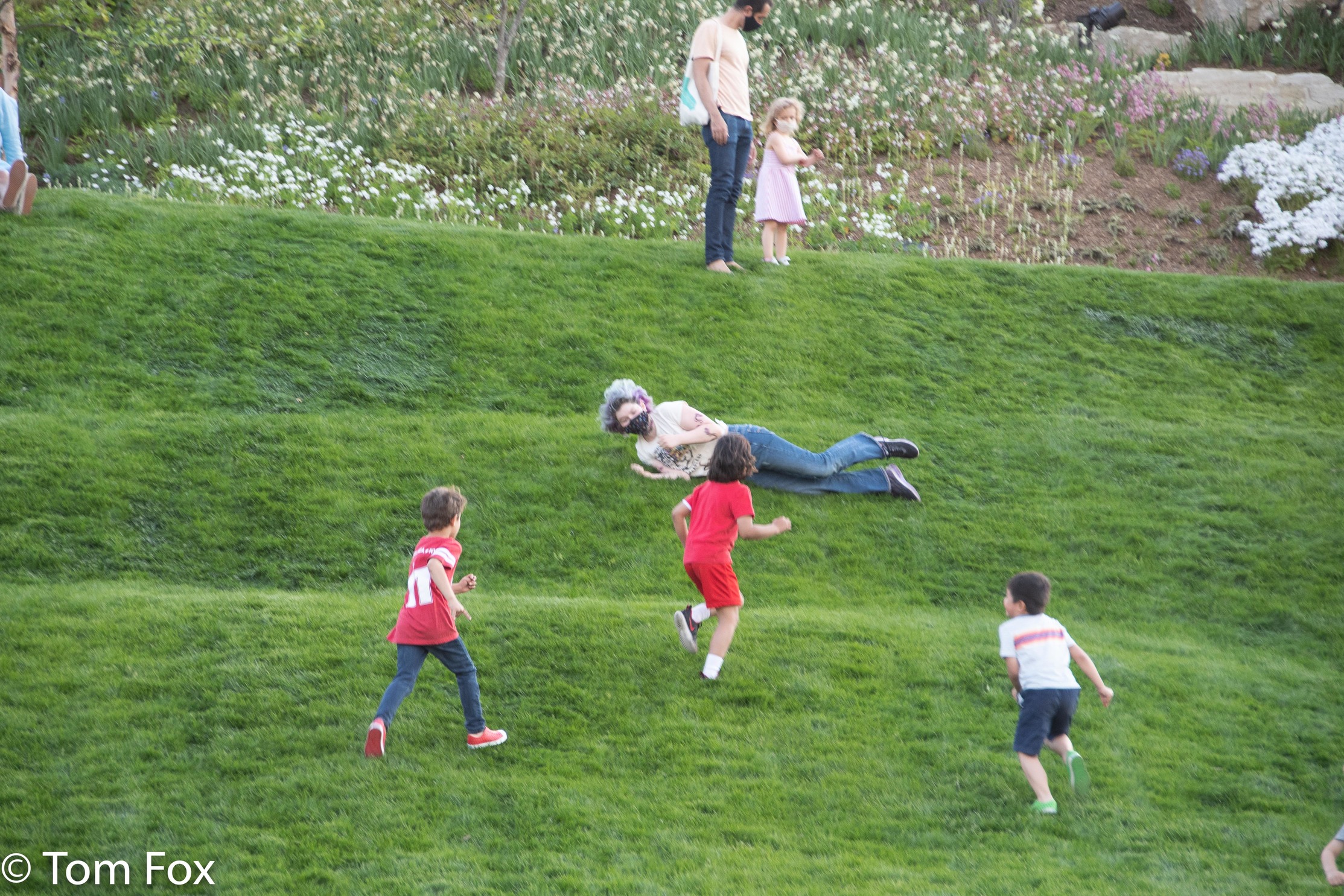 A woman rolling down the big hill on Little Island, a popular activity on the new pier. (Photo by Tom Fox)

My visit to Little Island

BY TOM FOX | In late May, I visited Little Island on community opening day as a guest of Mary Habstritt, the executive director of the historic Coast Guard steam buoy tender Lilac berthed at Pier 25 in Tribeca.

Everyone seemed to really enjoy themselves at the event. Children, and adults, rolled down the pier’s grassy hills and picnicked. Visitors ate in the food court, wandered the undulating paths and enjoyed breathtaking views.

The pier’s landscape is magnificent and the structure itself an interesting engineering feat. The use of guy-wires to support climbing plants that will cover the exposed interlocking sheets of structural steel is ingenious.

However, this is not a water-dependent use of the Hudson River — it’s a gaggle of theaters in an estuarine sanctuary. Little Island is a symbol of contemporary noblesse oblige, with tech the new railroads or steel mills, that facilitate the accumulation of enormous wealth. Just $260 million down, and $120 million over 20 years, allowed the patron to determine the design and use of a quasi-public space in the Hudson River, blocks from his corporate headquarters.

Excellent public relations created significant media hype that undoubtedly satisfied the patron’s ego. However, gawking crowds taking selfies make Little Island feel less like a “public” space and more like a museum. Visitation is limited to timed reservations that are screened before entry until Sept. 30. Perhaps that will change over time.

There are prohibitions against dogs (except service dogs) and even having a bike. The initial lack of nearby bicycle racks inconvenienced several opening-event attendees and did not enhance the “public park” experience.

Little Island is not a “new park,” as the media reports suggest, and it’s certainly not “floating” on the Hudson. It’s a new attraction in an already magnificent public park, which is inappropriately placed in the Hudson estuary.

The most frequent word used in press articles describing Little Island has been “whimsical.” I agree completely. The place is whimsical indeed, i.e. “acting or behaving in a capricious manner.” Little Island seems to bring a High Line mentality, with its monitored, manicured space to the Hudson River Park. However, they are two very different park experiences and should remain as such.

The Little Island Web site lists a staff of 128 people responsible for the programming, operation and management of this 2.4-acre facility. That’s 53 staff per acre — far beyond anything imaginable, or appropriate, for the Hudson River Park Trust or any other public entity to shoulder after The Diller-von Furstenberg Family Foundation largesse ends in 20 years. The staff breakdown is as follows:

I’ve had the pleasure of working with Michael Wiggins, an executive staff member who directs engagement and education for Little Island and is a fellow member on the H.R.P.T. Advisory Council. He is an energetic and genuine individual who speaks passionately about implementing Little Island’s education programs, especially those fostering equity, diversity and inclusion, which is very important in the Hudson River Park, and on Little Island. I believe that those initiatives can add much to the public nature, usability and relevance of Little Island. However, his department is Little Island’s smallest, by far.

It will be interesting to see how the facility functions during concerts and large public events. The food offerings seem limited as do the toilet facilities. For some reason, I envision those wide gangways leading to the “island” filled with food trucks and portable toilets during major events, but I could be wrong.

Leaving the old piles of Piers 54 and 56 intact, on either side of the structure — exposed at low tide, yet just below the waterline at high tide — has created a barrier on the water. To some, I’m sure the pile fields seem artistic and are mimicked by the design of the rusting steel poles surrounding the perimeter of the island. That fencing will presumably prevent people, but not windblown trash, from tumbling into the waterway.

However, those remnant pile fields prevent kayakers, rowers and other boaters from approaching the structure. Someone might take the opportunity to enjoy a paid performance for free. The wooden piles enhance the aquatic habitat but should have been cut well below the surface at low tide. That could maintain their value as habitat and created a more open, navigable waterway for the thousands of human-powered boaters who flock to the boathouses in the Hudson River Park. Fortunately, the Trust can easily remedy that situation without affecting the pier structure itself.

The City Club of New York, Rob Buchanan and I compromised with Governor Cuomo when a federal judge revoked the project permit after determining H.R.P.T. and Little Island had a flawed environmental review. Although they modified their permit application, Barry Diller abandoned the project, convinced that litigation would continue. We ultimately agreed not to litigate and allowed H.R.P.T. and Barry Diller to proceed after the governor intervened and committed to complete the entire Hudson River Park and protect the estuary from further incursions. Andrew Cuomo has kept his word.

The resulting $146 million in new state and city funding in the FY ’19 and ’20 budgets will almost complete the Hudson River Park. The removal of the N.Y.P.D. tow pound from Pier 76, a $30 million commitment to estuary and oyster restoration and the release of the draft Estuarine Sanctuary Plan, which is currently undergoing public review after years of delay, show Cuomo’s commitment is real and the results tangible.

This saga could end well if H.R.P.T. follows the suggestion of Fred A. Bernstein of Architectural Record. In 20 years, the Trust will not be able to afford to maintain this unique structure. Little Island will have been buffeted by the salt, winds and waves, and the landscape will outgrow its “pots,” as does your typical houseplant. H.R.P.T. would be wise to return those few acres to nature after the patron’s largesse sunsets in 2041.

Fox was the first president of the Hudson River Park Conservancy, which completed the general project plan and environmental review for the park. He serves on the Hudson River Park Trust Advisory Council and the board of the City Club of New York, the latter which successfully litigated to stop the Little Island project, which was then called Pier55, Inc.