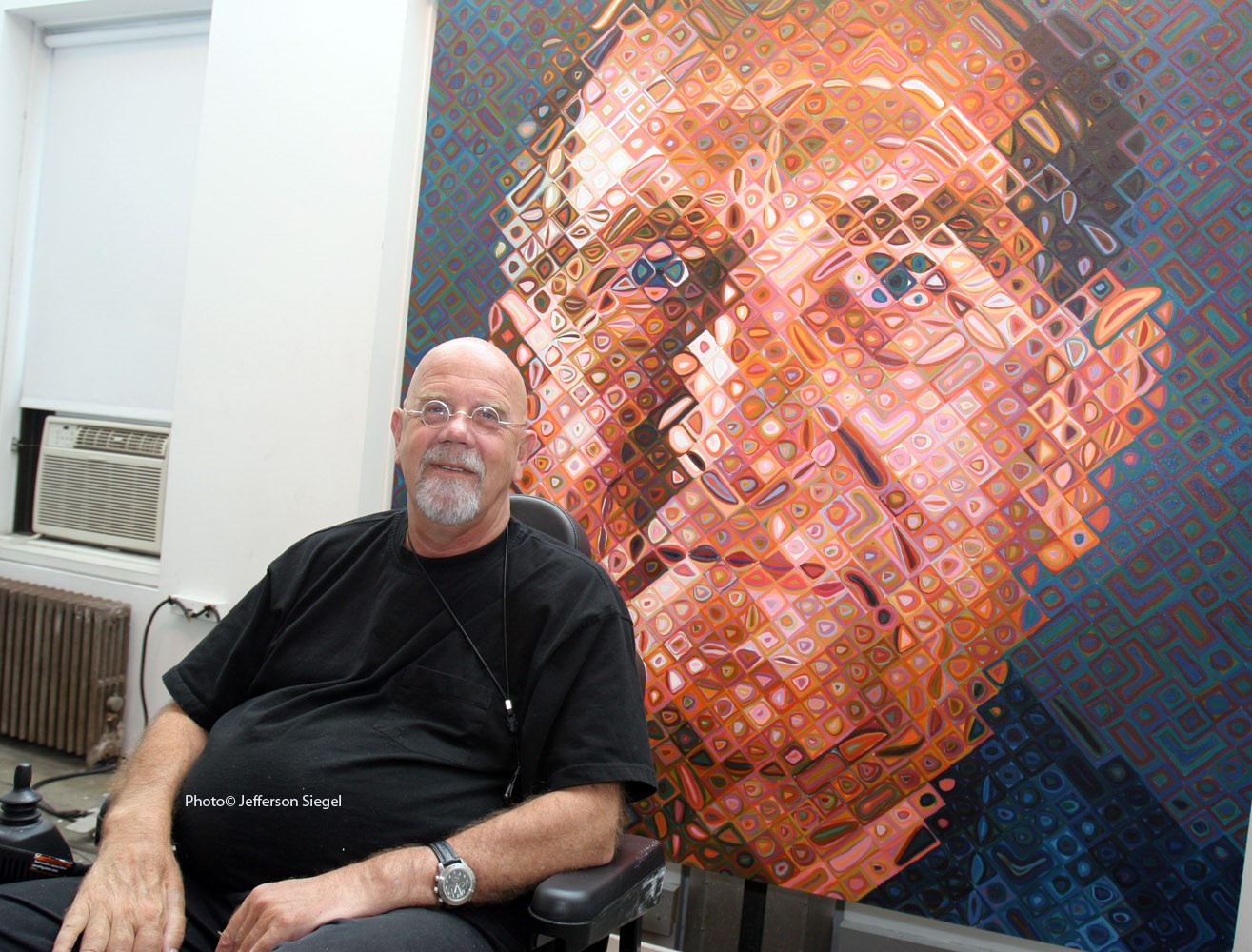 Artist Chuck Close in his Bond St. studio with a portrait he was working on on July 11, 2006. He usually painted friends, family members and fellow artists. (Photo by © Jefferson Siegel)

BY LINCOLN ANDERSON | Updated Aug. 23, 3:00 p.m.: Chuck Close, the Downtown artist renowned for his gigantic Photorealist paintings, died on Thurs., Aug. 19, at a hospital in Oceanside, near his home in Long Beach, Long Island, The New York Times reported. He was 81.

The cause of death was given as heart failure.

After his initial pure Photorealist work, Close later developed a new technique. He would transfer a photo to the canvas, put a grid over it, and then fill in the “cells” in the portraits with various small shapes in hues that, when taken together from a distance, made sense. As for his fixation with faces, Close figured it was, ironically, probably because he actually had difficulty with facial recognition.

In 1988, Close suffered a collapsed spinal artery, which caused partial paralysis. Although he regained some use of his upper body, he was afterward confined to a wheelchair.

In 2013, he was diagnosed with Alzheimer’s disease.

In July 2006, Chuck Close called me on the telephone because he was having a problem involving his studio.

This was back just before the explosion of online news outlets and blogs, and I was the editor of the Village area’s main print newspaper. So Chuck Close personally reached out. He invited me over.

His studio was at Bond and Lafayette Sts. and he also lived in Noho. Curbed reported a few years ago that his studio was at Great Jones St., one block north, and that he lived at Bond St., but I just remember entering the studio via Bond St.

Basically, a developer was planning to construct a large building in a through lot adjacent to the building in which Close had his studio on the ground floor. This was going to block or reduce Close’s natural light from his window or windows on the eastern and, I think, also northern sides of his studio. There may have been a high window or skylight on the northern side above his painting area also at risk of being impacted, I’m not exactly sure. I just remember that that northern end of the studio, which was painted all white, was filled with natural light.

I enjoyed meeting Close and touring his workspace. Although confined to a wheelchair, he had a commanding presence and a deep and strong voice. He was friendly but, at the same time, efficient and businesslike, no nonsense.

He showed me the spot where he painted. He demonstrated how he brought up his stretched canvases from the basement: He tapped a pedal with his foot and a new canvas rose through a slit in the floor next to the wall. With another control, he showed how he could move the canvas up and down, side to side and even pivot it around, allowing him to paint from a stationary position in his wheelchair. He stayed in one spot and the canvas moved to meet his brush.

It was interesting to see his process.

On the way out, we passed by a small office area off to the side near the front door. Close told a young assistant not to forget to mail out a thick cardboard tube, propped on the ground next to a desk, that contained a portrait photo of the Dalai Lama that Close had shot. He said they had become friends, that he thought the Dalai Lama was a very cool guy. Perhaps not surprisingly, Close was also a photographer as well as a Photorealist painter.

I didn’t do a follow-up story on Close’s situation with his studio. It’s been 15 years, but I do recall that I did try to, though. I reached out periodically, a few times, left some phone messages for his rep, sent some e-mails. I was hoping to do another story. But for some reason, it didn’t pan out. I think the rep finally got back to me and told me that Close was “working something out” with the developer. I think the artist didn’t want any more press while he was involved in negotiations — or maybe didn’t want to jeopardize a tenuous agreement he had reached. Something along those lines. This is not uncommon with ongoing news stories like this. Hopefully, the initial article helped give him some leverage.

I later saw that Close had moved out of Noho, at least temporarily. And I recall that I saw in a New York magazine feature that he was living at Morton Square in the West Village. The article even had a little floor plan of his apartment.

One freezing cold winter night I was walking with an artist friend along Hudson St. and she said she spotted Close eating inside a restaurant, but I somehow didn’t see him.

A few years ago I was walking along Lafayette St. with Terri Cude, who was on her way to becoming chairperson of Community Board 2. We looked up at the building that had gone up next to Close’s studio — we were viewing its northern side on Great Jones St. It was built to its full height but uncompleted, with its raw concrete skeletal frame open to the air. Cude explained that the thing was too tall under the allowable zoning and that the builder would actually have to lop some floors off of it.

I’m pretty sure that I later heard from someone that Close was back in his Bond St. studio space.

In recent years, some women who had modeled for Close came forward with sexual-harassment complaints against him. It sounds like it was mainly verbal harassment, in terms of offensive comments he allegedly made about their bodies. Some of this alleged behavior has been chalked up to his dementia, which removed his filters.

Right after I wrote that front-page article on Close in 2006, a couple of former interns called me and enthusiastically said they wanted to come back and work at the paper. They were excited by the article, excited by Chuck Close and his art.

Chuck Close was an art-world superstar. I’m glad he called me and that I got to meet him and write that story.