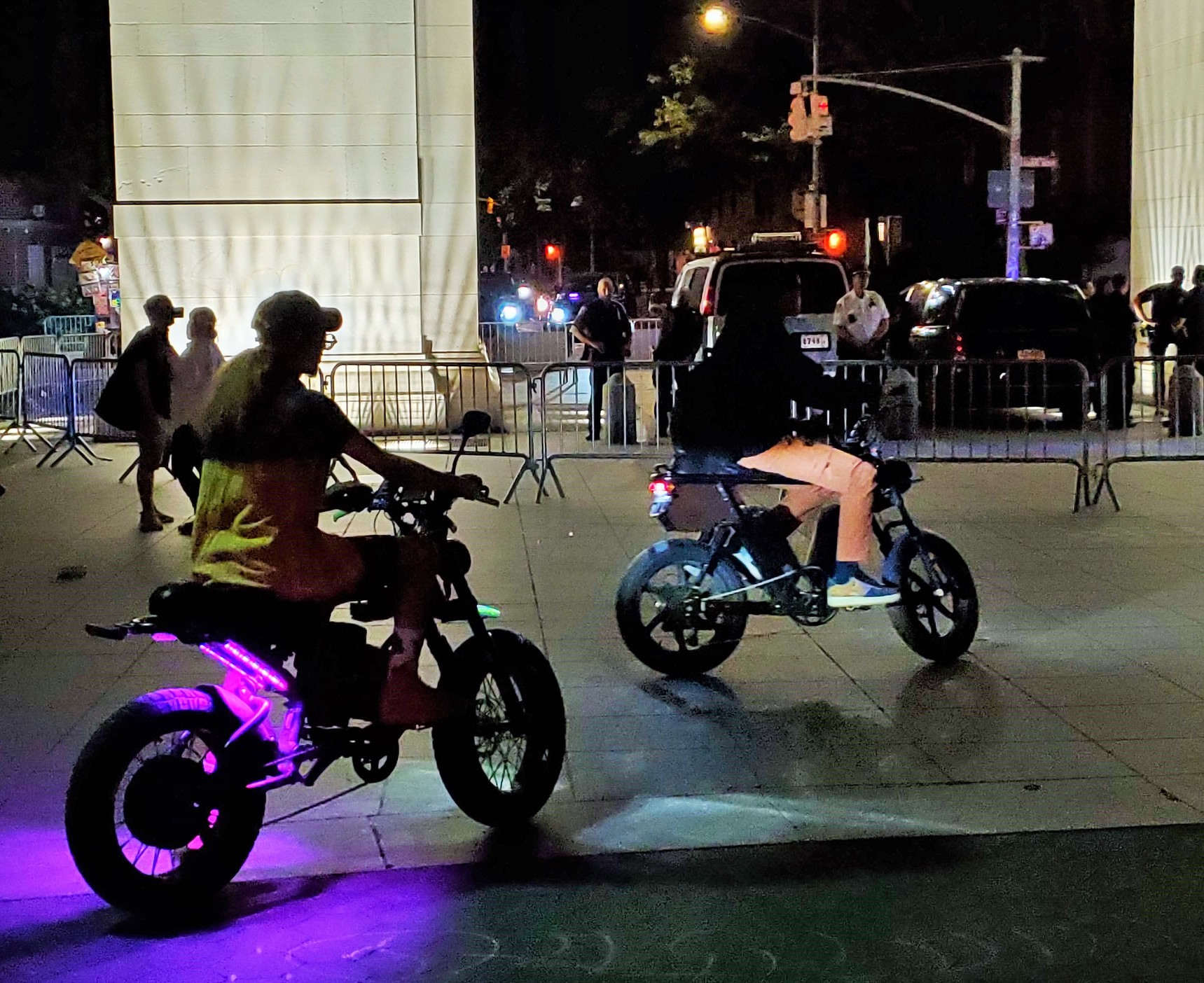 People on electric bikes ride past police in Washington Square Park on Saturday around midnight. (Photo by The Village Sun)

BY LINCOLN ANDERSON | Early Saturday morning Washington Square Park was the scene of a scary incident when a woman was knocked down and run over by a crowd fleeing a man waving a Taser. The woman was left stunned and with a bleeding head wound, and was later listed in stable condition.

Before then, it had been just another typical night — at least typical for nowadays — in the historic Greenwich Village park.

There was lots of music, most of it amplified. Young parkgoers, some holding drinks, clustered around the musicians and grooved to the tunes. A group playing African music was unamplified but still drew dancers.

In some ways, the scene is a bit reminiscent of Yoyogi Park in Tokyo. This reporter, who once taught English in Japan, recalls how rock bands performed outdoors there on weekends during the daytime and parkgoers could stroll around and check them all out. But the Japanese park, at 133 acres, is more than 10 times larger than Washington Square Park, and the area where the amplified bands play is not hemmed in by residential buildings.

At any rate, returning to Washington Square Park on Friday night into Saturday morning… .

Guys — and some women, too — were riding around on dirt bikes, gas-powered scooters and electric bikes. In fact, the plaza ringing the park’s fountain at times almost resembled a traffic circle. Generally, no one was riding too fast, though.

That is, until shortly after 11 p.m., when a pack of dirt bikes and scooters zipped into the park at a pretty fast clip and took two spins around the fountain. As if on cue, someone in the park exploded a firework. Earlier someone had set off something louder and more startling, maybe an M-80.

The easy riders then gathered on the plaza’s west side, where they revved their engines loudly and a few guys took turns popping wheelies. They then motored over to hang out in the darkness by the benches near the Alexander Holley Lyman monument, where the drug users were not to be found on this particular night.

Meanwhile, two-dozen police officers were posted under the arch, surrounded by a perimeter fence of metal police gates, but generally stayed in their area. There were fortunately some police out in the park, however, when the woman was trampled and one of them quickly carried her to safety under the arch.

There were only a few skateboarders in the park on this night. Maybe it was due to the large police presence under the arch, in front of which the young shredders like to ride and do tricks. Maybe they were afraid of getting hit by motorcycles?

Also circling the fountain was the young guy who squatted in it — complete with a collection of furniture — for about a month last spring. He was known for going around naked back then and claiming he was Jesus. On this past Saturday night, he sported a gown of some sort and was barefoot. At first he walked around the fountain, but later jogged a lap. At least it was a healthy activity.

Asked if he had lived in the fountain a year ago, he turned toward the questioner, slowly pointed to his own heart and then continued on his way.

There was, no surprise, lots of pot smoke in the air. One guy was giving out free CBD hash, which won’t get people high but might possibly relax them.

There was the sound of clinking of glass bottles on the paving.

Not to be left out, a guy who was just speaking even had an amp. He held forth on a microphone on tech-related issues. “Space X…” he could be heard saying, as a small group was gathered around him.

Somehow a writer pecking out poems on demand on a manual typewriter could still focus on his craft amid the cacophony.

All the amplifiers definitely competed with each other. As one rapper belted out a raunchy refrain of “You would f— both of us, yeah, you would” on his microphone, another guy toting an illuminated amplifier, glowing blue and blasting beats, walked by right in front of him, momentarily drowning out his flow.

Not far from the arch, a group of people were offering free pizza and water, teacher’s textbooks, even clothes. Some of them were going around with plastic bags collecting cans and bottles, trying to keep the park clean amid all the partying.

One woman, when asked what group they were with, replied with a smile, “No affiliation — and f— the police.”

Asked why she hated the cops so much, she said, “That is my only comment,” then turned back to what she was working on.

Another woman, sporting a shock of rainbow sherbet-colored hair, stepped forward and explained that the group was called PEOPLE. She said the group operates around the world.

Giving her name as They/Them, she declined to have her photo taken.

“We are here supporting people, yeah,” she said. “So if you want anything, there’s water, TP [toilet paper]… .”

As for why people would need TP in Washington Square Park at 11:30 at night, she did not explain.

Referring to the square’s party scene and her group’s efforts, she said, with a broad smile, “This is like Disneyland with free s—. … People are supporting each other, that’s what the global movement is about.”

But having police around dampens the vibe, she said.

“This stuff,” she said, nodding toward the police detail under the arch, “it’s unnerving, it’s escalation.”

She noted that PEOPLE had its own “de-escalation team” in the park. There were two guys walking around dressed all in black with their faces covered except for their eyes who looked like ninjas. If they were the de-escalation team, she didn’t point them out.

It’s not clear if there is a connection or if it was an inspiration for PEOPLE, but the Black Panthers ran the People’s Free Food Program.

DJ Subway passed by, wheeling his portable amp by its handle. He makes his living by deejaying in parks, right now mainly Washington Square Park. Later on, people started chanting and dancing to amplified music on the east side of the fountain, but it was not clear if he was the one playing the sounds.

Over all, it was a fun scene. There was no sense of danger or menace. The music was pretty good. People just wanted to dance or hang out and enjoy the park. Maybe drink a flavored malt beverage, smoke a joint. The guys popping wheelies on their motorcycles seemed like they had pretty good control of their bikes and weren’t hitting anyone. Luckily, at least they weren’t riding monster Harley-Davidsons.

Was a lot of it technically illegal under the park’s rules, though? Yes, definitely, of course. But, for whatever reason, the police just turned a blind eye to it all. Call it the Autonomous Washington Square Park Party Zone.

Then, a little before midnight, everyone swarmed toward the fountain and cheered. The 12 o’clock curfew passed without event, after which…everyone just continued enjoying the park. Party on!

About a half hour after that, though, a panicked wave of revelers suddenly came running north through the park and the woman was trampled, left dazed, splattered in her own blood.

Afterward, despite the disturbing incident and even though it was already past the park’s curfew, the merriment started right back up again, the party rocking on into the early morning.