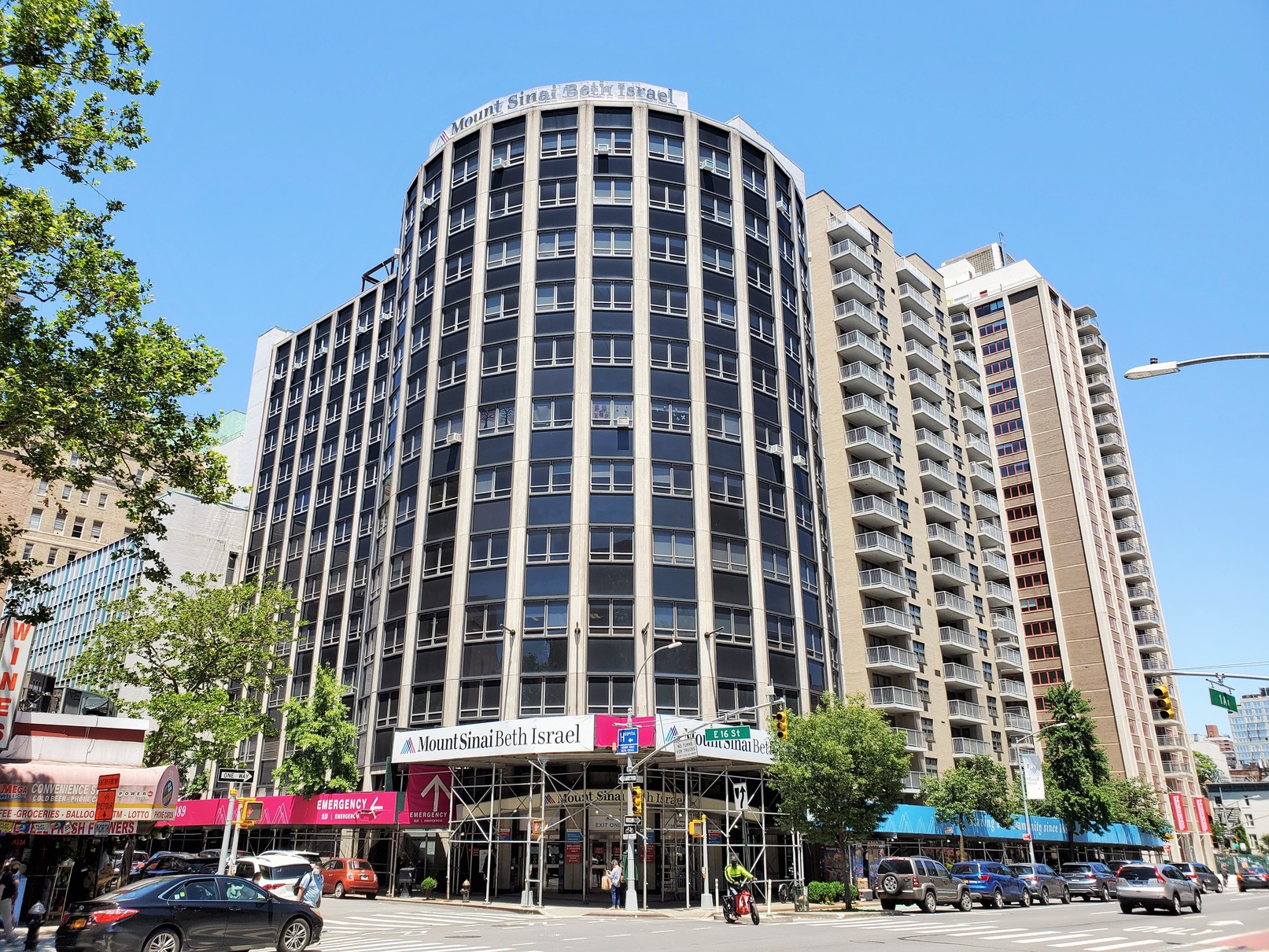 BY LINCOLN ANDERSON | Updated June 17, 3:15 p.m.:  In a medical miracle Beth Israel Hospital has been saved. That is, the existing hospital will not be demolished as part of a rebuilding plan.

Mount Sinai has announced that it has scrapped plans to close Beth Israel, at 16th St. and First Ave., which is authorized to have 800 beds. The health system had intended to shut down and sell its Gramercy campus and build a much smaller mini-hospital with only around 70 beds at Second Ave. and 13th St.

Mount Sinai said the pandemic demonstrated the need for the larger hospital and the need to be prepared for surges, as occurred during COVID-19.

In a statement, Mount Sinai said, “The COVID-19 pandemic brought unprecedented challenges to our city, regional healthcare providers and the Mount Sinai Health System. These changes forced us to assess and rethink many aspects of how we can provide and improve care, including re-envisioning the future of Mount Sinai Beth Israel.

“Under our new plan, we will be staying on our current block and overhauling, modernizing and investing in the current 16th St. campus. These changes will provide upgraded and enhanced facilities, as well as better enable us to surge capacity to meet the needs of our community, no matter what the future brings.

“One key aspect of the new plan is a greater flexibility of space and increased ability to expand the number of surge beds, should we need them. While we are still in the early phases of the process, under our new plan, we will be able to surge to the same bed capacity as we did during the height of COVID, which is also more than twice the surge-bed capacity as the old 14th St. plan.

“We will be able to provide more details and specifics soon but all planning on the new Mount Sinai Beth Israel campus will be subject to state review and approval.”

Politicians and health activists rallied outside Beth Israel on Wednesday morning to cheer the news and also to call on Mount Sinai to return services and departments to Beth Israel that were quietly moved out to other facilities in preparation for the now-scuttled rebuilding plan.

Councilmember Carlina Rivera said the battle over the past several years to save the existing hospital had seen a lot of “blood, sweat and tears.”

“Mt. Sinai is not relocating, but will renovate on 16th and 17th Sts.,” she said, though adding, “That will only happen if we keep fighting. We must address the systemic inequities that COVID-19 has exposed. Just increasing surge capacity is not enough.”

Rivera and other speakers said departments that were transferred out of the hospital to other parts of the Mount Sinai Health System must now be returned, such as the maternity ward, neonatal care, cardiac surgery and pediatric care.

“M.S.B.I. will be undergoing a new certificate of need [process] for the renovation,” she noted. “That will need the community voice included. The hospital will be the first critical step,” she said, “but we need to return beds and services.”

The press conference was held in front of a former Beth Israel nurses high-rise residence on 17th St. that recently was converted into a New School dormitory.

“Beth Israel is not being transparent enough, including about the buildings it plans to sell,” Rivera charged.

Mount Sinai plans to transfer its behavioral health in-patient facility from the Bernstein Pavilion, which is currently part of the Beth Israel Hospital campus, to 45 Rivington St., the former Rivington House, which is expected to be ready for use by the end of 2022.

Also, in February, Mount Sinai closed its New York Eye and Ear Infirmary of Mount Sinai (NYEE) outpatient ENT clinic at 14th St. and Second Ave., which was on the block where the new mini-hospital was to be built, relocating it to the Upper East Side near Mt. Sinai Hospital.

“I want other residents to have the chance to be born in this hospital,” he said.

Similarly, Village District Leader Arthur Schwartz, who is a candidate for City Council in District 3, said his first two children were born at Beth Israel. In addition, after suffering a heart attack in 2017, he was rushed to the Gramercy hospital to receive stents. Otherwise, he said, he would have had to have gone all the way to an Upper East Side hospital for the life-saving procedure.

Schwartz filed a lawsuit against Mount Sinai over its downsizing plan for Beth Israel, charging that it was secretively shutting down departments at the hospital without going through the proper procedures.

“We slowed it down,” he said of the lawsuit’s impact on the Beth Israel plan.

Last March, at the start of pandemic, Schwartz and hospital activist Penny Mintz held a press conference in front of Beth Israel, demanding that Mount Sinai open up 400 beds that they charged were being “warehoused” inside the hospital, to help meet the expected surge of COVID patients. Mount Sinai did reactivate the mothballed beds — but claimed it had already planned to do so.

Like others at the press conference, Schwartz said Beth Israel still has work to do.

“We put our litigation on hiatus but we ain’t through,” Schwartz warned, indicating the lawsuit could still be reactivated. “The state, the governor doesn’t give a damn — all he cares about is numbers and the probability of hospitalization.”

Anthony Feliciano, director at the Commission on the Public’s Health System, said the pandemic showed what healthcare activists have said all along about the mistake of closing and downsizing hospitals. He recalled the recent shuttering of Cabrini Hospital in Gramercy and St. Vincent’s Hospital in Greenwich Village.

Saving the existing Beth Israel Hospital campus is a victory, but it’s not the end of the fight, he declared, adding that services must be restored.

“We can commend Mount Sinai but they are still going to owe us a lot more,” he said.

“What’s going to happen to Bernstein, New York Eye and Ear?” she added of Mt. Sinai’s real estate changes. “That’s got to be part of the discussion.”

State Senator Brad Hoylman said of Mt. Sinai, “It’s too bad it took a worldwide pandemic for them to get the picture — but we were right all along. It’s about time we did comprehensive health planning across the state of New York.”

Rivera, who chairs the City Council’s Committee on Hospitals, introduced veteran lawmaker Richard Gottfried, who chairs the Assembly’s Health Committee, cheering him as “our healthcare hero.”

Gottfried, in his remarks, noted that the Health Equity Assessment Bill, which was passed by the Assembly on June 1 but is awaiting state Senate approval, if it had already been law, would likely have blocked the Beth Israel downsizing plan.

“If that bill had been law when the whole Beth Israel process had started,” he said, “I think we would have had a different result.”