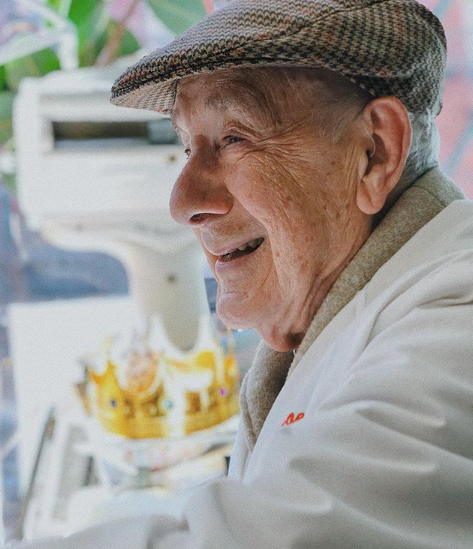 BY THE VILLAGE SUN | Moe Albanese, who ran a family-owned butcher shop in Little Italy since the 1950s, died on the morning of Wed., April 8. He was 95.

His granddaughter Jennifer Prezioso posted on Instagram that he had entered the hospital two days earlier “due to complications from covid-19.”

While Albanese continued to be a presence at the nearly century-old store, Albanese Meats and Poultry, sitting outside on the sidewalk, in late 2018 his granddaughter took over running the business. (The Google Street View photo of the address shows Albanese in his familiar spot, perched on a chair out in front.)

On Monday, his granddaughter posted, in part, “Moe is certainly a fighter and has been through more than you or I ever could. I just wish I was there to hold his hand, to stroke his forehead, to lay in bed with him, like I have been for the past two weeks as we recovered together. He was supposed to come home yesterday, but things suddenly got worse, which is why I am writing this today.”

On Wednesday after he had passed, she posted, “We were so worried of how you would recover after all this. If the virus didn’t kill you, not being at the store again certainly would’ve. It took a global pandemic to get you to stop going. Even your final day there, I was yelling at you, ‘You can’t invite the tourists in right now! Keep your gloves and scarf on!’” 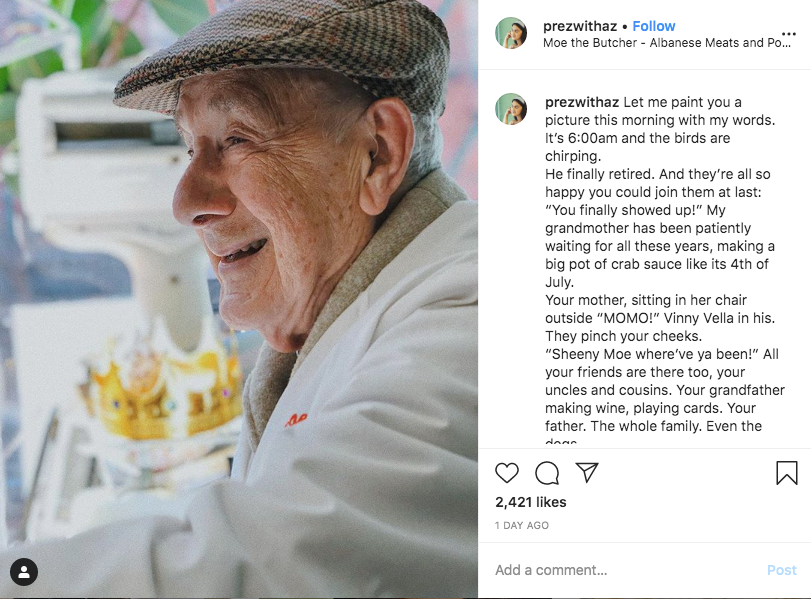 Prezioso’s posts about her grandfather can be read in their entirety on Instagram at @moethebutcher.

Moe Albanese ran the butcher shop with his mother, Mary, and then on his own after her death in 2002. Mary also lived to a very old age, 97.

The old-school butcher’s earned notoriety recently as the setting of “Lutzi’s Butcher Shop” for the second season of the TV show “The Marvelous Mrs. Maisel,” which also filmed its pilot there.

The shop was founded in 1923 by Moe’s parents at a spot across the street, and has been at its current address at 238 Elizabeth St. since 1940. Moe’s father died in 1952, after which Moe partnered with his mother in running the place. The family also used to have a steakhouse across the street.

In a Sept. 13, 2018, profile, Calvin Hewitt, who has been a customer since 1972 and is black, recalled how Albanese would protect him.

“Any time I went outside,” Hewitt said, “Moe would walk with me, and he put his hand around my shoulder to let everyone know this is my friend, this is Moe’s friend. So that kept everybody cool, so I got a chance. People knew me then.”

Albanese Meats and Poultry is located a block north of the Elizabeth St. Garden. On Wednesday, after seeing Prezioso’s post, Joseph Reiver, the garden’s executive director, paid his respects.

“I stopped by the shop yesterday to put some flowers there from the garden,” he said. “Others had done the same and left touching notes.”