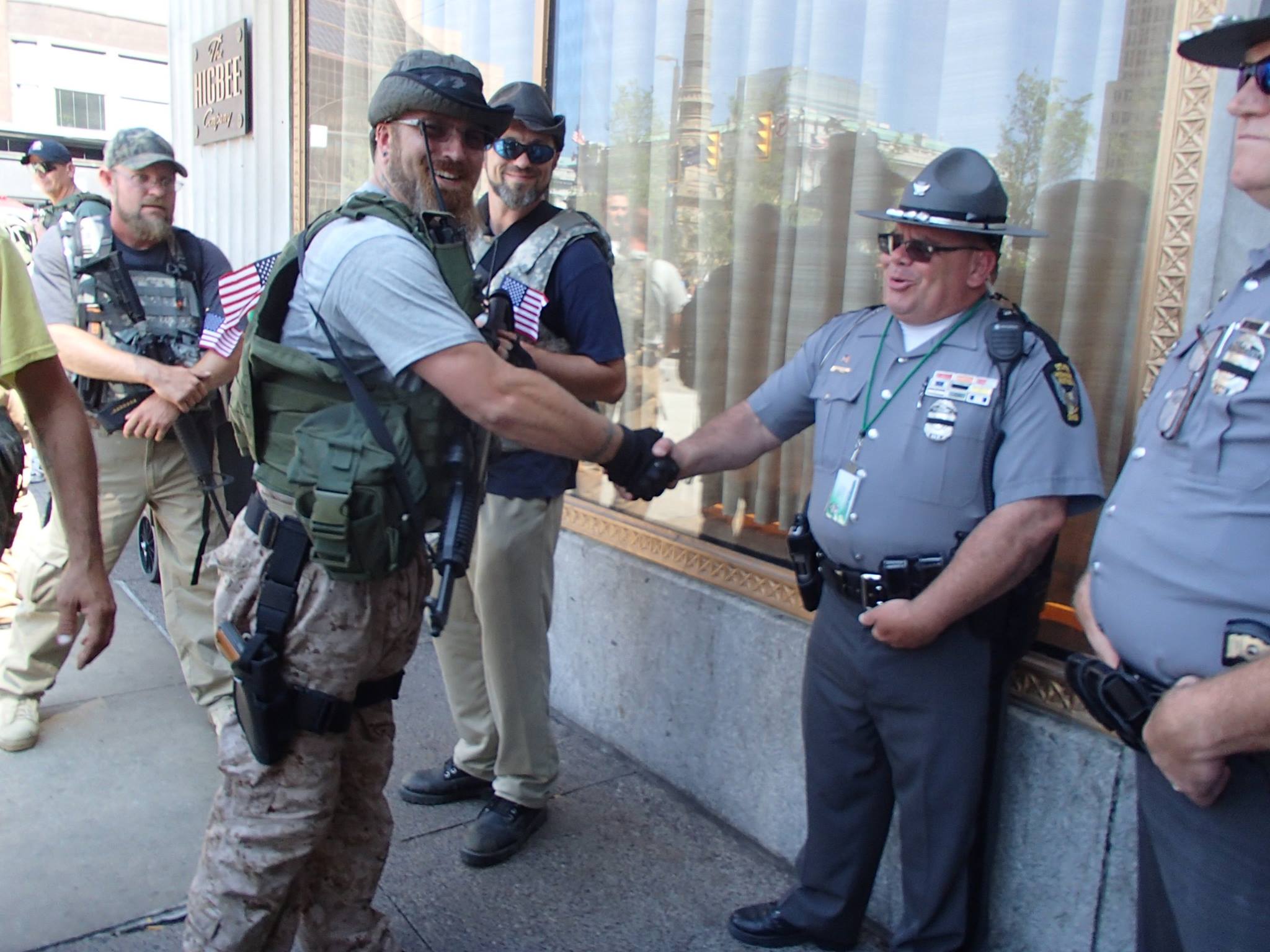 At the Republican National Convention in Cleveland in 2016, an Ohio Minuteman militia member shook hands with a police officer. The militias actively recruit former military and former police officers. (Photo by John Penley)

Militias, not lone-wolf ‘nutcases,’ are the real threat, photographer warns

BY LINCOLN ANDERSON | We all know their photos by now: The “QAnon Shaman,” the Brooklyn judge’s bearskin-bedecked son, the goofily grinning guy toting off Nancy Pelosi’s lectern.

These treasonous miscreants, who have all been arrested, are just a few of the Trump supporters who stormed the Capitol on Jan. 6 in a shocking day of rage that left five people dead and the entire world aghast.

But what about the potentially far more dangerous militia members who invaded the U.S. seat of government? Is law enforcement hunting them down, too, and with the same urgency? That’s what a photojournalist who covered the turmoil during Donald Trump’s presidency and its campaign lead-up was wondering recently.

That is, wondering until this Tuesday, when it was reported that federal prosecutors had filed conspiracy charges against three members of the Oath Keepers, an extremist, gun-loving group claiming thousands of members around the country. According to news reports, the complaint says the trio planned and coordinated prior to the Jan. 6 Capitol attack.

The complaint alleges that, while at the Capitol, one of the Oath Keepers, Thomas Caldwell, received a Facebook message stating, “All members [of Congress] are in the tunnels under capital seal them in. Turn on gas.”

John Penley, a former East Villager now living in Las Vegas, was not surprised the feds are finally zeroing in on militia members and far-right extremist groups who joined in the insurrection. In fact, just a couple of days before Tuesday, he had been asking when the crackdown would commence on these groups’ members who breached the Capitol.

Penley shared with The Village Sun photos he took of Trump campaign events, the deadly Unite the Right rally in Charlottesville, Virginia, protests at both 2016 national political conventions and more. One theme running through some of the pictures is the presence of one militia group, in particular, the Ohio Minutemen, with their distinctive Armor of God patch.

“I call it the ‘Trump Era Series,'” Penley said of the photos. “You’ve got that Army of God [patch] connection. They were at the inauguration and Charlottesville and the Capitol riot. They just got identified [for storming the Capitol] but none of them have been arrested yet.

“I think they’re afraid of these people,” he wagered of what law enforcement is likely thinking. “They’re organized. They’re not like individual nutcases — it’s easy to go around and lock those people up. The militias have been organizing for armed revolution or a breakdown of society for a long time. … They’ve been planning that the government’s going to come and take their guns for years.”

Penley said the Ohio Minutemen, in particular, have had a presence at many of the events that he has covered in recent years, some of which have featured conflict.

“This one group is really out there in the streets, above the others,” he said. “You can see how there’s a progression of fascist involvement with Trump as time goes on.”

A voracious news junkie, Penley has a bad feeling about how things are trending. Before the Unite the Right rally in Charlottesville in August 2017, he had accurately predicted there would be major violence there. Antifa counterprotesters and white supremacists clashed in Charlottesville, with one of the latter plowing his car into a group of counterprotesters, killing Heather Heyer, 32.

Afterward, Trump infamously said there were “fine people on both sides” at Charlottesville and was decried for not strongly condemning the neo-nazis.

“It’s all up in the air, but I’m afraid it’s heading toward civil war,” Penley said. “I’ve been in the streets covering this. The pandemic is making people that were already crazy crazier. The Trump stuff has given them something to be crazy about,” he said of Trump’s reckless charges that the election was stolen.

He was referring to the F.B.I. siege of the Branch Davidians cult in Waco, Texas, in 1993, in which 79 people died after a 51-day standoff, and the deadly 11-day siege of Randy Weaver and his family in Idaho in 1992 by U.S. marshals. Weaver was a white supremacist who had failed to appear in court on gun charges.

“Once they go after one militia and start to round them up,” Penley said, “the rest of them will go into combat mode. They’ve been preparing for this. … The Oath Keepers around the country are not going to be happy. This is going to go on and it’s going to provoke a whole lot of terrorism.”