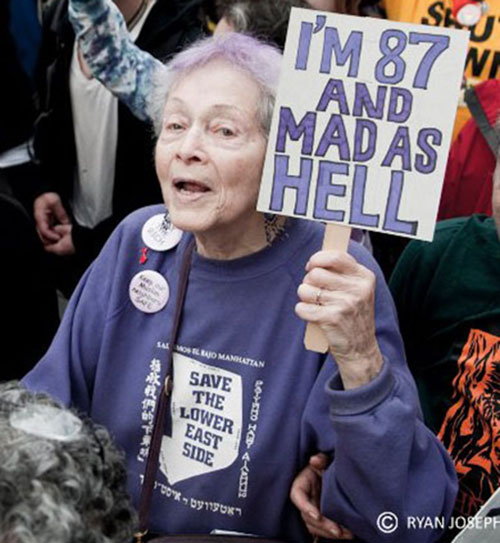 BY LINCOLN ANDERSON | A virtual memorial will be held for legendary Lower East Side housing activist Frances Goldin on Sat., May 15, at 2 p.m.

Goldin died last May at age 95. Starting in 1959, she was a leader in the fight to defeat Robert Moses’ urban-renewal plan for the Cooper Square neighborhood.

The planning czar’s project would have leveled 12 city blocks, including hundreds of buildings, between E. Ninth St. and Delancey St. to create a Stuyvesant Town-style middle-income complex, while displacing 2,400 tenants.

Instead, Goldin and her allies fought to implement an alternate community plan that saved existing buildings with affordable housing. The plan also eventually added new development with mixed-income housing, including the large building with the Whole Foods Market and YMCA on the south side of E. Houston St. and the Bowery and the other large residential building across E. Houston St. from it.

Later on, Goldin launched her own boutique literary agency, specializing in books by leftist and radical writers. Her Frances Goldin Literary Agency published Barbara Kingsolver, Adrienne Rich and also Mumia Abu-Jamal, who was convicted in the 1981 killing of a Philadelphia police officer and, after being taken off death row, is now serving a life sentence without parole.

Her daughter Sally Goldin told The Village Sun that there will be more than 30 speakers at the memorial, including family members, fellow Cooper Square Committee activists, people from Goldin’s literary agency and a group of close friends that she knew for more than 40 years. People will each speak for two to four minutes and the event is expected to last about two and a half hours.

It’s not clear if Abu-Jamal, who was recently found to need heart surgery, will be able to share a prerecorded 2-minute audio clip. After Goldin’s death, he recorded a heartfelt 7-minute audio tribute to her.

The link for Frances Goldin’s memorial will remain active, so those who cannot tune in during the actual event can watch it at any time.