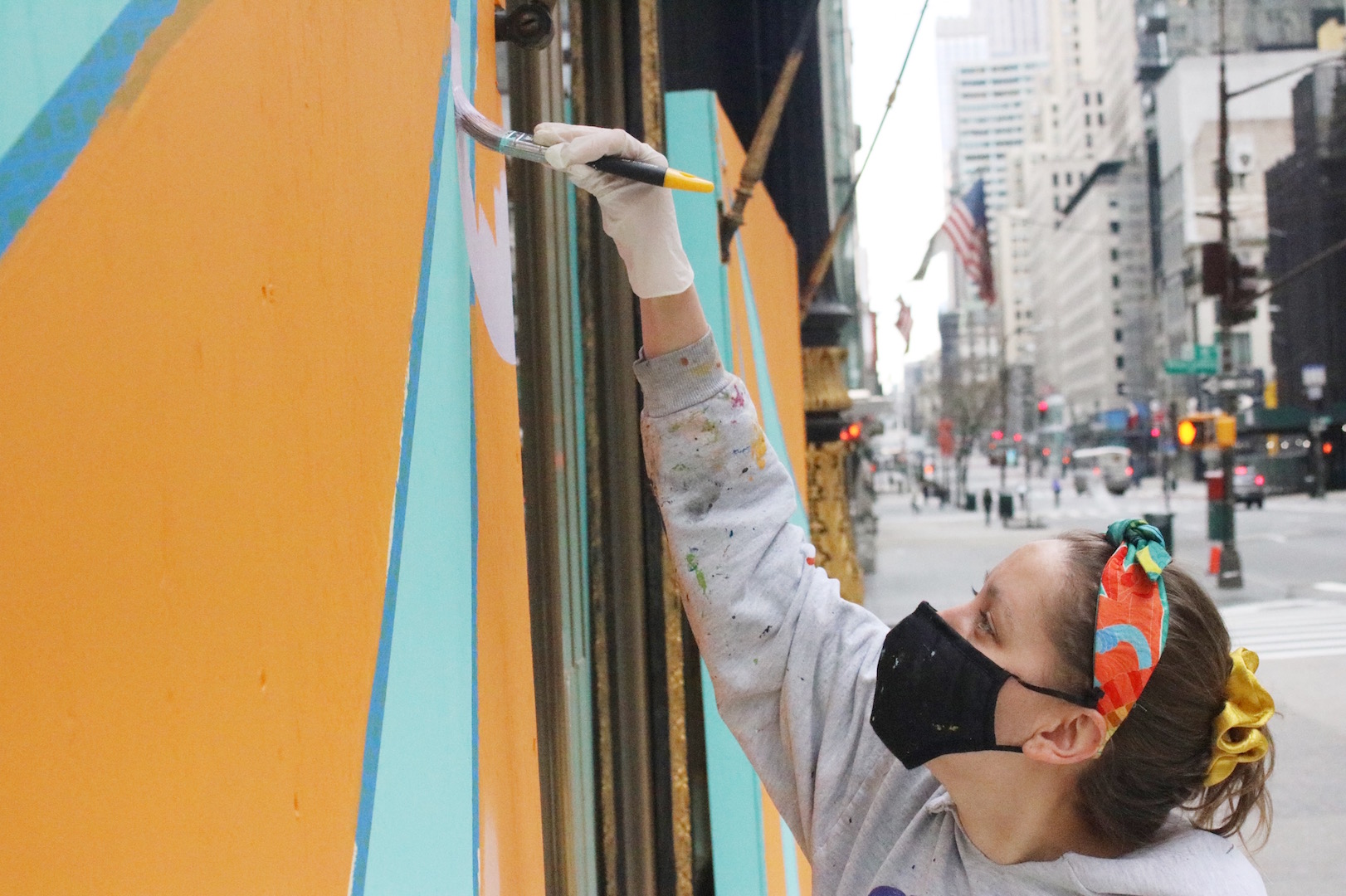 Theresa Rivera working on an art mural on a boarded-up boutique. (Photo by Samantha McElaney)

Meatpacking murals paint the way to a brighter day

BY RANIA RICHARDSON | When New York City’s nonessential businesses shut down due to the pandemic, luxury brands began boarding up their storefronts, signaling an interruption in brick-and-mortar retail. High-end corridors across town, from Madison Ave. to Soho turned unsightly in the process.

“A boarded-up neighborhood is not a welcoming neighborhood,” said Jeffrey LeFrancois, executive director of the Meatpacking Business Improvement District.

LeFrancois consulted with colleagues in other cities, such as Seattle and San Francisco, and concluded that when it comes to shuttered areas, art mitigates graffiti tagging and vandalism. Where there was plywood covering a closed retailer, he saw a blank canvas, and seized the opportunity to create a makeshift art installation by commissioning several murals for the BID.

“There came a moment where we had to react, since while this area is commercial at its core, a lot of people live in and around it,” LeFrancois said. “Residents in the vicinity, including Chelsea and the West Village, need to stretch their legs, walk the dog, visit the doctor, buy groceries or exercise. They can now see that we are just on pause, but we are still active and thinking,” he said, of his district, which is bounded by Horatio and W. 17th Sts. and Eighth and Eleventh Aves.

On the evening of March 19, LeFrancois sent a text to Theresa Rivera requesting that she develop a few mural ideas.

“We need some help. Can you do this safely?” he asked.

The two had known each other for years, and previously partnered in the decoration of a shipping container for the BID.

Rivera went to work creating design samples, including floral and cloud motifs. That night, the final option was chosen quickly because it was the most stylized and graphic, and stood out for its cheerful, bright palette. It was inspired by a photo shoot Rivera had conceived recently for The New York Times, reminiscent of Matisse cutouts and Calder mobiles.

The next day, Rivera and a small team of her regular fabricators worked 12 hours at Sephora, on what was to become the first of several murals. A paint-by-numbers approach simplified the process, although there was room for spontaneity.

Rivera, who is based in Red Hook, Brooklyn, studied painting and drawing at SUNY Albany and taught art to preschoolers. She switched gears to work for Mary Howard, the longtime set designer for photographer Annie Leibovitz, and then went on to set up her own design shop.

“For an artist, this is not a time to be stressed about the next masterpiece,” Rivera said. “I want to give a little optimism and shine a light in this crazy time. I’m thankful that this has been received well. It feels good.”

Sephora, Christian Louboutin, Tory Burch and two sides of Arhaus now feature the colorful compositions, in addition to stores in other parts of town. Northwell Health has reached out for murals to honor essential workers.

Employing the same crew for each job, Rivera makes sure everyone has safe access to the sites by bike or their own vehicle. The team members’ temperatures are checked between jobs and a 6-foot distance is generally maintained while they are working together. The fabricators come with their own supply of masks, which are personal protective equipment they use on their regular assignments.

Currently, amid the lockdown, the Meatpacking District has a retro feeling harking back to when the meatpacking plants were the area’s main operators. J.T. Jobbagy and a handful of other meat purveyors — essential businesses — appear to provide the area’s only bustling activity.

The murals will help pave the way to the future, when the district’s other businesses reopen.

“Art will be a critical part in our comeback,” LeFrancois said. “Art matters.”