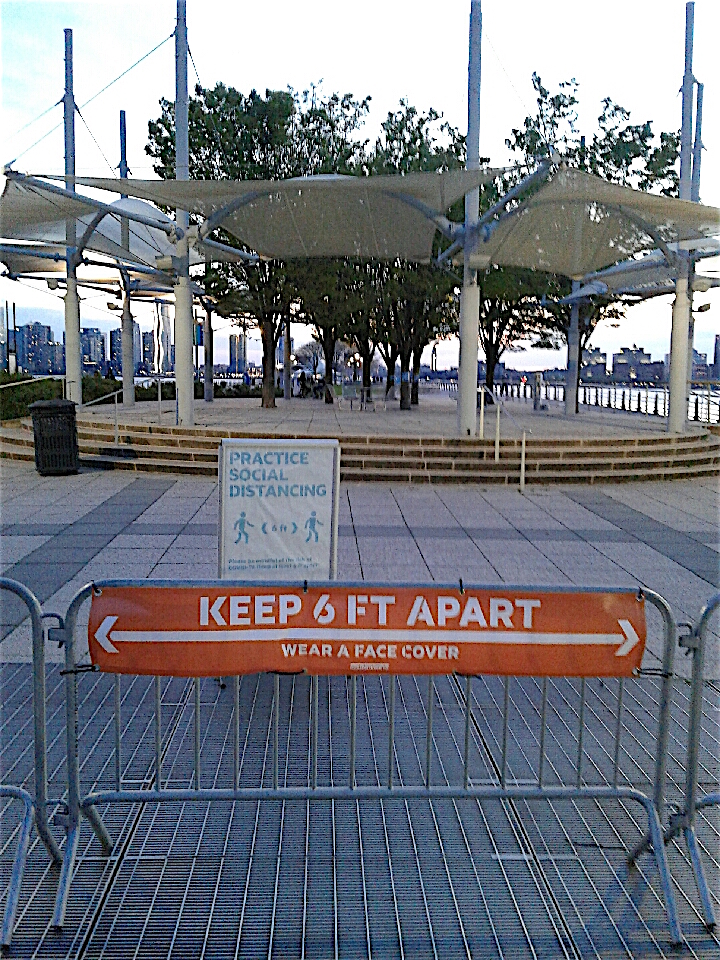 Last weekend, metal gates were stretched across the front of Pier 45, the Christopher St. Pier, as police started restricting the number of people allowed onto the pier at any given time. (Photo by The Village Sun)

BY THE VILLAGE SUN | Maybe Pier 45 should change its name to Studio 54.

The Greenwich Village pier — also known as the Christopher St. Pier — suddenly got a lot more exclusive. Last Friday, the mayor said police would now be doing crowd control for the hot spot and limiting the number of people allowed onto the structure at any given time.

At one point on Sun., May 3, authorities finally booted everyone off the pier’s signature lawn — but the Hudson River Park Trust said it was only to protect the grass, which was being reseeded. A low-flying police helicopter was even brought in to keep an eye on things and make sure there was no overcrowding amid the COVID crisis.

Just to the north, the smaller Pier 46 a.k.a. the Charles St. Pier, which sports an artificial-turf lawn, was also overrun by people seeking relief from sheltering in place.

In his remarks last Friday, De Blasio said, “We know we have a new challenge, the warmer weather. … We know we had some parks last weekend that were more crowded than they should have been. And we know it wasn’t just some…individuals — it was really the physical reality of the park. So we want to do something different.

“So, for example…Hudson River Park was one of the places where we saw too many people too close together. Hudson River Park, Piers 45, 46 we’re going to proactively limit the number of people who can be in any given area right there. We’re going to have the N.Y.P.D. working with other agencies from the very beginning of the day, limiting the number of people who go in.

“Obviously, offering people face coverings, as well, and keeping an eye to make sure the number of people never reaches too high a point and, when it does, obviously, asking people to move out and make more space — make sure there’s turnover.

“Why are we doing this?” Hizzoner continued. “Because it saves lives and that’s what we’re going to tell people from the beginning. If you’re going in, you’re going in for a limited period of time. We’re not going to let it get too crowded. If people don’t want to wait and they come and there’s a lot of people there and you have to wait — a lot of people are going to move on. If people do want to wait, we’re going to make sure they’re socially distanced. But we’re going to start using this kind of approach in these parks. … The idea is proactive. … N.Y.P.D. and other agencies are there before people show up in numbers. We set the tone from the beginning. We think this is going to help a lot.”

This past weekend, a line of metal crowd-control gates stretched across the entrance to Pier 45. Signs were also posted on the pier telling people to keep 6 feet apart from each other. The Village Sun did not visit the pier during the height of the day to check out crowd numbers — but the weather was cooler, which surely dampened the turnout.

Asked if police are using any specific parameters on how many people to let on the pier at once, or for how long — or are just sort of “eyeballing” the crowd size and playing it by ear — a police spokesperson did not provide further details. Instead, he referred The Village Sun back to the mayor’s generally worded statement from last Friday.

Also, while many people still won’t wear face masks, de Blasio stressed that everyone should be using one.

The Hudson River Park Trust, the park’s governing state-city authority, is also urging all parkgoers to be conscious of health safety. Face coverings are, in fact, currently mandatory within the park.

Per the Trust’s Web site: “All Park visitors must take measures to protect their own health as well as that of their neighbors by: 1) wearing masks or face coverings within the Park, 2) staying 6 ft. apart, and 3) by spreading out to take advantage of the Park’s four mile length and many piers and lawns.”

A note by Madelyn Wils, the Trust’s president and C.E.O., reiterates these rules — with a special plea to all the refusenik runners to don face masks:

“We are grateful to be able to provide New Yorkers with fresh air, river views and space for solitary recreation,” Wils’s note says. “Given the large number of visitors, we ask that Park users [who are] coming here to exercise help protect each other by wearing masks or covering their faces and staying 6 ft. apart. To all runners, please cover your face and be aware and respectful of other people as you pass them. We remain committed to making the Park an enjoyable place that may offer solace as New Yorkers weather this crisis. Thank you, everyone, for your support and cooperation. Be safe.”

While access to the Christopher St. Pier has gotten more restrictive for people, things are loosening up for dogs in the waterfront park. The Trust, on Saturday, reopened the park’s dog runs in Tribeca, at Leroy St., at Chelsea Waterside Park and at Pier 84 (44th St.). Dog owners must wear a face covering to enter the dog runs and remain 6 feet apart while inside of them.

Most of Hudson River Park’s lawn areas and piers remain open. However, all park programming and all recreational permits for sports fields have been suspended. Also closed are basketball and tennis courts, skate parks, playgrounds and some playing fields.

In related news, following all the media coverage on unsafe crowding at the Christopher St. Pier two weekends ago, the Trust is no longer retaining public-relations group Risa Heller Communications. More information was not immediately available on why the P.R. firm had been dropped.