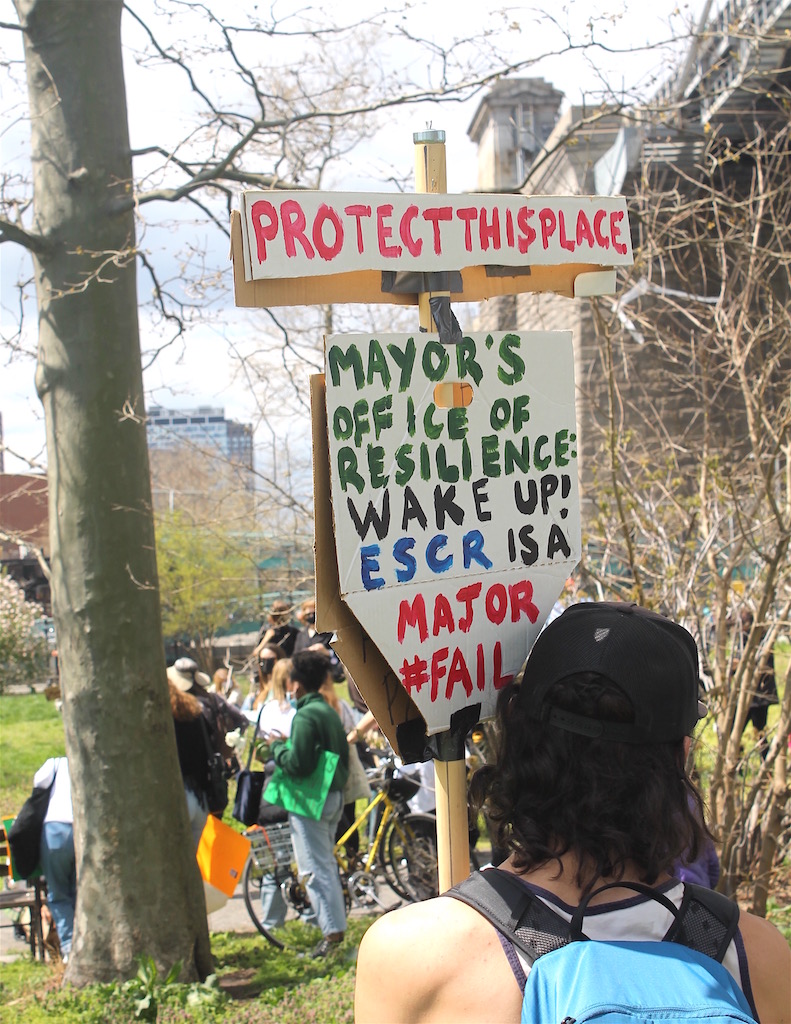 An East River Park activist held a sign at a rally in April to save the park. (Photo by The Village Sun)

BY LINCOLN ANDERSON | The “E” in E.S.C.R. apparently does not stand for equity.

Two weeks ago Stringer sent the contract back to the Department of Design and Construction, saying it failed to meet the city’s stated goal of having 30 percent of the work contracted to Minority- and/or Women-owned Business Enterprises. For unexplained reasons, D.D.C. lowered the bar for M/WBE hiring for this project to 16 percent. Yet, for its part, IPC reportedly has said up to 32 percent of the work could be subcontracted.

In addition, in his review of the contract, Stringer called out D.D.C. for not ensuring that all the companies comprising IPC, which is a joint venture, have filed the required disclosures under the city’s PASSPort system, as required by the Procurement Policy Board rules and the New York City Administrative Code.

The embattled E.S.C.R. plan calls for East River Park to be buried under 8 to 10 feet of landfill to raise it above the floodplain. The project, which would take at least several years to complete — though opponents fear it would drag on years longer — would obliterate almost everything in the 82-year-old park, including 1,000 mature trees.

A spokesperson for Carlina Rivera did not respond when asked by The Village Sun what the city councilmember thinks of the E.S.C.R. contract falling nearly 50 percent below the city’s M/WBE hiring goal. Rivera has championed the coastal resiliency project, arguing that it is urgently needed to protect the surrounding neighborhood against coastal flooding and storm surges, as occurred during Hurricane Sandy in 2012.

Meanwhile, Tommy Loeb, a member of East River Park ACTION, said that at a recent meeting of the community advisory group for the resiliency project that he attended, it was reported that only one local person has been hired for the E.S.C.R. work that is currently ongoing north of 14th St. He said he also received an e-mail from a D.D.C. representative stating this.

“The goal for north of 14th St. was 12 percent M/WBE,” Loeb said, “but the construction there has literally one person from the community.”

Loeb said the city is saying the demolition of East River Park could now start as soon as September or October.

“Our greatest fear is they’re going to go in there and cut down 1,000 trees,” he said. “They’re telling us they will proceed sometime in September or October.”

The Grand St. resident said it’s disappointing that Stringer, after sending the contract back to D.D.C., is now just rolling over for de Blasio.

“What’s upsetting is that Scott won’t challenge the mayor further,” Loeb said. “He has a chance to sort of speak out — and maybe he will.”

In addition, D.D.C. recently made public some more pages that were previously redacted from the Value Engineering Study that compared the current resiliency plan with an earlier version. The early design would not raise the park but would build protective berms along the F.D.R. Drive’s eastern edge. East River Park ACTION supports this earlier plan.

One alleged reason for scrapping the earlier iteration is that it would have required digging up and moving Con Ed cables that run underneath the park. However, a recently unredacted page from the V.E.S. report notes that, even under the current plan — referred to as the “alternative concept” — the Con Ed cables might potentially need to be “excavated” and “wrapped,” and that, furthermore, the current plan “could impact Con Ed negotiations.”

Loeb said no one has any idea what these negotiations with Con Ed refer to.

“Every time they unredact something,” he said, “it leads to more questions.”