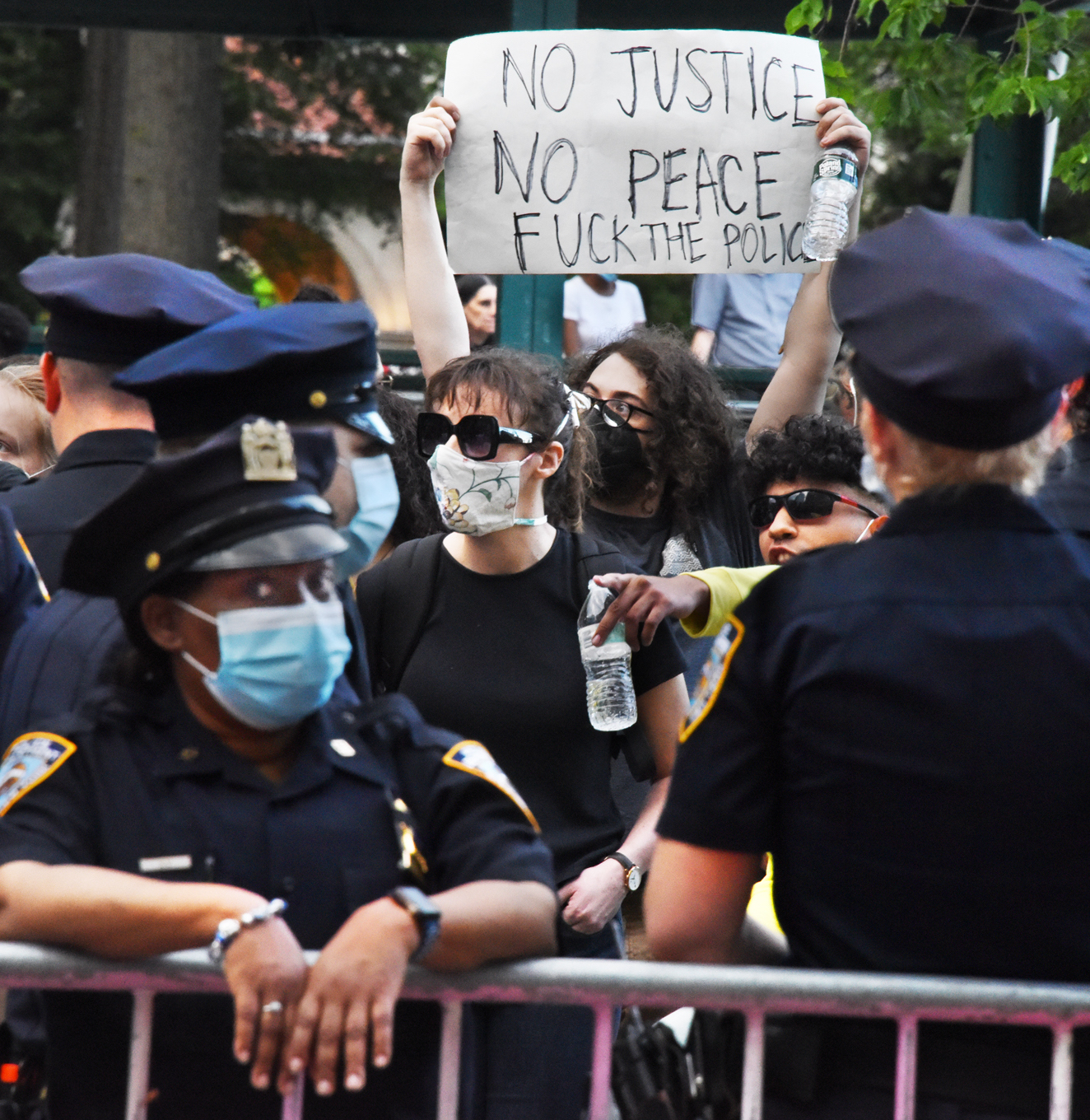 Police and protesters at Union Square on Saturday afternoon. The violence started later that evening as more than a dozen police vehicles in the area were torched and vandalized. (Photo by Bob Krasner)

Mayor: Outside agitators behind violence at protests

BY THE VILLAGE SUN | Protests over the death of George Floyd continued to rock New York City for the third straight day.

Derek Chauvin, the Minneapolis officer, who knelt on Floyd’s neck for eight minutes, during which Floyd died, was charged on Friday with third-degree murder and manslaughter.

But anger on the streets has continued to flare, with protesters clashing with police and torching police cars and vans and other vehicles.

While the demonstrations have started out peacefully, many have devolved into pandemonium.

Most of the violent protests have been in Brooklyn, but mayhem ignited — literally — in Manhattan on Saturday.

Shortly after 9 p.m., Union Square-area activist Gail Fox said demonstrators were setting fires along the curb on 14th St. between Fifth and Sixth Aves. Then, sometime after 10 p.m., two police vans were burned at Union Square.

Over all, at least a dozen police vehicles were reported burned and/or vandalized in and around Union Square. Some were scrawled with graffiti saying, “PIG,” “OINK” and “FTP,” as in, “F— the police.”

“I do see the sadness and support for Floyd,” Fox said. “Earlier, the demonstrators were peaceful. That is what I saw around 3 p.m. on the square — I was just out briefly. Then I see a separate layer of provocateurs. Since we have no analysis available, this is subjective.”

“We just had a phalanx of police cars and marchers shouting ‘Black Lives Matter’ go by our window,” he said, adding, “Sounds like they’re coming back.”

Three minutes later, Pincus e-mailed, “People running down the streets being chased by police cars, sirens in the background. Chaos.”

The previous night, 200 protesters were arrested.

One of them was Samantha Shader, a 27-year-old Upstate woman from Catskill, N.Y., who police said tried to throw a Molotov cocktail through the back window of a police van with several officers inside it in Brooklyn. The device failed to ignite, and she was arrested and charged with four counts of attempted murder.

Former Police Commissioner Bernie Kerik branded Shader and her sister, who reportedly tried to interfere with the arrest, “Antifa terrorists”

Samantha Shader of Catskill, is accused of throwing a molotov cocktail at an NYPD vehicle with four cops inside and could be charged with attempted murder. Her sister was also arrested. They weren’t there for George Floyd, and they DON’T live in Crown Heights. #AntifaTerrorists pic.twitter.com/bObpizxAJY

Kerik isn’t exactly a paragon of virtue himself, though, having been out of jail for six years after serving time for tax fraud and making false statements.

In a statement early Saturday afternoon, Mayor de Blasio defended the right to demonstrate but condemned violence and acts of destruction.

“And,” he added, “any protestor who tries to take the humanity away from a police officer and devalue them just because they are a public servant is no better than the racists who devalue people of color and particularly black men in America.”

“We can do better than this and we must,” Shea urged. “We fully remain committed to supporting the right to publicly assemble, to protest, to free speech — this is at the heart of everything that we believe in. But at the same time, we will have zero tolerance for individuals looking to cause harm to anyone.”

Meanwhile, protesters’ videos have also captured incidents by police. In one, an officer is seen shoving a diminutive woman hard in Brooklyn, sending her flying to the curb.

I fixed the video for you, and also slowed it down on replay. pic.twitter.com/TTRUSiOFY2

“We’ve seen some videos where protesters were handled very violently and very roughly, and that is not neighborhood policing and we will not accept that kind of behavior from any police officer,” de Blasio said earlier on Saturday morning.

Chief Terence Monahan, chief of department, said the woman being shoved happened in the context of the Barclays Center protest, where demonstrators aggressively battled with police for hours in a “chaotic” situation.

“There were likely thousands of bottles, bleach, batteries, rocks thrown at the police officers,” Monahan told WCBS Radio. “This was a very organized attack on police officers that was committed by people not from the communities, not from New York. A lot of instigators were here solely for one reason: to fight the police.”

For another Brooklyn incident, there are two separate videos, from different angles, showing two police SUVs, one of them being blocked and surrounded by protesters who are pelting it with objects. The other police SUV drives slowly into the crowd, after which the SUV that was being blocked suddenly lurches forward slightly.

Here is the overhead… pic.twitter.com/US6Qqhkz3O

However, at a press conference late Saturday night, the mayor defended the right of the officers in the SUV to extricate themselves from a potentially dangerous situation — albeit noting the cops should have “found a different approach.”

But Congressmember Alexandria Ocasio-Cortez demanded that the officers involved immediately be “brought to justice.”

NYPD officers just drove an SUV into a crowd of human beings. They could‘ve killed them, &we don’t know how many they injured.

NO ONE gets to slam an SUV through a crowd of human beings.@NYCMayor these officers need to be brought to justice, not dismissed w/“internal reviews.” https://t.co/oIaBShSC1S

De Blasio blamed “a small number of people” for committing acts of violence against police officers, police vehicles, storefronts and other property. Like Monahan, he said they included “a substantial amount of out-of-towners.”

Saying he had been out in the field observing protests in Manhattan and Brooklyn, the mayor claimed to have seen “a very, very systematic effort by a very few people to create a negative atmosphere. … Those that are out there simply to create violence,” he said, “those who are out there to express hatred toward our police officers, we won’t tolerate that. If you’re out there to create an act of violence…you’re gonna get arrested,” he warned.

De Blasio said he had been in touch with mayors in other cities facing the same issue of small groups of outside protesters bent on violence. Meanwhile, he added, local community members are also saying they don’t recognize the people who are stirring things up.

“We’re seeing it all over the country,” de Blasio said of provocateurs inflaming the protests. “We can see it with our own eyes. … We have to get these violent protesters off the streets.”

During the Occupy Wall Street and Black Lives Matter protests in 2011 and ’14, respectively, the M.O. of the demonstrators was to march all over the city, trying to block traffic intersections, the West Side Highway, Grand Central Terminal and so forth. This would go on for hours and well into the night.

Late Saturday night, de Blasio said the energetic young protesters — the majority of whom were peaceful — had made their message clear and that change would definitely be coming to the city.

But he pleaded with “anyone still out there” to just call it a night and go home.