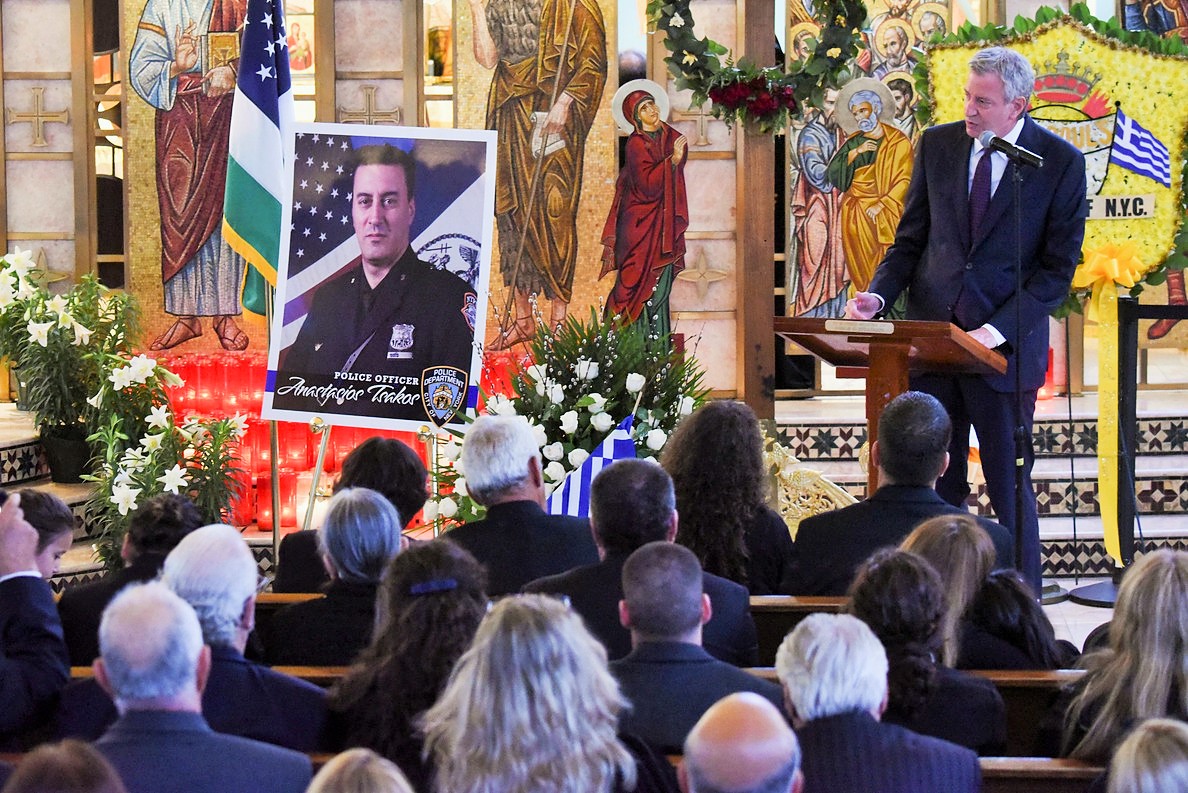 Mayor de Blasio speaking at the funeral of Police Officer Anastasios Tsakos on Tuesday. The officer was killed by a drunk driver in Queens. (Photo by Michael Appleton/Mayor's Office of Photography)

BY THE VILLAGE SUN | Following the funeral on Tuesday of Police Officer Anastasios Tsakos, who was killed by a drunk driver in Queens, Mayor de Blasio announced support for a sweeping package of bills known as the Crash Victims Rights and Safety Act. The legislation, currently advancing through the state Legislature, takes aggressive action against dangerous driving and supports the families of crash victims.

“Officer Anastasios Tsakos should be home today with his wife and his two beautiful children,” de Blasio said. “Instead, yet another life has been taken by a reckless driver. This cannot continue. We must pursue fundamental changes. In honor of Officer Tsakos, I’m calling on the state Legislature to immediately pass the Crash Victims Rights and Safety Act. For Officer Tsakos and every victim of traffic violence on our streets, let’s deliver on the full power and promise of Vision Zero and keep our streets safe for generations of New Yorkers to come.”

Despite the city’s Vision Zero effort to improve street safety, pedestrian deaths are up 58 percent so far this year, 41 versus 26 for the same period last year. This follows last year, in which the city saw its most fatalities from car crashes in the past six years.

Tsakos, 43, was directing traffic on the Long Island Expressway after an earlier car accident when police said he was struck and killed by a car driven by a 32-year-old woman who allegedly admitted she was driving drunk. The driver was slapped with 13 charges, including manslaughter, vehicular manslaughter and driving while intoxicated, and is being held without bail.

“The tragic loss of Officer Tsakos last week really underscored all the work we still have left to do on Vision Zero,” said Hank Gutman, the city’s Department of Transportation commissioner. “From 24/7 speed cameras to tougher standards for drunk driving and so much more, the Crash Victims Safety and Rights Act is the legislative package that honors Officer Tsakos’s memory and meets this moment. I look forward to speaking with state legislators about how its passage will save lives on New York City streets.”

“Creating safer streets for walking and bicycling is key to taking action on climate,” added Ben Furnas, director of the Mayor’s Office of Climate and Sustainability.

Also included in the act is Sammy’s Law, named after Samuel Cohen Eckstein, a 12-year-old boy from Brooklyn who was killed by a reckless driver in 2013. This bill would repeal the current state regulation that prevents New York City from easily setting 15 m.p.h. or lower speed limits on streets where pedestrians and vehicles mix. Each 1-m.p.h. increase in speed results in nearly a 3 percent increase in mortality in crashes. By widely authorizing speed limits lower than 25 m.p.h., New York City would join other U.S. cities such as Washington, D.C., Portland, Seattle and Minneapolis.

The act would also lower the BAC (blood alcohol concentration) limit for driving from .08 percent to .05 percent, and for aggravated driving while intoxicated from .18 percent to .12 percent.

Furthermore, the legislation would allow the city to operate speed safety cameras 24/7.

It would escalate penalties for extreme repeat offenders, including license suspension.

The legislative package would additionally include a vehicle safety rating. The state Department of Transportation and state Department of Motor Vehicles would be required to create a pedestrian safety rating system showing the risk a motor vehicle’s design poses to pedestrians and cyclists. These ratings would be required to be prominently displayed at the point of sale and on a state Web site.

The act also would provide a clear definition of what a “safe distance” is for motorists when overtaking bicyclists on the road (at least 3 feet), provide a mechanism for accountability following a crash, and “foster a culture of safer driving through education.”

In that vein, there would be a DMV pre-licensing course to provide street safety education, starting when applicants get their driver permits. As part of drivers’ pre-licensing courses, they would be educated on how to safely pass bicyclists on the road and the dangers that large multi-ton vehicles pose to pedestrians, cyclists and other vulnerable road users.

“We have partnered with the de Blasio administration to launch Vision Zero and on our long-running campaign to secure and expand lifesaving speed safety cameras,” said Danny Harris, executive director of Transportation Alternatives. “We are very grateful that he is fully supporting the Crash Victim Rights and Safety Act this year in Albany. Our just recovery and the lives of New Yorkers depend on the state Legislature passing this package of bills this session, and we will continue to work with our partners in Albany and the de Blasio administration to expand the promise of Vision Zero on our streets.”

“This year is one of the deadliest years for traffic fatalities in nearly a decade,” said state Senator Andrew Gounardes. “These bills will save lives by holding reckless drivers accountable, prevent speeding through automated enforcement, teach the next generation of drivers how to share the roadway properly and much more.”

“At least 243 New Yorkers lost their lives due to car crashes in 2020, the deadliest year on record since 2014, yet Albany still won’t let New York City lower its speed limits,” state Senator Brad Hoylman said. “My legislation, Sammy’s Law, included in the Crash Victims Rights and Safety Act, would change that. Reducing traffic speed is a proven way to make our streets safer, especially as the pandemic has led to increased car use, bike ridership and outdoor dining. I’m grateful the Mayor’s Office supports the Crash Victims Rights and Safety Act and I appreciate the work of Families for Safe Streets, Transportation Alternatives, Mothers Against Drunk Driving and New York Bicycling Coalition to turn these pieces of legislation into law.”

“Reckless, dangerous driving is an epidemic on our streets,” Assemblymember Linda Rosenthal said. “A new study released by Insurify Insights concluded that four of the five boroughs (Staten Island 1, Bronx 2, Brooklyn 4, Manhattan 6) are among the top 10 most dangerous cities in the country for pedestrians. While Vision Zero has improved street safety, more needs to be done. We all deserve to live in a city in which the streets are safe and families don’t fear for their life every time they cross the street.”