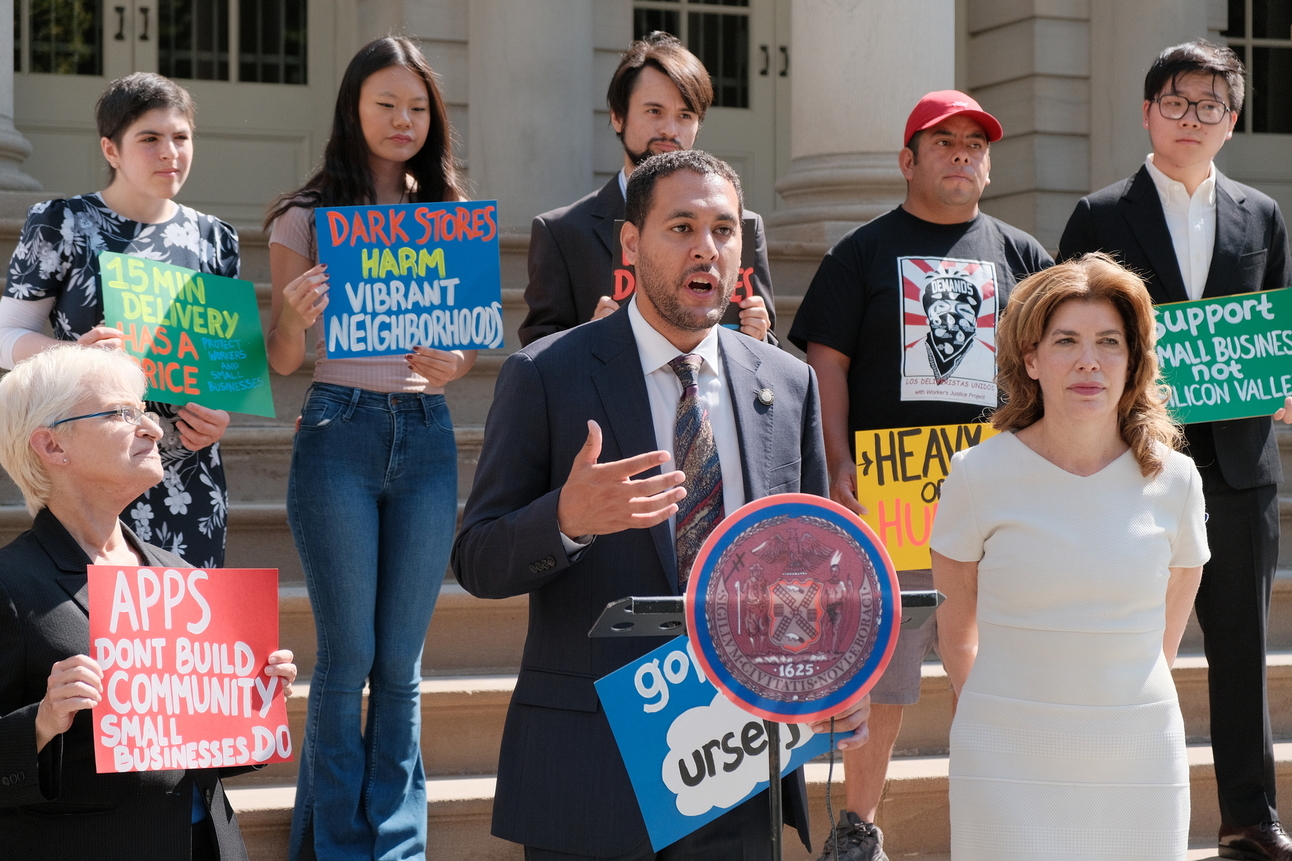 Councilmember Christopher Marte and Julie Menin, to the right of him, announced the new legislation on July 14. (Councilmember Marte's Office)

BY THE VILLAGE SUN | Following what they say is “a global trend of backlash” against 15-minute delivery apps, Councilmembers Christopher Marte and Julie Menin have introduced a package of legislation to regulate so-called micro-fulfillment centers, commonly known as dark stores.

Dark stores take over vacant storefronts, the numbers of which increased during the pandemic, and compete with local small businesses, such as delis and bodegas. In the last few years, more than 100 dark stores have opened throughout New York City. These stores, Marte and Menin charge, have engaged in “predatory pricing,” offering steep discounts with which local grocers cannot compete with.

Some of these new companies, such as Gorillas and GoPuff, have previously claimed that delivery is guaranteed in under 15 minutes, which, the councilmembers charge, endangers delivery workers and pedestrians. Indeed, a frequent quality-of-life complaint of Downtowners is electric bikes and motor scooters zipping all over the place — going the wrong way on the street, riding on sidewalks — as they rush to make their food drop-offs.

The legislative package of three bills were introduced at the City Council’s stated meeting on Thurs., July 14.

One bill, sponsored by Marte, would set a weight limit of 22 pounds for deliveries since, the councilmember argues, heavy packages cause long-term health impacts to workers, plus put them in greater danger if they get into a traffic accident.

Another bill, co-sponsored by Marte and Menin, would require apps to disclose that the 15-minute delivery time is an estimate — and not a promise — in order to set expectations for customers and remove time pressure on delivery workers.

Finally, the third bill, sponsored by Menin, would regulate micro-fulfillment centers by giving the city’s Department of Consumer and Worker Protection the ability to issue and revoke licenses, including for if a business engages in misleading advertising or deceptive trade practices. Dark stores that violate license conditions could also be subject to penalties and fines.

Often backed by venture capitalists, the delivery-app companies are in direct competition with bodegas and delis and cater to “gentrifying demographics” in neighborhoods like the Lower East Side and Chinatown, the councilmembers charge.

Marte and Menin note that since they announced their intent to regulate them, dark stores have altered their business practices by taking down the posters that once covered their entire windows, and some locations now allow customers to purchase items inside the store. One of the businesses on W. 14th Street has one storefront for deliveries and another right nearby in the same building for walk-in customers.

Marte’s father ran a bodega on Rivington Street when the councilmember was growing up.

“Micro-fulfillment centers and 15-minute delivery apps are trying to flip our immigrant neighborhoods into storage yards for Silicon Valley,” Marte said at a City Hall steps press conference before the bills were introduced. “Storefront vacancies are abundant in Chinatown and the Lower East Side because of the devastating economic impact the pandemic had on these low-income communities. Our neighborhoods need investment in order to recover, but instead tech company vultures have swooped in to pick at our wounds. This legislative package is an essential crackdown on this tech-backed exploitation of our city’s storefront vacancy crisis, our delivery workers and our immigrant-owned bodegas.”

Menin is chairperson of the City Council’s Small Business Committee.

“As a former small business owner and former commissioner of the Department of Consumer and Worker Protection, I personally understand the difficulties that so many business owners face,” Menin said. “Our small businesses do not have major financial backing as dark stores do from venture capitalists. Small business owners shouldn’t be struggling by competing for customers by operating micro-fulfillment centers that essentially operate as warehouses without any regulation. Today, we stand here to send a message that this emerging industry will not operate in a lawless atmosphere unregulated.”