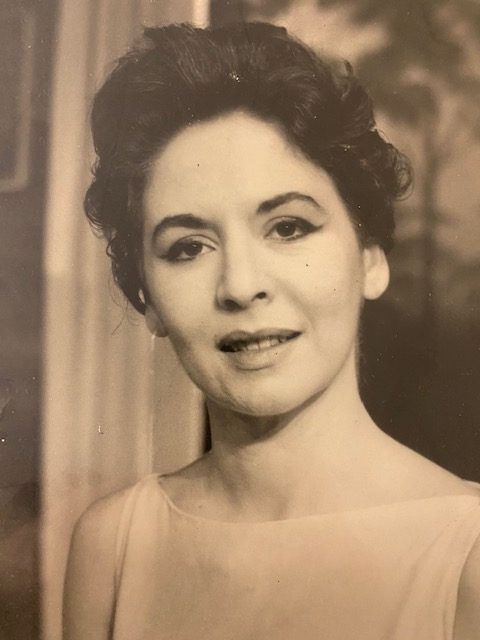 BY LINCOLN ANDERSON | Marie Rupert, a theater actress and educator who lived in the Village for more than 50 years, died on March 25. She was 90.

Her son Alexander Rupert said that she died at home at 125 Christopher St., where she and her young family moved in 1969. Nine years ago she was diagnosed with Alzheimer’s disease. In recent years, she had 24-hour home care.

During her acting career Marie Rupert was known as Marie Andrews. Her husband, Gene Rupert, was also an actor. Marie worked more in Off-Broadway theater. Gene, who was from Detroit, was a Broadway actor and the more well known of the two. He died in 1979.

Alexander Rupert recalled how his family landed the Christopher St. apartment, which had belonged to Dan Wolf, a founding editor of the Village Voice. At the time, Alexander was a student at St. Luke’s School, across the street.

“We got the apartment because the parents of one of the kids I went to school with, Wolf, were moving into a condo in the East Village,” he said. “They made an announcement about it.”

It was an extra-large apartment: Because Wolf was on good terms with the landlord, he was allowed to enlarge the two-bedroom by expanding it into a studio, as Alexander recalled.

Marie Rupert was involved with St. Luke’s School, where her other son, Peter, was also a student. According to Alexander, she was a moving force behind creating and sustaining the St. Luke’s Thrift Shop, which survives to this day. Also, after discovering that Alexander had dyslexia and finding a place that treated it, she helped identify other dyslexic St. Luke’s students and connect them with treatment, as well.

Marie Rosa grew up in Queens during the Great Depression. Her parents, who were second cousins, had immigrated from Sicily. They changed their last name from Cantazaro, fearing discrimination in America because it sounded “too ethnic.”

Marie became an acrobat at age 19. This involved “walking on her hands, flips and handstands” and the like, according to her son.

She went to Queens College. A first marriage with an acting student didn’t work out.

But she and Gene eventually met onstage in the play “Bus Stop,” in which they played the leads.

“They immediately fell in love,” Alexander said. “I was like on summer stock with them until I was 12. So it was like a gypsy caravan family, that’s what it felt like; growing up with other actors’ families. I saw most of the country by the time I was 12.

“Cherry Lane Theatre in the Village,” he recalled, “they would tell stories about when they first started working, it was a dirt floor.”

A highlight of Marie’s career was an appearance in a 1961 television episode of “Playwright at Work,” with Lorraine Hansberry. Marie played the role of a plantation owner’s wife in Hansberry’s “Toussaint,” a work in progress about the Haitian Revolution.

“She was really a diva,” her son said. “She looked like Elizabeth Taylor and acted a little bit like Joan Crawford. When she entered a room, she had presence. She was stunning. She really had an Elizabeth Taylor look, with doe eyes.

“Dad was the bigger name,” Alexander noted. “He was the narrator in the second cast of “The Fantasticks.” He did “Promises, Promises” and “An Evening With Richard Nixon” on Broadway…was a spokesperson for Country Time [Lemonade], Toyota, Geritol.”

From the mid-1970s to mid-’80s, Marie left acting to teach theater and speech as an adjunct at John Jay College. After Gene died and her sons had grown up, though, she returned to acting.

She was involved with the Episcopal Actors Guild and the Perry Street Theater, the latter which was then owned by Miranda D’Ancona.

Marie Rupert loved the Village, its arts scene and its personalities.

“She knew all the characters in the Village,” her son said, “like Billy Kerr, who walked around the Village with a boa constrictor. He was a Vietnam War vet. … It was a real place, full of artists and actors. You had to go to the butcher, the baker and the candlestick maker, not supermarkets.”

In later years, Marie enjoyed going to the theater with friends to take in shows. A favorite was Polaris, a basement theater space off of Hudson St.

“They would go to Sardi’s and the Players Club all the time,” Alexander said.

Marie’s father, who worked as a welder on the World Trade Center, had two mistresses, one of whom had a son with him. But Marie and her half-brother were not close. He only would drop by to visit every 10 years or so, Alexander said.

Alexander said his mother was happy that both her sons went into the arts, he as as visual artist and his brother as a jazz guitarist. Peter died in 2010.

Her son said his mother would be cremated. He planned to do a ceremony, “something nature-oriented, like a rebirthing,” in an outdoor setting.