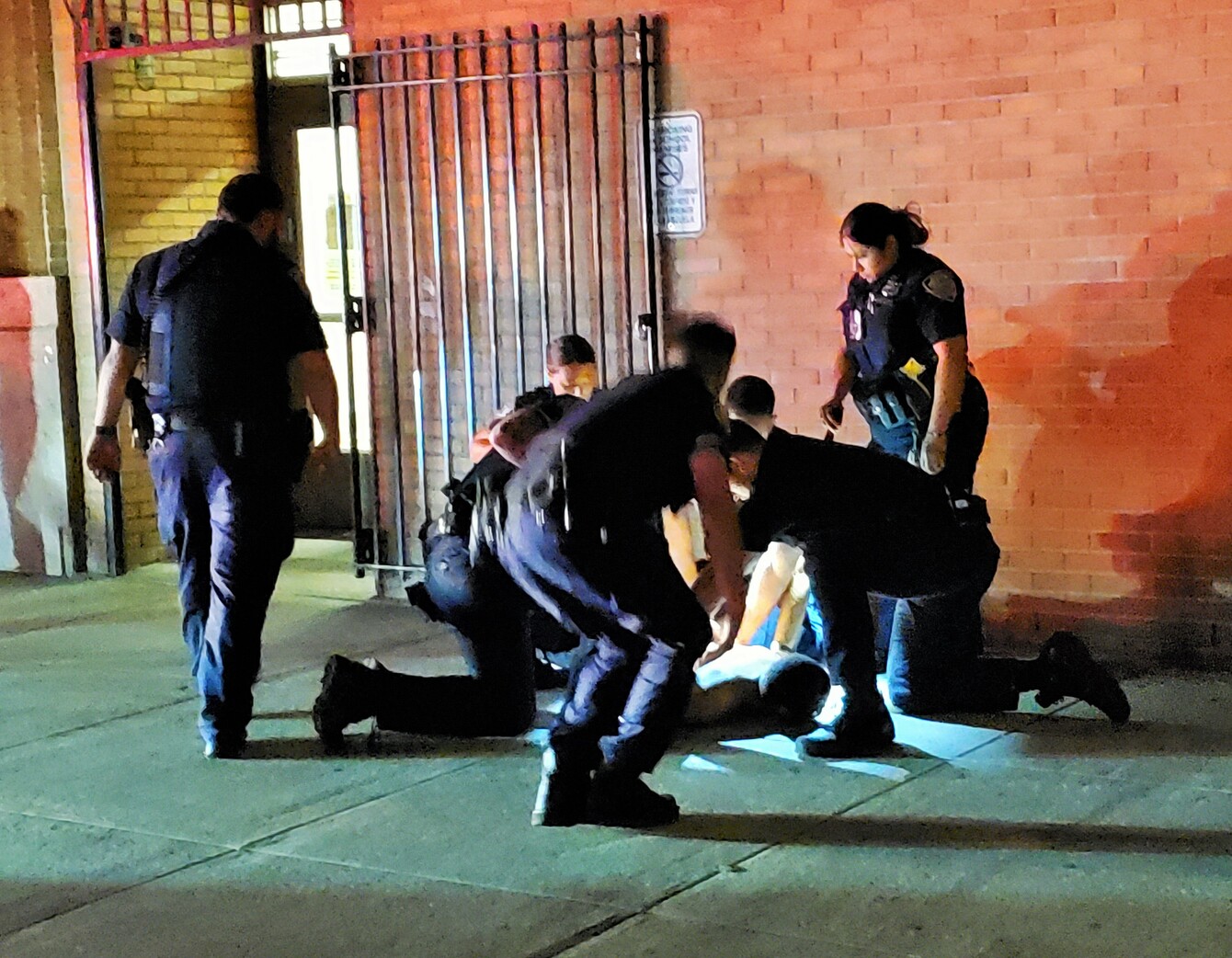 A group of officers start to stand up after having held down a man who was charged with assaulting his partner. (Photo by The Village Sun)

BY THE VILLAGE SUN | Shortly after 9 p.m. on Wed., July 20, a fairly large number of police arrested a man near the Veterans Affairs Hospital, in Kips Bay, after he had allegedly struck his partner.

As he was being arrested and being held down on the sidewalk on the north side of E. 23rd Street just east of First Avenue by around a half dozen police officers, the man was shouting.

Eventually, the officers all stood up and let the man up.

After they all were on their feet, the man under arrest, although handcuffed, challenged one cop, who was taller than him, glaring into his face.

“You think you’re something?” he said. “I’m gonna show you.”

The officer looked away.

A number of onlookers were drawn by the man’s shouts and by the fact that he was being pinned on the pavement by the group of officers. They stood around observing the arrest, some filming it on their phones. One of the witnesses, believing the man was on drugs, shouted for him to take it easy.

An officer at the scene told The Village Sun, “He hit his girlfriend in the park,” nodding east down E. 23rd Street.

Eventually, an ambulance pulled up and an E.M.T. strolled over to where the cops were. But they instead put the man into a police car. An officer said the ambulance actually was for the woman who had allegedly been hit. However, a woman and two young children were spotted getting into a different police car, with the kids putting their kick scooters into the car’s trunk.

As the police were dispersing, another officer at the scene declined to provide further details about the arrest.

A police spokesperson later told The Village Sun that Andrew White, 33, was arrested for punching his partner in the face at 423 E. 23rd St., the V.A. Hospital’s address. The victim did not require medical attention.

White was charged with assault and criminal possession of a controlled substance. Asked what kind of drug it was, the spokesperson said she could not say with certainty since it still needed to be tested, but she stated, “We’re alleging that it’s cocaine.”