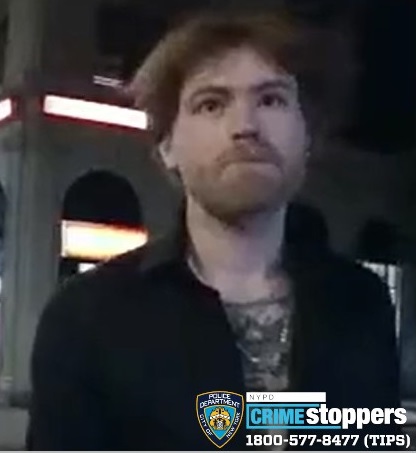 A surveillance image of one of the alleged attackers. (Courtesy N.Y.P.D.)

BY THE VILLAGE SUN | A man was left in critical condition with a fractured skull after he was punched from behind by two separate attackers in the East Village last week.

According to police, the victim, 46, was standing near the corner of E. Fourth Street and Second Avenue around 3:40 a.m. on Wed., May 18, when two younger guys approached him separately from behind and punched him in the face. Each man struck the victim once, knocking him down each time, with each man also then giving him an extra punch in the face as he lay in the street.

The attacks were captured on surveillance-camera video. (Courtesy N.Y.P.D.)

The first man hit the victim, then flung him down onto the street.

The second attacker appeared to hit the victim harder, sending him flying with his punch. After the victim was laid out, the puncher started to walk off — but then thought to drag the stricken man out of the roadway and onto the street corner, apparently so he wouldn’t get run over and killed by a car.

The victim was removed by ambulance to Bellevue Hospital with a skull fracture and is listed in critical condition.

The suspects are described as around 25 to 35 old.

A police spokesperson said the attacks’ motive, whether the victim knew his assailants or had any prior interaction with them or what they were all doing before the incident are all “unknown” at this point.

Anyone with information is asked to call the N.Y.P.D.’s Crime Stoppers Hotline at 1-800-577-TIPS (8477) or for Spanish, 1-888-57-PISTA (74782). Tips can also be submitted on the Crime Stoppers Web site at https://crimestoppers.nypdonline.org or on Twitter at @NYPDTips. All tips are confidential.