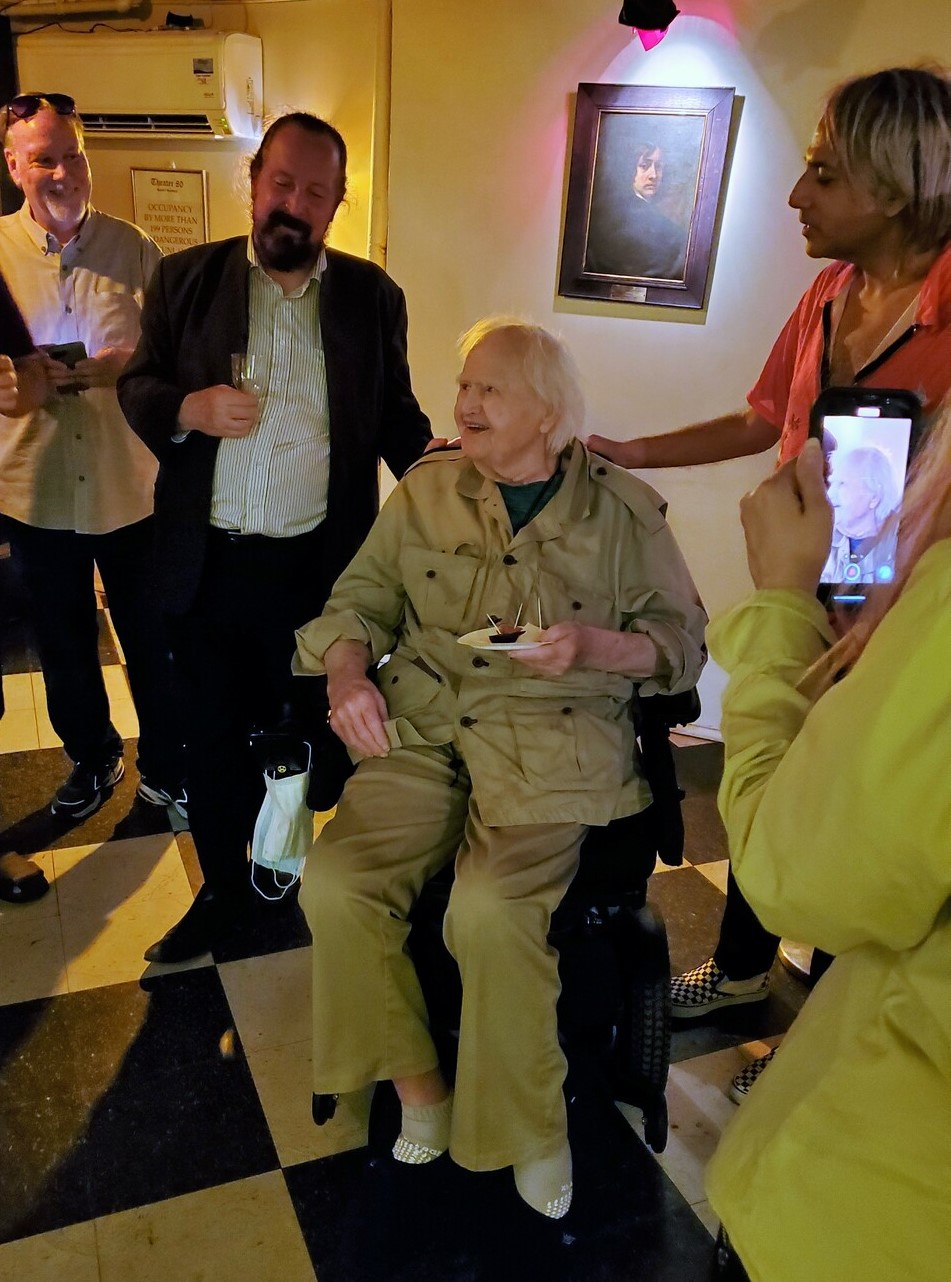 Malachy McCourt tells the story of the overcoat at Theatre 80 St. Mark's on June 30, to the delight of Lorcan Otway, to the left of him, and other friends. (Photo by The Village Sun)

BY LINCOLN ANDERSON | With colorful, ribald stories and full-throated, joyous song, Malachy McCourt was officially installed among the pantheon of luminaries at Theatre 80 St. Mark’s at the end of last month.

Amid the lusty singing of one of his signature songs, “The Wild Mountain Thyme (Will You Go, Lassie, Go?),” McCourt did the honors of signing his name and pressing his palms into a wet slab of cement. Ideally, this would then be added to the sidewalk in front of the theater, on St. Mark’s Place, just east of First Avenue. But the theater’s future is uncertain as a predatory lender seeks to force a sale of the beloved and iconic East Village venue.

With the lender demanding a payment of a staggering $12 million, the place’s proprietors, Lorcan and Genie Otway, have been told they will be evicted on Aug. 26. While Lorcan and the building are in bankruptcy, the theater actually is not. The Otways continue to pray for a miracle.

Despite the looming disaster, spirits were high at the event for McCourt, 90. He’s the last surviving child of the seven offspring of Angela McCourt, who gave her name to his brother Frank McCourt’s Pulitzer Prize-winning memoir of their childhood growing up in crushing poverty in Limerick, Ireland.

Although Malachy these days uses a wheelchair, his spirit remains irrepressible. Among the uproarious, true tales told during the event was the one about the time back in the 1950s or ’60s when McCourt was told he had to check his coat before he could order a drink at a Midtown Manhattan bar. As it turned out, the tavern would rue its inflexible policy: Thoroughly livid, McCourt went outside, got into his car, flung off all his clothes, put his overcoat back on, went back into the bar — and checked his coat.

An actor, writer and former bar owner, Malachy McCourt also ran for New York governor on the Green Party line in 2006. He won less than 1 percent of the vote, finishing third to Eliot Spitzer, who served slightly more than a year before being forced out of office in a humiliating prostitution scandal.

Malachy McCourt wrote two memoirs of his own, including “A Monk Swimming,” which is a mondegreen of “amongst women,” a phrase he misheard as a child from the Hail Mary rosary.

“We’ve been friends since the late Sixties, early Seventies,” Otway told The Village Sun. “He’s produced plays here. He had a bar on St. Mark’s long ago in what was a Termini club, the Five Spot. Our jazz gallery was a Termini club, as well. The Terminis are two brothers who had a few jazz clubs. Their father started their club traditions during Prohibition.”

In a Facebook events listing for the event, Otway wrote, “Historic 80 St. Mark’s Place and Theatre 80 St. Mark’s, the home of the William Barnacle Tavern and the Museum of the American Gangster, presently has a gun, no…a cannon pointed at our collective heads. When times get hopeless we need to remember our heroes ‘who stood with us when history was made.’ And so, we are proud to announce that the great Malachy McCourt is adding his name to the Sidewalk of Stars at Theatre 80. BE THERE in support of this great voice of the Irish American justice-seeking community.”