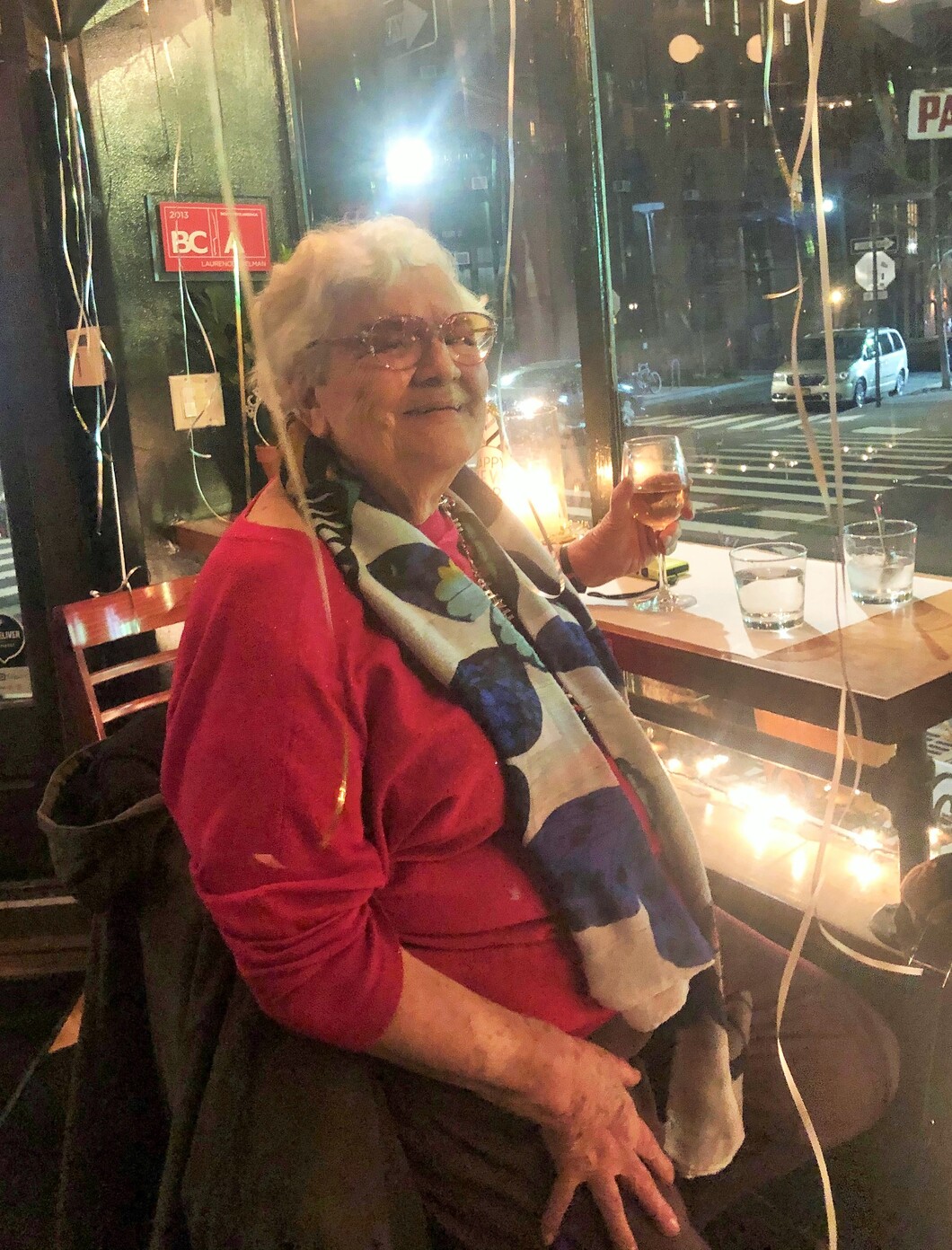 Maggie Berkvist at her "local," the Left Bank.

BY CAROLINE BENVENISTE | Maggie Berkvist (née Bellward) died at Bellevue Hospital on Dec. 9, after surgery to repair a broken hip. She was 94.

Born in Leicester, England, on Sept. 17, 1928, she was an only child, born to parents who were both only children. Her maternal grandmother died in childbirth, so Maggie’s mother was raised by a friend of her grandmother’s. Maggie’s mother left her husband when Maggie was 8 years old.

In a 2014 interview with Michael Minichiello, Berkvist explained how her family situation had shaped her future life: “So I have no connections! I guess that’s what made it easier for me to be footloose and fancy-free.” While she did not have many blood relatives, over her lifetime she amassed a large collection of friends, many of whom considered her family.

She was in England during World War II, and when she was 16 she moved to London and lived there on her own until she married her first husband, Mr. Robin. Together they traveled to Canada on the HMS Queen Elizabeth in 1952. In 1954 she left him and moved to the United States.

Her first job in New York was at McCann Erickson, an ad agency at 50 Rockefeller Center that she likened to “Mad Men.” Two years later she moved to the West Village and started working at The New York Times as a photographer. She was a photo editor there (for the Book Review section and the Magazine) from 1960 to 1979.

From 1980 to 2013, she was a freelance photo editor and researcher at the Times and at Life magazine, and afterward took photographs for WestView News, a monthly publication covering her West Village neighborhood.

Her first stop in the West Village was a basement apartment at 315 W. Fourth St. where her rent was $35 a month. She remained in the same neighborhood except for a brief period when she was married to Bob Berkvist and lived in Brooklyn Heights and on the Upper West Side. When they split in 1965, she returned to the Village, moved to her building on Bank Street in 1967, and in 1969 into the apartment where she lived until her death.

She often spoke of the importance of having “a local,” as in a local pub like folks in England have. One of her first locals was Louie’s, a bar in Sheridan Square. Later, when Louie’s disappeared, she moved on to the 12th Street Bar (now the Cubbyhole) owned by her friend Paula, where she briefly bartended during the newspaper strike of 1979. Over the years she frequented several other spots, including Hudson Hound on Hudson Street. But her final (and most cherished) local was The Left Bank.

The bar opened in 2011 at 117 Perry St., a couple of blocks from her apartment, and almost immediately became her “watering hole.” But as she described to Minichiello, things changed after Hurricane Sandy: “The Left Bank managed to stay open all those nights with just candlelight,” she said. “We were all hanging out like the good old days, talking to one another and giving each other tips on how to survive until the electricity came back on.”

She would appear at Left Bank every evening for cocktail hour. She was loved by the staff and other customers, and she had her own seat near the door facing the window, so she could watch the world and dogs go by. Her love of dogs knew no bounds — she stopped and spoke to their owners and photographed them, and it was not unusual for dogs to stop in to greet her when they were out on their walks. In 2018 at her birthday party at Left Bank, a plaque was installed at her regular spot.

In March 2020 when New York City started shutting down, Maggie set out to document the changes to the neighborhood with photos she would take on her “walkabouts.” She sent her first e-mails to a small group, but soon the “bulletin” expanded to more than 50 recipients. Remarkably, Maggie kept the daily bulletins coming for more than six months, and after that continued them with decreased frequency.

During those difficult times, Maggie’s e-mails were sometimes the only bright spot in the day. She meticulously chronicled the changing streetscape. She highlighted openings and closings. She contrasted the early scenes of deserted streets with the nascent activity once the city started to open up again. She met even more dogs, stopping to talk to all their owners. And there was a plethora of flower photos, their riotous colors jumping out from the screen. Soon many of her readers started to send their own stories and photos to Maggie, who would expertly weave them into her missives.

Fortunately, by the summer of 2020, restaurants began to open up for outdoor dining, and Maggie claimed a spot in the Washington Street shed at Left Bank. And from her spot in the shed she met even more people and dogs, and it was not unusual to walk by at cocktail hour and see Maggie surrounded by a jolly crowd.

Maggie is survived by her beloved cat, Jefferson, who is still looking for his new forever home. Maggie truly fostered a sense of community in our neighborhood, and she will be missed by many.