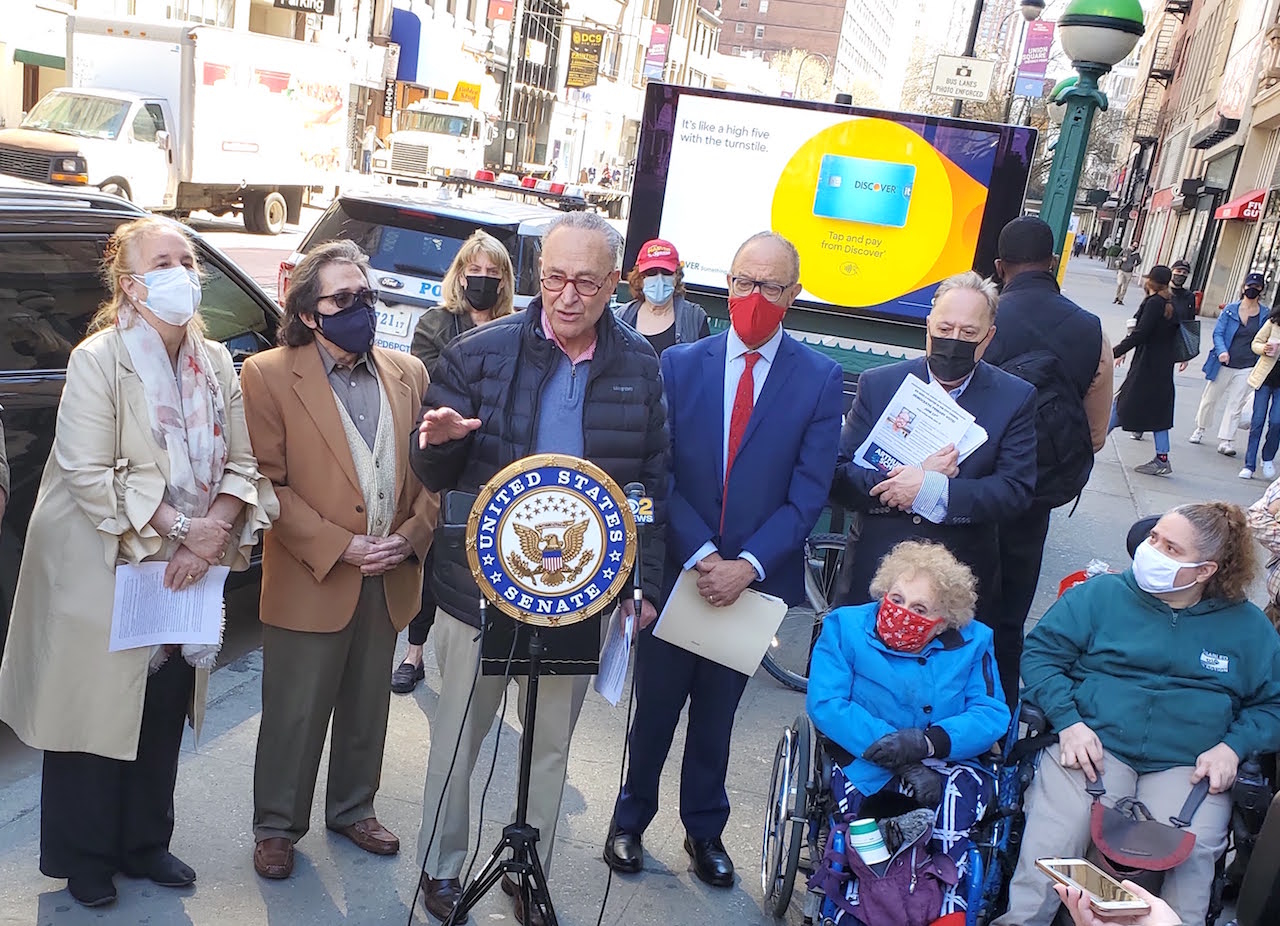 Senate Majority Leader Chuck Schumer told the F.T.A. to "stop stalling" and move the funding to allow subway elevator construction on 14th St. at Sixth and Seventh Aves. (Photo by The Village Sun)

Not only that, but in addition to the Sixth Ave. elevators, the M.T.A. has now also committed to “bundling” into the overall project the installation of elevators at the Seventh Ave. subway stop, serving the 1, 2 and 3 trains.

There’s one hitch, though: The funding for the project still needs be finessed. In short, already allocated federal money needs to be shifted to allow the M.T.A. to use it for the new elevators that will serve the Village/Chelsea 14th St. stations. The Federal Transit Administration must authorize the reallocation. That’s where Schumer comes in.

After hearing that the cash was there but just needed to be shifted, Schwartz, who is running for City Council in District 3, reached out for help to the powerful Senate majority leader, whom he has known for 23 years.

Since Saturday was the first day of Passover, Schwartz did a biblical riff.

“So today we celebrate the addition of six more elevators,” he said. “We are like the Jews crossing the Red Sea. We need to get to the other side, and Moses Schumer will get us there. And then when we get there we will say, end the discrimination against the disabled everywhere, not just here in Greenwich Village and Chelsea.”

In response, Schumer quipped that Schwartz was “Aaron,” Moses’ brother, who helped him lead the Israelites out of Egypt.

Urging the F.T.A. to move the funds ASAP, Schumer said, “Stop stalling!” He held up a letter he wrote about it to Nuria Fernandez, the F.T.A. acting administrator, adding, with a smile, that when he writes letters like this, they usually get results.

Schwartz has been keeping the heat on the M.T.A. since reaching a settlement with the agency over a lawsuit he brought back in 2018 regarding the Sixth Ave. lifts on behalf of disabled advocates.

Only about one-quarter of New York City’s subway stations are fully accessible.

“Although it was late, this was an even better deal because now we are getting elevators at Seventh Ave. and 14th St. for the 1, 2 and 3 trains,” the Village attorney said.

Brewer said each victory for accessibility is significant, for the disabled community and beyond.

“Every time an apartment is made accessible, it’s good for the entire community,” she said. “Every single subway station should be accessible; it sets a model for everywhere else. We couldn’t do it without Arthur Schwartz, 504 [Democratic Club] and Chuck Schumer.”

“Every elevator is a blessing,” said Milagros Franco, a member of Disabled in Action. She lives on E. 24th St. and uses the L train to visit her fifth-grade teacher, who lives in Brooklyn, and, as she put is the “mother of my heart.”

“Ecstatic, ecstatic,” was how Robert Acevedo, also a member of Disabled in Action, described his feelings about the Sixth Ave. station becoming accessible. He lives on W. 28th St. and said he looked forward to being able to take the F train at Sixth Ave.

A former security guard, a hereditary form of ataxia hit Acevedo in 2008, and he has since gone from using a cane to a wheelchair.

He said he much prefers to the subway to Access-A-Ride because, with the latter, “they take you on a tour of Manhattan.”

The saga of the elevators stretches back more than six years, when the M.T.A. was planning to shut down the entire L-train line in Manhattan — dramatically dubbed the “L-pocalypse” — to make Sandy-related pairs to the line’s East River tunnels. During the repairs, some station upgrades were also planned.

At that time, Schwartz sued under the Americans With Disabilities Act on behalf of Disabled in Action and the 504 Democratic Club — a political club whose members are disabled — since the L-train shutdown plan only called for the the installation of one elevator in Manhattan, at First Ave and 14th St.

The M.T.A. settled the suit quickly, agreeing to build elevators for the L and F/M subway stops at Sixth Ave. and 14th St.

The project was supposed to start by Dec. 31, 2020, but it didn’t happen. A few months earlier, sensing that there would be a delay, Schwartz had written to the M.T.A. In fact, the agency had apparently “forgotten” its pledge.

Tom Quigley, the M.T.A. general counsel, responded that while the pandemic had slowed things down, the agency actually had located federal funds that, although currently committed to other projects, could be used for this one. Bundling the Seventh Ave. and Sixth Ave. elevator projects together would “take advantage of efficiencies and reduce public impact,” Quigley told Schwartz.

On Feb. 16, before actually locking down the federal funds, the M.T.A. put out a bid for contractors, so that the work would be ready to go once the funding was settled.

According to a press release from M.T.A. Construction & Development, the three stations will have “full vertical accessibility,” in accordance with the A.D.A.

“Ensuring every New Yorker has access to our transit system is an absolute necessity,” said Quemuel Arroyo, M.T.A. chief accessibility officer. “All of us at the M.T.A. continue to work toward a completely accessible system.”

In addition to the installation of elevators, work at the stations will include, among other things, electrical power upgrades and station communications systems upgrades, if necessary; replacement, relocation and/or addition of staircases from street to mezzanines and mezzanines to platforms; and reconstruction of entire platform edges and/or reconstruction of A.D.A. boarding areas.